Introduction to QoS-Classification and Marking

In its simplistic form, QoS is the ability to differentiate diverse classes of traffic based on predefined or user-defined criteria and assign priorities based on traffic variables that affect the treatment of traffic on each router in the network. QoS, when implemented, becomes a requirement for end-to-end service delivery. In some cases, QoS might not be chosen for implementation in networks with excess bandwidth on links. However, it is recommended practice to implement QoS where different classes of traffic are to be transported across the SP network.

The first and foremost step in the deployment of QoS is to identify the various traffic classes that need to be supported by the network. Traffic can be classified based on type of traffic (voice, applications, data, etc.) and on properties of the traffic pattern. After traffic has been classified into different classes, the next step is to identify what QoS operations will be performed on each of these classes on the local router. Note that although QoS is an end-to-end implementation, it is traditionally configured on all routers in the path from one end to the other. However, various portions of the network can be configured with different QoS schemes to handle different types of traffic. The process of defining the QoS operations for a certain traffic class is also called Service Policy definition. Finally, after the policies are defined, they are applied on the device interface. Implementation of QoS, therefore, involves the following steps:

In the Diff-Serv model, the routers or L3 switches in the network are configured for QoS policies that can be applied to a traffic class traversing the router. Simplistically, traffic classes can be defined by the type of traffic, such as voice, video, and data. Data traffic can also be segregated into different traffic classes based on the type of data (application versus best effort) using QoS. This mechanism where the router classifies and then applies a QoS policy based on the classification is often called the Per-Hop-Behavior (PHB) of the router.

Classification is the first step in the implementation of QoS. The criteria used to classify data can be based on the IP header values such as the IP address ranges, IP Precedence, DSCP, CoS, or, more recently, MPLS EXP bits. In the classification stage, the router identifies traffic that will map to each of the classes to be configured.

Following classification, the router can also perform marking of packets that map to a certain class. In the marking action, the router associates the packet with a unique parameter after identification of traffic pertaining to a class. This unique parameter will be used in subsequent routers to identify or, in QoS terms, classify the traffic. The common marking options available on Cisco routers and switches are IP Precedence, DSCP, CoS, ToS bits, QoS group, and MPLS EXP values.

Figure 13-1 shows the IPv4 packet header with an 8-bit type of service (ToS) field. The ToS field was conventionally used to provide QoS in IP networks. However, since the advent of the Diff-Serv model, it has been replaced by the implementation of IP Precedence or DSCP values.

The most important values for IP Precedence in the implementation of QoS are the Critical, Flash Overrides, and Flash priorities. It is common practice to implement an IP Precedence of Critical (5) for VoIP traffic or time-sensitive/real-time traffic, Flash override (4) for video traffic, and Flash (3) for higher class data traffic. All other traffic is usually mapped into best-effort or routine (0) traffic.

DSCP, as shown in Figure 13-1, is an extension of IP Precedence and can be still coded in context to the ToS value in an IP header. The DSCP value is the IP Precedence implemented along with a Delay, Throughput, and Reliability variable. DSCP is 6 bits in length and functions as the higher order 6 bits of the ToS byte. Therefore, the higher order 3 bits of the ToS byte as well as DSCP map to IP Precedence. In the implementation of DSCP, the delay and throughput variables collectively are called the drop probability. The reliability bit is not used in DSCP implementations today and is usually set to a value of 0. The most common values of DSCP that you will implement are the expedited forwarding (EF) as well as the assured forwarding (AF) classes. 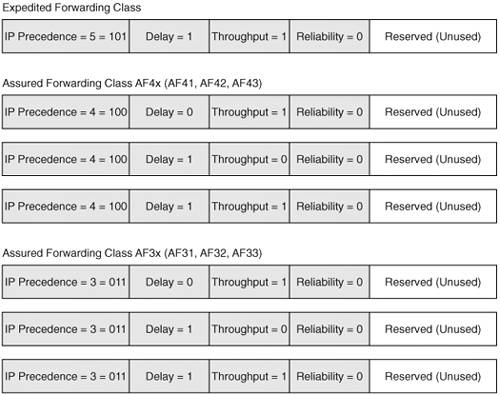 The AF classes for IP Precedence 2 and 1 can be derived by replacing the IP Precedence bits with 010 or 001, respectively. (For brevity, Figure 13-2 does not depict this).

When traversing from an IP domain to an MPLS domain, IP QoS can be mapped to MPLS QoS using the MPLS EXP bits in the MPLS labels. As mentioned in Chapter 1, "MPLS Overview," the 3 bits map one-to-one with IP Precedence values. Therefore, when transitioning an IP domain containing DSCP markings versus IP Precedence markings, if more than one DSCP value is used per AF class, care must be taken to preserve granularity of the IP QoS as it traverses the MPLS domain because more than one AF subclass (for example, AF41, AF42) might map to the same MPLS EXP bit marking. The format of the MPLS label has been depicted in Figure 13-3.

It is important to note that in the implementation of label stacks, matching of data pertaining to a premarked MPLS EXP value can be done only on the top label in the label stack. You will be provided with more information in the following sections on how label stacks and QoS implementations work in tandem.

When implementing QoS, a common term used is queuing. Cisco offers a variety of queuing strategies that manage resources where congestion might occur. In traditional networks, the transition from a LAN (10/100/1000 Mbps) to a WAN (T1/T3/OC-x) makes the gateway in between a congestion point. In such cases, queuing might be configured on the gateway at the network edge where the enterprise network connects to the SP network for intersite or Internet connectivity.

Congestion management is the process of selectively queuing packets on routers so that the higher priority packets associated to a class are transmitted first during congestion. It is assumed that the reader understands various queuing strategies such as priority queuing (PQ), custom queuing (CQ), weighted fair queuing (WFQ), class-based weighted fair queuing (CBWFQ), low latency queuing (LLQ), and modified and weighted deficit round robin (only on Cisco 12000 series). Coverage of the nuances of these queuing strategies is beyond the scope of this book. For more information on these queuing strategies, visit the Cisco Systems website at Cisco.com.

Congestion avoidance is the process of selectively dropping packets prior to the queues reaching 100% of their maximum queue depth, at which time all subsequent packets are dropped. This process of dropping all packets when the queue is full is called tail-drop. Within each queue, depending on the queuing strategy, a minimum and maximum threshold can be configured so that, between these thresholds, the packets are dropped at increasing probability. The mechanism used for congestion avoidance is called Weighted Random Early Detection (WRED), which to a large extent overcomes tail-drop issues per queue on a router. When queuing is performed on a router interface, tail-drop occurs per queue in the absence of random early detection. With random early detection, the queue never reaches 100 percent of its depth and, therefore, no tail-dropping of packets occurs. Different WRED probabilities can also be associated to various queues on a per interface basis that enables differential dropping of packets per class associated with a certain queue.

The following congestion management and avoidance schemes can be used in conjunction with MPLS:

In summary, the QoS mechanisms that are performed on a packet, also called the PHB or per-hop behavior, can consist of the following functions:

Figure 13-4 outlines these QoS functions and how they can be implemented on a router.