See where it happened with BBC News and Google Maps.

Human beings have spent most of their time in small groups of 100-odd individuals, and our information-processing abilities came from those experiences, not from our current world. If we want to keep track of disturbances in Denmark, fog in Finland, elections in Istanbul, and war all over, we need tools to help us: assisted cognition.

At http://boneill.ninjagrapefruit.com/wp-content/bbc/newmaps/ you can see the locations associated with the last 12 hours of BBC news, as shown in Figure 3-1. As with most cartographic efforts, there is the nearly inevitable, but still regrettable, focus on just one placeso the last 12 hours of BBC news will generally be more interesting if you prefer news of the British Isles.

Clicking on the markers brings up an information window like that shown in Figure 3-2. This includes the lead from the story, as well as date and time information and a link to the full story. As we can see, human interest and soft news can make an appearance!

This hack is possible because, well, the BBC rocks. They have decided that their responsibility to the public trust means they need to open their content to the public. See http://backstage.bbc.co.uk/ for data and ideas so that you can "build what you want using BBC content." This is the heart of the Web 2.0 conceptthe idea that open APIs and open formats allow us to make more use of and draw richer connections between the vast amounts of information that are already out there on the Internet.

Figure 3-1. Geolocations for the last 12 hours of BBC News 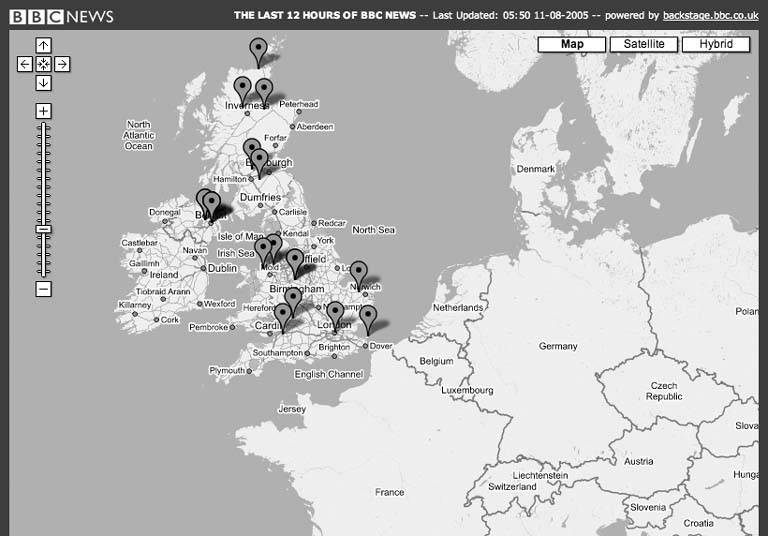 Figure 3-2. Not all geolocated news is created equal 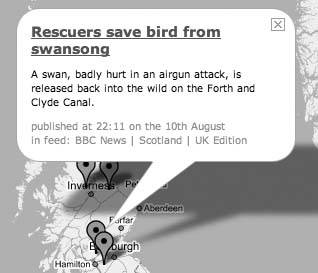 In 2003, the BBC announced plans to open their archives of radio and television programs for non-commercial use. Its intent is good, but sadly there are issues that must be worked out. Ben Hammersley wrote a stirring call to action for the Guardian at http://www.guardian.co.uk/online/story/0,,1522351,00.html.

The archive, Ben writes, "is a vault of the most important public culture of the past three generations. It is a gift for the future that is so far-sighted, and so much a good thing, that it is the duty of the BBC and, especially, the government to follow through."

What's more, "[d]igital technology not only makes the Creative Archive possible, but by doing so makes it a moral imperative." Mapping the news is an example of something we can do now, with just the textual content. Imagine the possibilities of geocoded audio and video!

As Ben's article concludes, "Now that we can, we must."