Plotting your GPS tracklogs on Google Maps allows others to see where you've been.

Sharing tracklogs and waypoints from your GPS receiver became a lot easier with the invention of the GPX format, which is an open XML standard that encodes your GPS wanderings to a file readable by many applications. The best waypoints are pubsso why not plot them on Google Maps, as in Figure 4-22?

Figure 4-22. Some waypoints of London pubs, shown in Google Maps 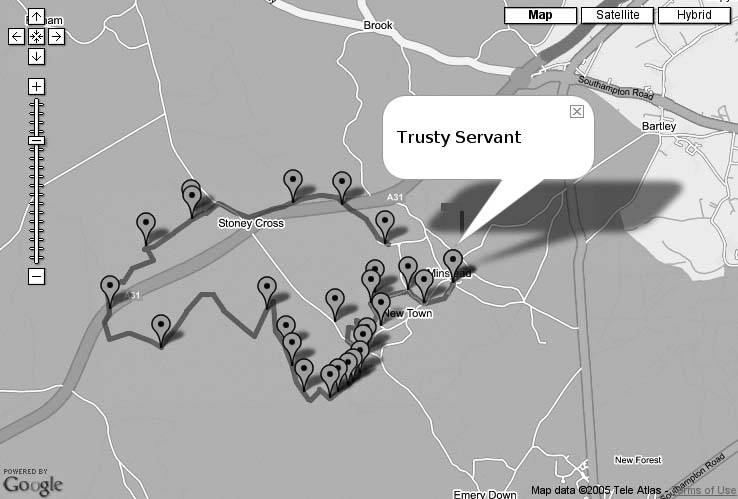 You can go to http://www.tom-carden.co.uk/googlegpx/ and upload your own GPX format file. Any waypoints appear as marker pins, and the start and end of tracks will be marked with pins, as shown in Figure 4-23. 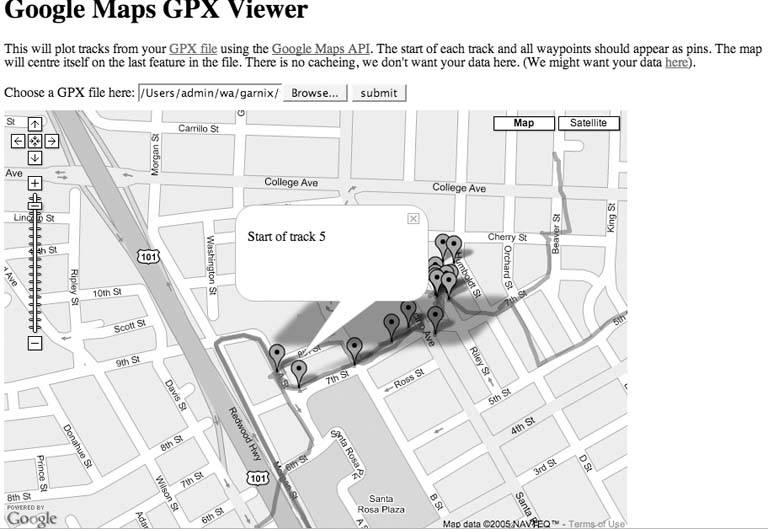 There are several ways to process a GPX file into something Google Maps will understand, and we demonstrate two methods here. Using server-side processing, you upload the file from your browser and process it on your server (in this case using Ruby) and return a script that displays the data. Alternatively, you can put the GPX onto your own server and use some JavaScript to open it, process it on the client side, and pass it to Google Maps. The usual caveats for passing information around in a browser applythere are restrictions on what scripts are allowed to accessbut old friends like the iframe element and new friends like XMLHttpRequest can help us here.

No matter what method you use to process the GPX data, a GPX file will typically contain thousands of pointsfar too many for Google Maps to handle. Why is this? When you display polylines in Google Maps, your vectors are rendered into an image file on Google's servers. The more points, the more time it takes to generate the images. Except this isn't the whole storyGoogle only does this if you aren't using Internet Explorer. IE has a built-in vector language called VML, which renders the vectors very quickly in the browser.

Being fans of Firefox and Mozilla, for us it wasn't good enough to rely on IE. Therefore we thought up a way to selectively choose which points to display so we didn't have too many, yet had enough to show the route without slowing Google down. A seemingly obvious solution would be to simply drop every fifth point to reduce the number of points by 20%but the problem is that one of those ignored points might be the crucial part of a turn or otherwise cause distortions of the route.

Consider another scheme in which points are intelligently dropped on straight lines but not on complex bends. In this scenario, successive points in a straight line add little information to a route and may be forgotten. Points that turn direction quickly would then be kept as they are more important than those that only reinforce a straight line. The key here is determining the amount of change in direction in order to pick those points that should be displayed.

You could simply choose an angle and choose successive points based on whether the path they mapped out deviated more than that angle, and it's a good choice. The problem, however, is that a GPX file may have 1,000 or 10,000 points within it, and these must be mapped down to a sufficiently small number of points to actually plot in both cases because Google Maps can't plot too many. And so we developed an adaptive algorithm that gets a good number of points to display.

Before describing the algorithm, we should be honest and point out that this hack doesn't choose points based on angle, but something a little more crude that is effectively equivalent. Instead of angle, it is the difference vector between successive line segments. What does that mean? Perhaps the diagram shown in Figure 4-24 will help.

Figure 4-24. One method for simplifying tracklogs for display 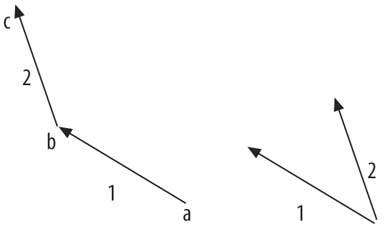 Consider three trackpoints recorded by your GPS unit, where you travel from a to b to the bottom of c. Take the vector 2 between b and c, so that it starts at a and you can compare the vector 1 between a and b to it. Notice the dashed line between them. This dashed line is the difference between the vectors. It's like the angle between them but both quicker to compute and sufficient, because we only need a rough guess to figure out the change in direction.

There is one final fact we must admit, which is that these vectors are laid out in linear latitude and longitude. So when you're in London one degree in latitude is a different absolute length (say, in meters) than one degree in longitude. You could equalize these but for our purposes it doesn't matter that much.

Back to that adaptive algorithm: we choose a small number as a threshold for the length of that dashed line. Then, for every successive pair of line segments in a GPX track we see if the dashed line is bigger than our threshold. If it is bigger, then we include the point; otherwise, we forget about it. By going through the entire GPX file, we may decide to forget 100 points but have 4,000 left. This is far too many for Google to plot. We therefore make our small number a bit bigger and try again, this time dropping more points. We repeat this cycle until we have less than 200 points and then use those points to plot in our track.

This algorithm has been implemented with both a server-side Ruby backend and JavaScript client parsing.

Here is the Ruby script to place server side, if that's the way you want to plot your GPX files. We recommend using Apache and mod_ruby to run it, and much documentation is available for both.

uploaded successfully as far as we can tell

Once that script is in a suitable location, you need an HTML page with a little JavaScript to hook it up to.

We start with the most basic Google Maps instance, modified to support VML and Internet Explorer.

The Ruby code described above expects to receive a GPX file from an HTML multipart form. That form should look something like this:

You can see that this form is being submitted to a frame called sekrit. That's pretty straightforward to add to the HTML too:

And once those items are in your HTML file, all that remains is to add the following JavaScript after the addMap( ) function.

tag but can contain other html var html = "

Instead of parsing the GPX on the server side, and returning some JavaScript to an iframe, which calls functions in its parent, we can actually use JavaScript to do the whole jobfetch the GPX file and parse it, too. The one problem with this approach is that JavaScript is only allowed to access files hosted on the same domain as the web page it runs in. To get around this, we implemented a PHP proxy that bounces remote GPX files off our server to let JavaScript have it's way with them.

To see this in action, add the following to the JavaScript after the gpxtrack( ) function above.

You can remove the iframe since we're using XMLHttpRequest this time, and change the HTML form to the following:

Type the (valid) URL of a (valid) GPX file here:

The PHP proxy we used in proxy.php looked like this:

There are a lot more things you can do with this. A few of the most obvious include: