Hack 41. How Google Maps Got Me Out of a Traffic Ticket

The democratization of research is demonstrated, and Google Maps serves the cause of justice by answering a basic, but disputed, factual question.

In January of this year, I was pulled over by a traffic officer for "disobeying a steady red," a.k.a. running a red light. I pleaded not guilty to the charge, and, nearly six months later, I went to court to find out the fate of my ticket violation. In the end, it was nearly down to my word against the officer's but Google Maps saved the day!

There I was, on a bench waiting for my name to be called at the downtown Manhattan DMV hearings bureau. After hearing several testimonies from other drivers I knew this judge wasn't going to be sympathetic to my troubles. She heard driver after driver, but only one had a happy ending (from the driver's point of view).

So I was worried, because being found guilty would mean a $150 fine, plus $50 in penalties, andworst of allpoints on my license. I began to contemplate how it all happened since it had been so long. I jotted down some notes on a small piece of paper, and then came the moment of truth.

After my name was called, I gathered my belongings and made my way up to the stand where the ticketing officer joined me. The judge swore her in and asked for her testimony. The officer did just what I expectedafter all, I had been listening to those prior testimoniesand began to describe the scene of the violation. In her story, I noticed one fatal flaw, which I wanted to exploitbut I had no proof whatsoever. The officer stated that the street I was on was a one-way westbound street, and that I was turning onto an avenue that was a two-way street separated by a concrete divider. The flaw was that I had actually been on a two-way street, not a one-way.

At last, the time came for my testimony, and I stated that I had been in midturn, when an oncoming vehicle came toward me very quickly, and I had decided not to make the turn until that SUV passed me. The Judge stopped and asked me how there could be an oncoming vehicle if the street was only one-way. I stated that it was actually a two-way street. The officer reiterated that it was a one-way. Who was the judge to believe? I was desperate for proof, so I did the obvious: I whipped out my notebook computer. I was very lucky to find an extremely bad connection via Wi-Fi. I pulled up Firefox and went to maps.google.com. I typed up the intersection and zoomed in as close as possible, as shown in Figure 4-29.

As you can see, Cathedral Parkway (a.k.a. 110th Street) has no arrow indicating the traffic directions. However, 109th and 111th do. I explained to the judge that this means that 110th is a two-way street. The traffic officer begged to differ. She said perhaps an arrow was simply missing from the equation. So I called her bluff and showed the judge another intersection the one at Times Square, as shown in Figure 4-30.

Figure 4-29. Does an absence of arrows mean that Cathedral Parkway is two-way? 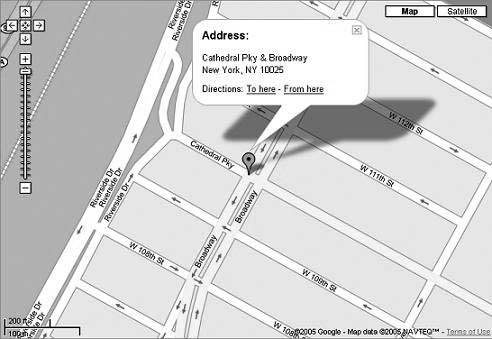 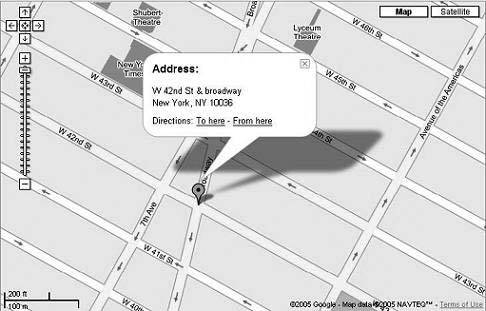 I asked Her Honor if she was familiar with 42nd Street. She nodded, and I continued by observing how all the neighboring streets have arrows to show the direction of traffic, with one exception: 42nd Street, which is wellknown to be a two-way street. The judge replied that, due to the officer's poor memory, the violation would have to be dismissed.

Thank you, Google Maps: you rule!