Hack 4. Get the Birds-Eye View

Maps are good, but a picture is worth…

Maps show what the mapmaker chooses to show. Google Maps, like most of the online map services, shows maps that are designed primarily for getting around in a car. In America, we pretend we've (d)evolved into homo automobilious, but despite our best efforts there is more to the world than scenery and billboards flying past the bug-smeared windshield.

One neat feature of Google Maps is the ability to flip between viewing a map and viewing satellite imagery. In Figure 1-8 we see a map of the Upper West Side of Manhattan, with an odd little shape sticking into the Hudson River on the left side. By clicking on the Satellite link on the upper-right side of the window, you get satellite and aerial imagery. 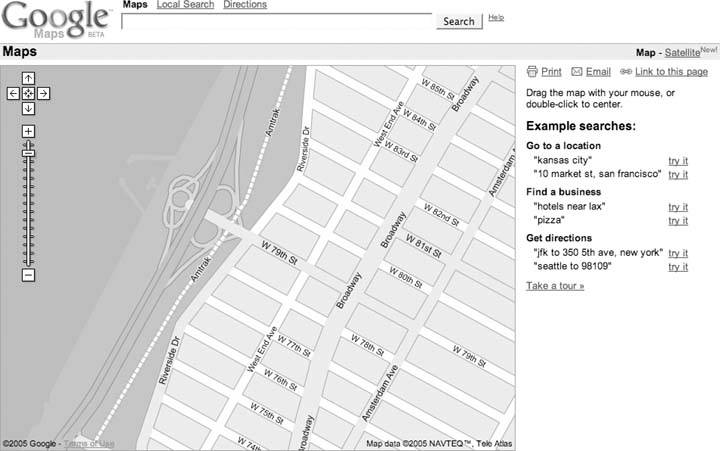 The aerial view in Figure 1-9 provides a lot more context! You can see the buildings and Riverside Drive. You can even make out individual boats at the 79th Street Boat Basin. You can use the same navigation tricks to pan around in satellite and aerial imagery as you can on the map layer [Hack #3].

Figure 1-9. Aerial view of the Upper West Side and the 79th Street Boat Basin 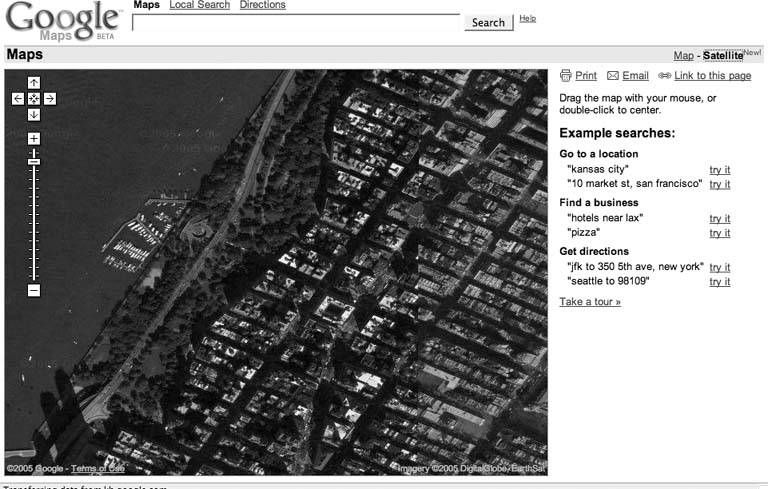 The satellite imagery's level of detail varies by where you're looking; some places have much more detail than others.

You can use the aerial imagery as a sanity check. For example, let's say you are in the North Bay area and are interested in dairy products. You could search for cheese near Petaluma, CA and get a map like Figure 1-10.

Figure 1-10. Looking for cheese in all the wrong places 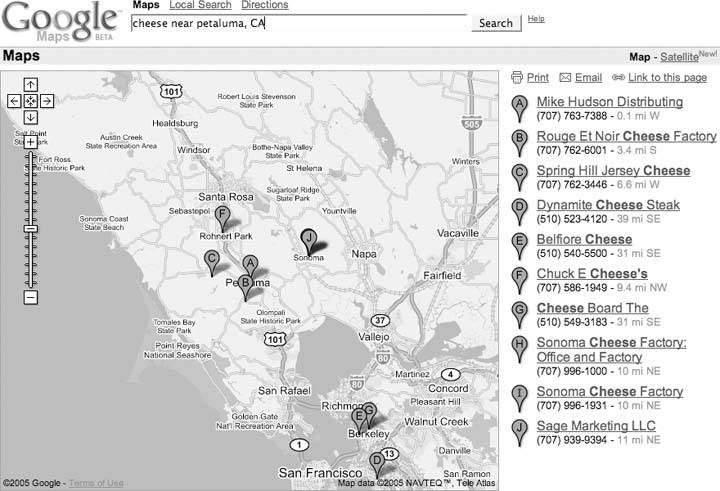 To visit Rouge et Noir Cheese Factory (http://www.marinfrenchcheese.com/), you could click on the link on the right side in the list of results, zoom in a bit, and flip to satellite view to get the view in Figure 1-11.

Where's the cheese? It doesn't look like it is there. Could it be in that circular compound on the right-hand side? Maybe, except I happen to know that this isn't the case. It seems that there's a disconnect between databases at Google. The business listing for Rouge et Noir puts it at 7500 Red Hill Road, Petaluma, CA 94952, but the map pointer is 4.5 miles northeast. Of course, this is beta software!

Entering the address, rather than the business name, into the search box rewrites the address as 7500 Point ReyesPetaluma Rd and comes closer to locating the Cheese Factory, as shown in Figure 1-12. The pointer is still a bit off, but that can be attributed to the difficulty in geocoding locations from street addresses on roads with long patches between intersections. 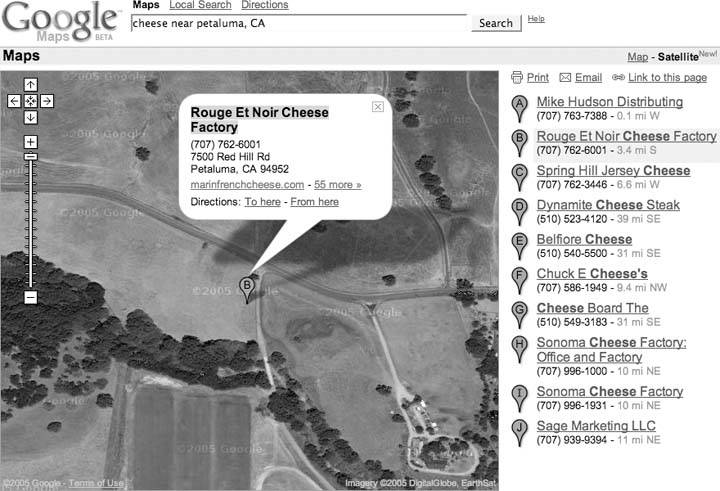 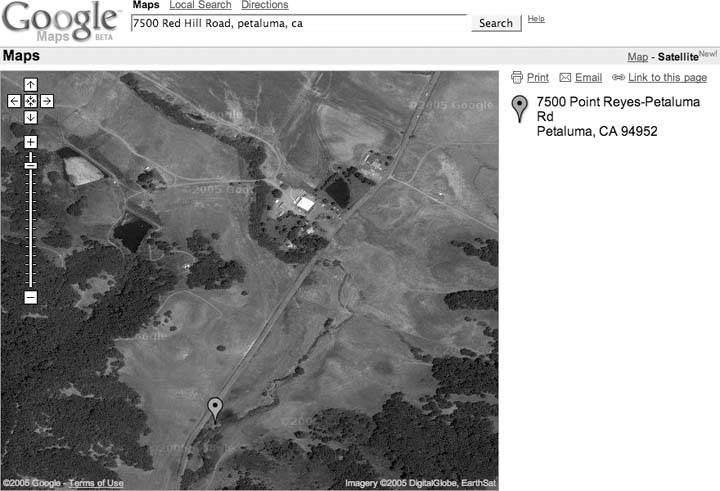 Now, as if that weren't enough, Google has added a Hybrid mode to Google Maps. The Hybrid mode takes a version of the original street map tiles with transparent backgrounds, and then lays them over the satellite tiles. The result is pretty fantastic, as you can see from Figure 1-13, making it much easier to identify what's being shown in the satellite image. 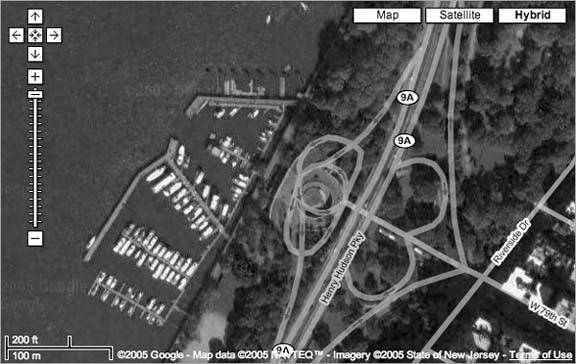 The ability to flip between maps and satellite imagery is amazingly cool, and is just a hint of what (I assume) is coming. There is plenty of room next to the Map, Satellite, and Hybrid hyperlinks for other views or, as we say in Geographic Information Systems, other data layers. One prominent example was the Katrina button that showed up in the map display of the Gulf Coast of the United States in the aftermath of Hurricane Katrina in August 2005. Clicking this button displayed up-to-date satellite imagery, allowing you to compare before-and-after views of the hurricane's tragically destructive wake.

What could Google add? How about a link to terrain or elevation data? Or a current weather overlay? Thanks, Google, may I have another?