Adding custom markers to your Google Map can enhance its readability and appeal.

Almost immediately after the Google Maps API announcement, Jeff Warren made a hack that used custom icons to do a map depicting Star Wars ATATs attacking Google's home town, Palo Alto, as shown in Figure 2-10. You can launch your own Imperial assault on Google's home base at http://www.vestaldesign.com/maps/starwars.html.

This hack immediately demonstrated the flexibility of Google's new API. If you wanted to use a house icon instead of the generic marker, you could. Likewise, if you wanted to make a multiplayer game using Google Maps, the API was flexible enough to allow you to let users submit their own icons.

To create an icon, you need two things: a foreground image for the icon and a shadow image in the PNG 24-bit file format. If you are only changing the color of the generic marker, you can reuse the generic shadow, but for this hack we're going to make something completely different.

Instead of doing something generic and boring, I decided to take a headshot of a friend of mine and turn it into a Google Maps marker icon! I grabbed a suitable shot from a digital photo, loaded it into Adobe Photoshop, and started erasing, as shown in Figure 2-11. About halfway through, I could tell this was going to make a great foreground image.

Figure 2-10. You too can send Imperial ATATs to attack Google's headquarters 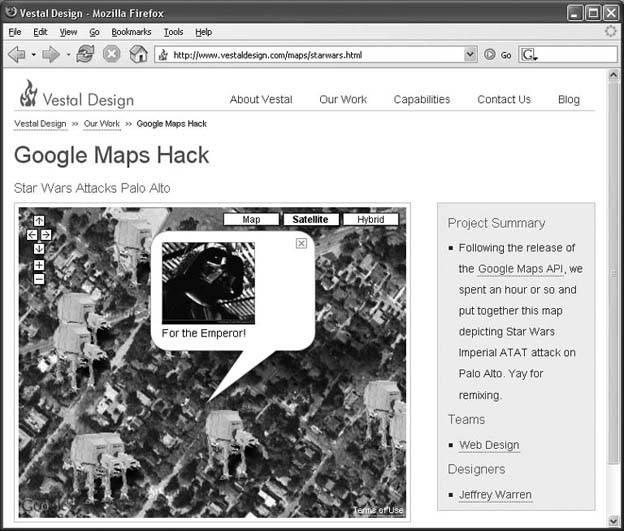 Once I finished erasing around Karl's head, I scaled down the image, cropped it, and expanded the canvas to give Karl's head some breathing room. I wouldn't want him to get claustrophobic, and when we start working on the shadow, we're going to need a bit of extra room. You can see the finished result in Figure 2-12.

Finally, I went to the File

Save for Web option, and saved my file in the PNG-24 format with transparency. 24-bit PNG format is ideal for custom map icons, because its lossless and the alpha layer support allows for some wonderful transparency effects.

Now that you have the foreground image saved, you might want to show it on your map right awaybut don't run ahead yet. We're going to want to reuse our work to create a shadow image. This is an image that gets placed behind the foreground image to give it that 3D effect, like it's sitting on top of the surface of your map. Using a shadow is optional, but it gives your custom markers more depth and character. This step is a little more complicated, but definitely worth your time.

Figure 2-11. Erasing around the head to create the foreground image 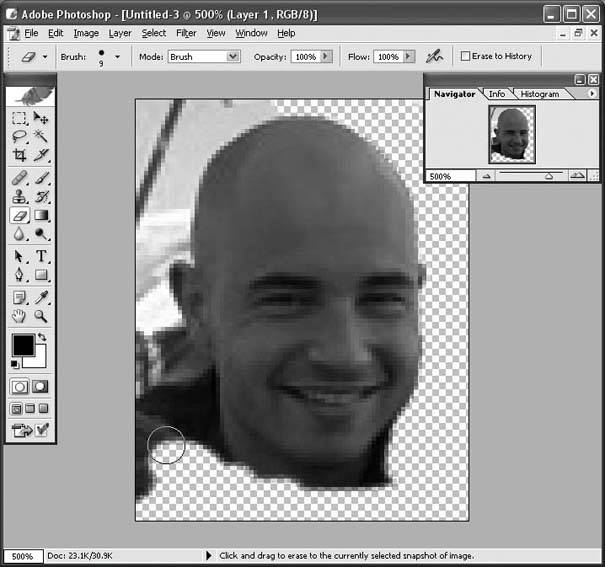