If you wanted to make your own Google Maps server, how much hard drive space would you need?

Google Maps renders maps by stitching small images together. We seek to discover the storage capacity of such an image repository. By capturing and examining screenshots of Google Maps in action, we can estimate the map scale at each zoom level, which will give us an idea of how much space is necessary to store all the tiles for that zoom level. Finally, we can add the storage requirements for each zoom level and apply some simple rules of thumb to arrive at an idea of how much hard drive space is necessary to support a web mapping service such as Google Maps.

First, we need to discover the scaling factors used at each of the fifteen zoom steps. To accomplish this analysis, we use a tool called Art Director's Toolkit, which comes bundled with Mac OS X and which offers an overlay desktop ruler image for measuring pixel distances onscreen. In zoom levels 0 to 6, we measure the pixel length between the northeast corner of Colorado and the southeast corner of Wyoming. This distance is clearly marked on the map as a horizontal line, which makes measuring it easy. Figure 2-16 depicts zoom levels 0, 1, and 2, where the distances in question are 12, 24, and 48 pixels, respectively.

In zoom levels 8 through 14, we measure the pixel length of the path from the intersection of Trenton Street and East 16th Avenue to the intersection of Verbena Street and East 16th Avenue in Denver, Colorado, which is within the metropolitan area closest to our previous locations. For zoom level 8, the distance is 9 pixels. For zoom levels 9, 10, and 11, the distances are 19, 37, and 74 pixels. The results are shown in Figure 2-18.

Now we can take the information from these measurements, and attempt to establish the numeric scale ratio between one zoom level and the previous one. Figure 2-20 presents the same relationships in three nicely formatted line graphs and Table 2-1 summarizes the data we collected.

Figure 2-20. Length ratios visualized in a series of line graphs 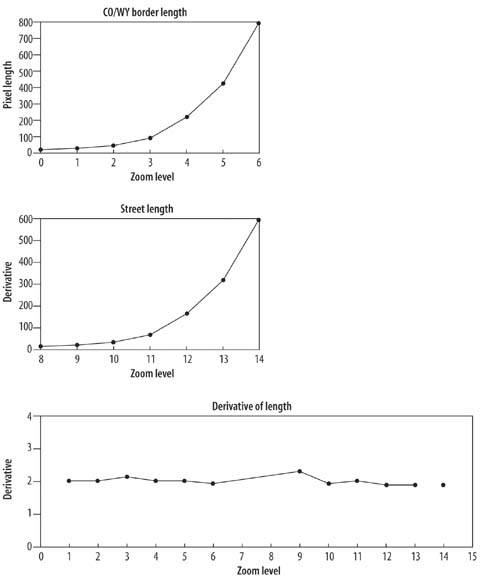 The conclusion we draw is that we can be fairly certain that the scale doubles with every increment of the zoom bar.

By zooming almost all the way out in Google Maps, we see that North America fits nicely in a 600 x 800pixel rectangular region, amounting to 480,000 pixels. Armed with this approximation, we proceed to estimate the pixel-area of this body at each zoom level. Table 2-2 depicts these relationships.

The color histogram of the maps in Figure 2-19 shows that about 60 percent of it is water. Assuming that Google observes such statistics, we guess that a single tile is used for all water regions. There are also lots of regions (such as tundra, deserts, and forests) where uniformly colored tiles can be used. Computing this accurately is difficult, but we will say it amounts to 10 percentof the data. So, only 30 to 40 percent of the tiles have unique data on them. This reduces the amount of data to 50 to 70 trillion raw data pixels stored in 750 million to 1 billion image files. Assuming a modest 1 byte per 6 pixels compression ratio (for LZW-encoded GIF format images), the storage required might be 50 to 70 trillion pixels * (1 byte/6 pixels) = 8 to 11 terabytes. If we consider that Google supports three map types at present (Map, Satellite, and Hybrid), this suggests that 24 to 33 terabytes are needed to store all the image data.

Since we did our original analysis, Google Maps UK, Google Maps Japan, and Google Earth were introduced, providing further evidence of a lofty goal to create a world atlas. So this puny analysis (as compared to the world's topology and architectural landmark data necessary for Google Earth), makes an attempt at covering the whole earth with tiles. To do this, we must learn more about the world. The CIA World Factbook provides just what we need.

We concluded from our analysis that covering North America requires somewhere between 750,000 and 1 billion distinct tiles to be fully described. Now we know that this is only 13.6% of the tiles necessary to describe the world's land tiles. So, anywhere from 5.5 to 7 billion distinct tiles ought to cover the world's surface area. Assuming the compression ratio described above, the world's tiles amount to 61 to 81 terabytes just for the rendered vector maps, and 182 to 243 terabytes for all three map types. That's a lot of databut then storing and retrieving huge amounts of data is Google's stock in trade!

In some ways, it seems a bit comical to attempt such a calculation where every step of the way requires an approximation. That's why in the end we have such a wide chasm of error. And, of course, this rough analysis does not cover area distortion introduced by mapping the globe's points onto a two dimensional surface. However, even with this rough estimate, we think we've managed to get a decent sense of just what it takes to map the entire world in the style that Google Maps has pioneered.