Hack 43. Dont Believe Everything You Read on a Map

Hack 43 Don t Believe Everything You Read on a Map

Learn how the selection of imagery can be extremely subjective.

It is easy to assume that maps are somehow true and objective representations of a place. After all, most of our interactions with maps have to do with practical affairs such as navigating the complex layout of a city. The truth, however, is that maps both reflect and create reality. This is most clear in the choices of what is, and is not, put on a map.

For example, chamber of commerce maps typically show lots of green for parks and greenbelts, but somehow neglect to point out the less desirable aspects of a community. Okay, you might say, the maps are subjective, but I can count on the aerial imagery, right? It is just a record of how things were. Alas, even there we have issues. There is a huge possibility for bias in the choices of images that will be displayed.

Figure 5-4 shows part of the Black Rock desert in Nevada, near the town of Gerlach. For most of the year this is an empty expanse where you can either hear yourself think or hear the people cruising about trying to set land-speed records in the armed-and-inebriated SUV-driving category. However, for a week, plus time before and after for set up and clean up, this is Black Rock City, home to the Burning Man festival. This particular image was taken during the setup period for the 2003 event.

Figure 5-4. A bit of desert in Nevada, late summer 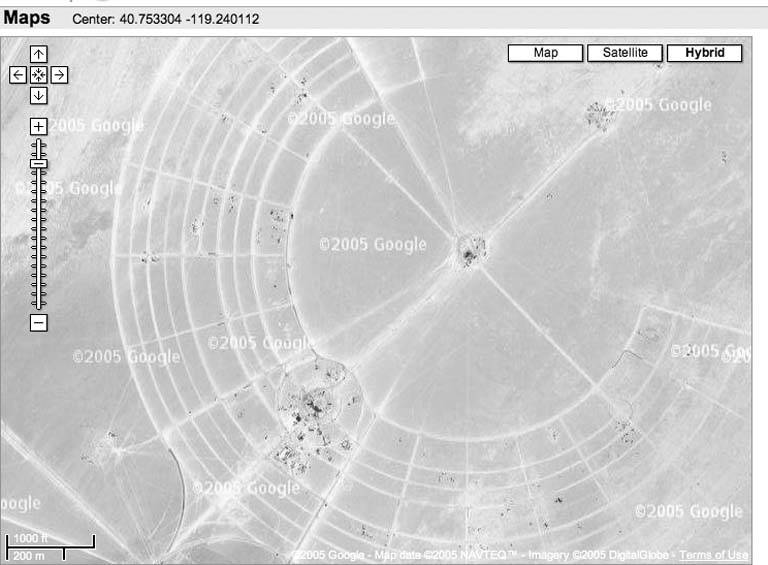 The simplest explanation is that maps tell stories, and so these particular mapmakers configured reality through selection of imagery in order to tell a more entertaining story. After all, according to Muriel Rukeyser, "the universe is made up of stories, not atoms."

Some of the stories have a chilling message. Take a look at the imagery around 1600 Pennsylvania Avenue, Washington, D.C. You can count the trees on the White House grounds, but roofs are all obscured, as seen in Figure 5-7.

The White House suffers little in comparison to the Capitol. Clearly there is a large blobby thing at that end of the National Mall, but it isn't clear what it is. Congress is apparently more protective of its foliage than is the Executive Branch, as we can see in Figure 5-8. 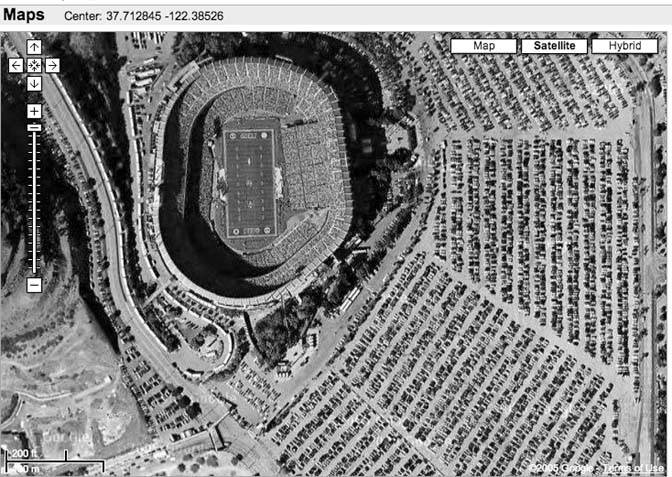 Figure 5-6. The home of the Raider Nation in Oakland 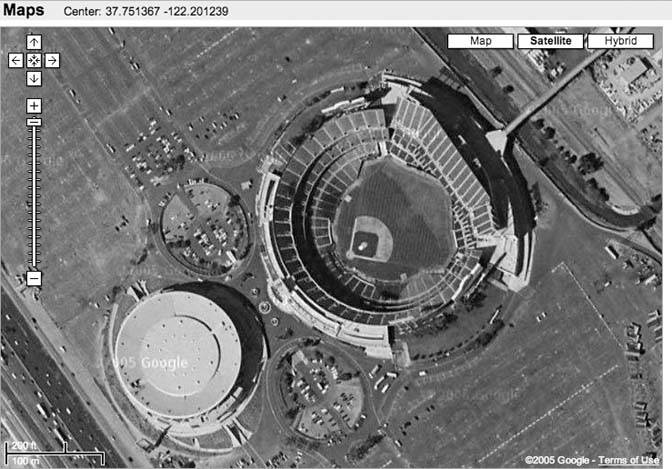 Figure 5-7. You can plan an Easter egg hunt, but don't plan to find any on the roof 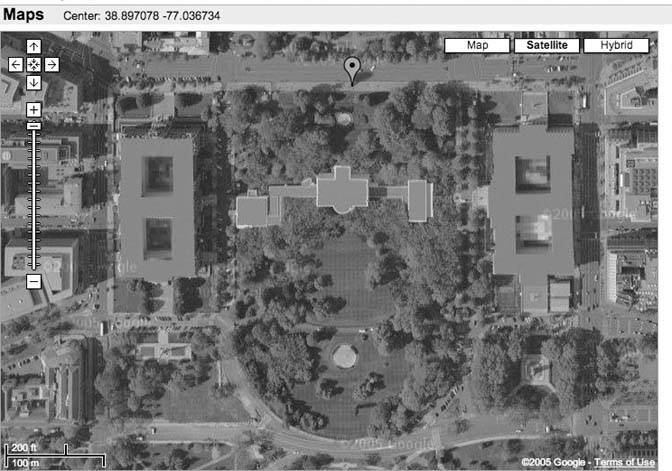 Figure 5-8. Congress shall make no law, assuming you can find it 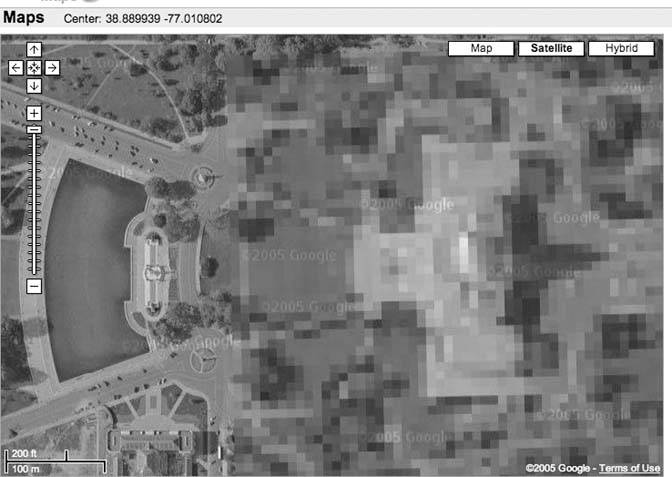 The Pentagon, as shown in Figure 5-9, appears to be the least protective of rooftop assets.

Figure 5-9. For once, the Pentagon appears to have nothing to hide 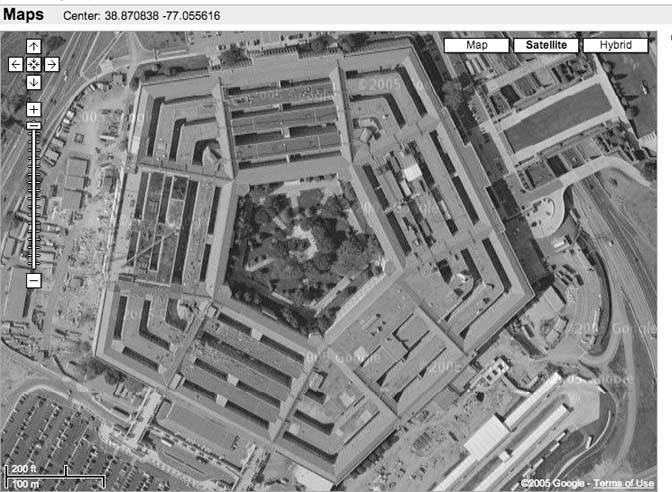 In some parts of the country, cornfield artists have expressed their support for the military. There are no obscured roofs in Figure 5-10, and I bet folks in uniform feel welcome in Bellevue, Nebraska. (At least, the ones who fly do!)

I'm tempted to make a comment about real national security versus "security theater," but there are so many strange things happening in the world that I don't understand that I'd best remain silent. At a recent conference, I was introduced to the phrase kill chain, as in "you can ignore him, he's not in the kill chain." Since I can't even figure out which Linux desktop is best, I have no chance at an intelligent opinion about national security or the kill chain.

Perhaps I'm better equipped for an appreciation of the two images of 1 Infinite Loop, Cupertino, CA 95014. The first, Figure 5-11, is taken from Google's satellite imagery, and the second, Figure 5-12, from Microsoft's Virtual Earth.

Was Apple bombed to rubble recently? Obviously, as of this writing, Microsoft's Digital Earth is using very old imagery of a small slice of Cupertino. This appears odd, since the imagery for other parts of the Bay Area seems much more current. It's almost as if…Microsoft…wants us to believe…that Apple…simply isn't there….No, in the end, fretting over conspiracy theories about how places are portrayed is unsatisfying.

Figure 5-10. "We honor those who serve America" 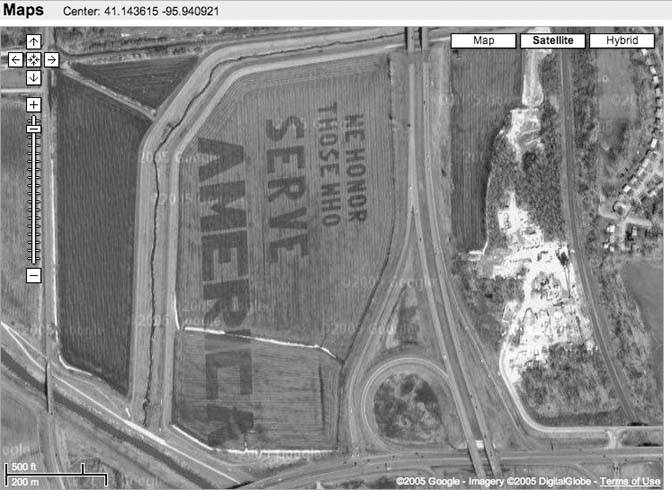 Figure 5-11. What Google thinks of this particular Infinite Loop 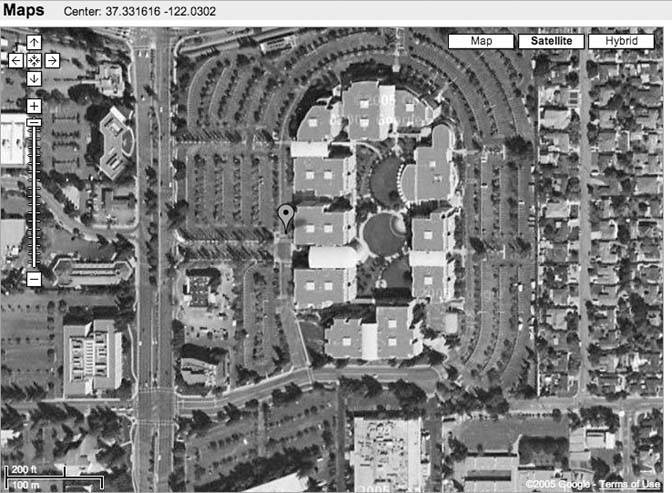 Figure 5-12. Apple appears to have disappeared 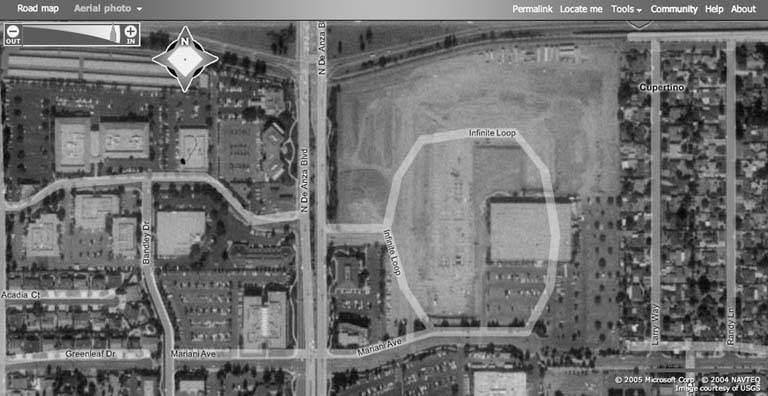 That doesn't make it necessarily wrong, however. After all, we live in a world where a telephone company with broadband business will intentionally block traffic to telecomm workers' union web sites during a strike. Perhaps it is enough to recognize the lesson that reality is a commodity, like any other, and that access to reality is sometimes mediated through more steps than might always be totally healthy for a free and democratic society.