The XMaps library is a set of extensions to the Google Maps API. As of this writing, the library builds on the Google Maps API to add many capabilities that the API itself does not provide. As of this writing, the additional features provided by XMaps include filled polygons, text along polylines, and custom icons and markers. For this hack, we will see how to easily create new icons by making use of the XIcon and XMarker classes from XMaps. The XMaps library lives on the Web at http://xmaps.busmonster.com/.

The XIcon class is similar to Google's GIcon class, but it automates some of the steps necessary to create icons, making it simpler to make new icons on the fly. You could do the same thing that the XIcon class does by using a server-side script, but here we are using something that does not require any extra server horsepower or bandwidth from you. XIcon objects are limited in that they are a filled concave polygon (e.g., the outline of a car, lion, or circle), but you have the advantage of being able to specify the color, size, opacity, and any text on it on the fly.

The GIcon class makes use of a set of pre-rendered PNG images stored on a server somewhere. The default GIcon uses three images from Google Ride Finder to create its resulting image: the reddish-orange marker image, a nearly transparent version of that same image (for click detection on IE), and a mostly transparent shadow image. Figure 7-3 shows the parts of this pre-rendered icon.

Figure 7-3. Google Maps pushpin icon parts: (a) the pushpin image, (b) the shadow, (c) the click target for IE, and (d) the resulting icon

Instead of using pre-rendered images, an XIcon's images are created on the fly by using the existing (but unofficial) service that Google Maps already uses to draw polylines. Using this service, we can actually draw images of any color and opacity. By specifying the outline of the icon shape, the XIcon class can create the necessary images for you (including the shadow image). For example, if we wanted to create a rounded box icon, we could come up with a list of points for the outline, give them to XIcon, and get the set of images shown in Figure 7-4 for the icon.

Because we are creating an additional image in the set of images used for the icon, we cannot use the existing GMarker class in the Google Maps API, which can only use the images in a GIcon. Instead, we use the XMarker class, which can handle either GIcon or XIcon objects. XMarker gives us an additional ability that GMarker does not provide, namely the ability to place text or other HTML on top of the icon. When we create our icon, we will specify the bounds of any content that might be displayed on top of the icon, and an XMarker will use these bounds to place text or a generic HTML DOM element on top of the icon.

Suppose, for example, that we wanted to create a web site all about the Bermuda Triangle. What better icon to use for our map than a custom-made triangle pointing at our map! I'll assume you are familiar with the general layout of a Google Maps page. The fragments of code here require that there is an existing GMap object already created and assigned to a JavaScript variable called map.

The first thing we'll have to do is include the XMaps library along with the Google Maps API JavaScript files. Here's the code that should appear at the beginning of our page. Note that you will want to replace the API key with one for your site, and you will want to make sure you are using the most recent version of the XMaps library from http://xmaps.busmonster.com/.

Next, let's define the icon's shape. Here I've specified a triangle approximately 30 pixels to a side.

As you'll see, we can scale this later, so the initial size does not matter too much. The shape description is contained in a simple associative array, with the following properties:

This is the pixel of the icon's image, which should be tied to the point on the map. In this case, it is the bottom middle pixel (the triangle's bottom point).

This is the pixel on the icon's image, which should be tied to the bottom point of the info window.

This determines if the icon will have a shadow or not (the shadow is created for us automatically).

This is the top left pixel on the icon's image that should be used for any HTML content on top of the icon (e.g., text).

This is the size, in pixels, of the box in which HTML content is allowed.

This is an array of x/y pairs that define the shape of the icon. In this case, we have the corners of an upside-down triangle.

You can see the purpose of some of these properties in Figure 7-5.

Now we are ready to give our shape a name. We do this so that XMaps can cache the URLs that are used to generate these shapes for better performance.

Our shape is now registered with the Xmaps API, and we are ready to use it. When we create an XIcon, we have a number of style properties we can specify. Each of these has defaults, so you will not always have to specify all of them, but I will do so here to show you an example of each property: 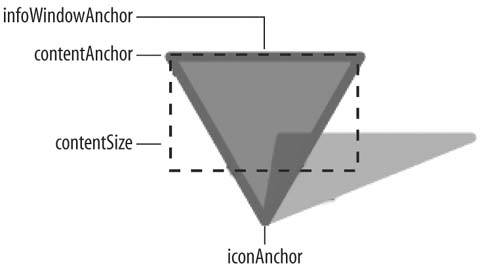 Once again, the icon's style is defined with a simple associative array. Here's what each property does:

Specifies the color for the outline of the icon. Here, we are using a white outline.

Specifies the width, in pixels, of the icon's outline.

Specifies the opacity of the interior of the icon; must be in the range 0 to 1.

We are ready to create our icon. The call to the constructor looks like this:

Now we have an icon we can use with any XMarker. Here, we'll plot one:

The XMarker constructor takes a point and a few optional arguments. We pass the icon we created as well as some text to be displayed on the icon and when the mouse hovers over the icon. The XMaps API allows us to pass the XMarker object directly to map.addOverlay( ), just as if it were an ordinary GMarker.

And we're done! With a minimum of effort, we have a new marker with a custom icon that has its own shadow, is scaled and colored like we want, and has the clickable region specified by the icon outline. To see the results, browse over to http://xmaps.busmonster.com/triangle.html and check it out.

We can follow these same steps to create lots of reusable icons. To give you a head start, XMaps comes with a few handy premade icons, including the rounded box you saw in Figure 7-4. You can play around with the web pages listed below to see more examples of custom icons with XMaps.