Hack 30. Stay Out of Traffic Jams

A few Google Maps mashups to keep you and your car out of trouble.

According to statistics published by the BBC in 2002, there are nearly half a million traffic jams in Britain every yearor more than 10,000 a weekand those numbers were on the rise. A quarter of Britain's main roads are jammed every day, and nearly 1 in 4 residents of the U.K, have to contend with heavy automobile traffic daily. In our car-obsessed United States, automobile commuters spent an average of 47 hours delayed by traffic congestion in 2003 alone, according to estimates published by the Texas Transportation Institute. In the ten largest metro areas in the States, that figure goes up to an average of 61 hours a year. That's two and a half whole days out of every year, spent by the average driver, just sitting in the car, idling in bumper-to-bumper gridlock!

Fortunately, the hackability of Google Maps offers hardy urban dwellers superior access to timely information in this fast-paced era! Almost as soon as Google's flashy road maps hit the Web, hackers went to work plotting out the miasma of traffic congestion that plagues the lives of so many in the urbanized western world.

4.3.1. Avoiding Gridlock in the United States

The best Googlified traffic maps of the States come from the Google-Traffic. com Traffic-Weather Maps site at http://supergreg.hopto.org/google-traffic.com/. Using RSS from the Traffic.com web site, "Super" Greg Sadetsky has assembled an informative service that reports the locations of traffic conditions in major U.S. cities. From the front page, you can select your city of interest, and click the Go! button to be taken directly to the map. Figure 4-3 shows the current traffic conditions in Philadelphia. 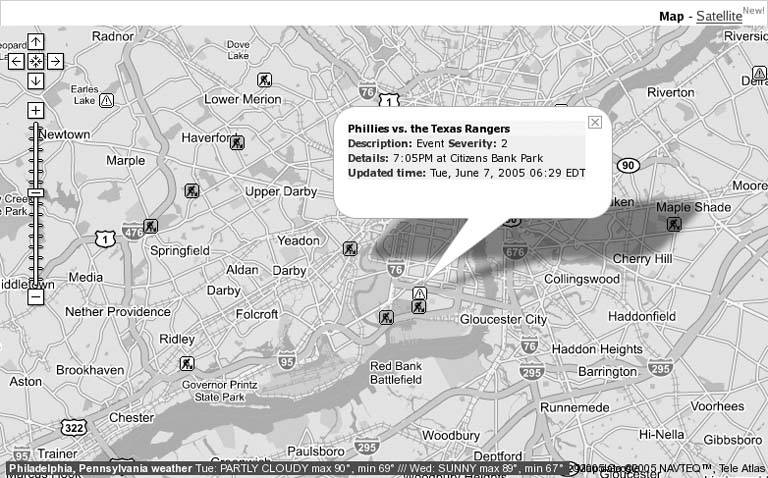 Custom icons show the type of delayeither construction or some kind of incidentand the color of the icon indicates the severity of the delay, from yellow to red. Clicking on any of the icons loads a callout that displays the details of the traffic delay. Miraculously, the Schuylkill Expressway (I-76) is clear this morningbut it's early yet, only about 6:30 A.M.while the Broad Street exit of I-95 should plainly be avoided, especially later this evening when baseball fans will flock to Veterans Stadium to watch the home team lose to the Rangers.

You can link to these maps, bookmark them, or embed them on your own page in an HTML iframe, using the following URL format, substituting your city of interest for "Philadelphia,+PA":

Traffic details for 23 major cities are offered on the site, including Atlanta, Baltimore, Boston, Chicago, Dallas, Detroit, Houston, Los Angeles, Miami, Minneapolis, New York, Orlando, Philadelphia, Phoenix, Pittsburgh, Providence, Sacramento, San Diego, San Francisco, Seattle, St. Louis, Tampa, and Washington, D.C. As a bonus, weather information for the selected city is also pulled from an RSS feed and is embedded in a small horizontal bar at the bottom edge of the map. If you don't care for this feature, you can turn it off by adding &weather=0 to the URL for your city.

4.3.2. Avoiding Gridlock in the United Kingdom

The opening of the BBC Backstage service, which offers access to RSS feeds of many different kinds of information from the BBC, was almost perfectly timed with the initial release of Google Maps UK. It didn't take long at all for several hackers to leap to the challenge of plotting the BBC's traffic feeds on Google's new road maps of Britain. One solid example is Andrew Newdigate's TrafficMeister at http://gtraffic.datatribe.net/, which offers the by-now-familiar Google Maps view of the entire UK, with custom, clickable icons indicating the type of delay. Figure 4-4 shows an example of roadwork near Southampton.

Another interesting take on the same idea can be found on Alistair Rutherford's gTraffic site at http://www.gtraffic.info/, which uses colored icons to indicate the severity of the delay. Additionally, the gTraffic site displays the latest alerts in chronological order down the right side of the page. Figure 4-5 shows the same roadwork delay near Southampton on gTraffic.info.

Potentially even more useful to residents of the United Kingdom, where petrol is more expensive and private automobiles not quite the institution they are in the States, is the drop-down box at the top of the page that offers a Transport option. Figure 4-6 illustrates the increasingly dismal state of British rail in the modern era of transport privatization.

Figure 4-4. A TrafficMeister map of the southeastern UK 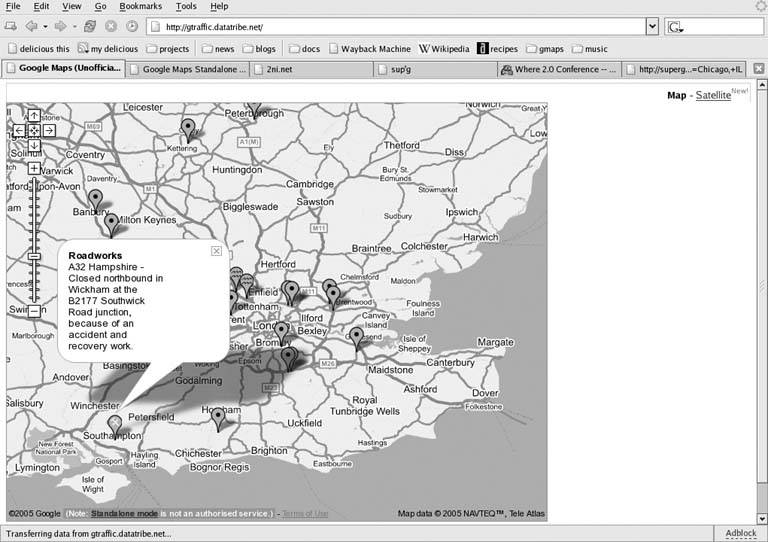 Figure 4-5. A gTraffic.info map of the southeastern UK 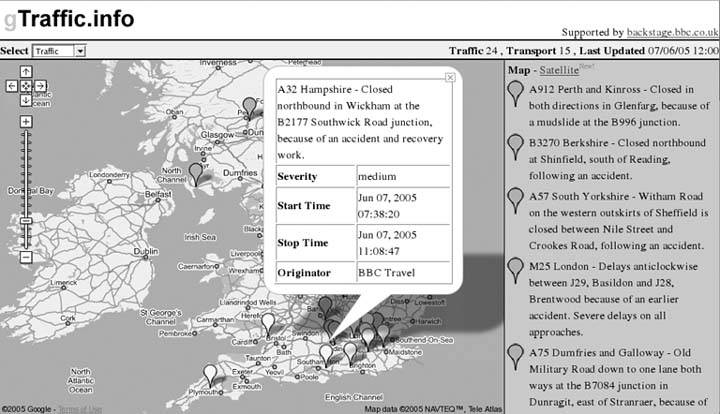 A similar take on this sad state of affairs can be found on Duncan Barclay's site at http://backstage.min-data.co.uk/travel/, where you can also view either road or rail delays. Figure 4-7 shows the same delayed train service, this time on the min-data.co.uk site. Interestingly, on this map, the marker has been placed at Watford Junction, where the train departed from, rather than Brighton, where its arrival has been delayed. 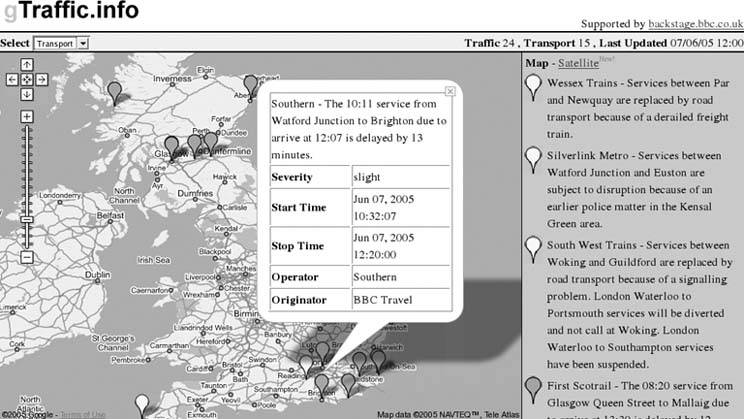 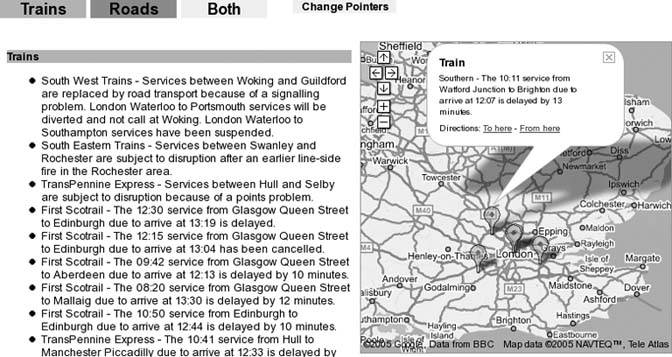 The eagle-eyed reader will probably have already discovered this, but at least a couple of sites have gone as far as remixing Google Maps with the BBC's webcams of traffic hotspots in surveillance-happy London. gTraffic.info has a CCTV option in the drop-down on the upper left; Figure 4-8 shows the situation this morning outside St. James's Park, along Piccadilly. 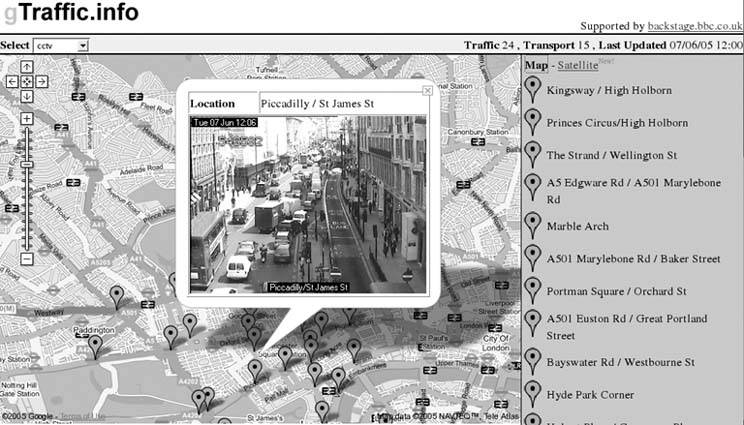 The amazing gmaptrack site offers a similar view at http://www.gmaptrack.com/map/locations/24/44, where you can also click a link to see the image at its source on the BBC London Jam Cams web site. On either site, you can click the links on the right to view the camera image in a callout over the map locationprobably best to take a bicycle this morning!

Several other web sites that offer this kind of experimental traffic map can be found on the BBC Backstage web site at http://backstage.bbc.co.uk/. Although web-based maps of traffic conditions are nothing new, the ease with which hackers have been able to remix RSS feeds of traffic reports with Google's stylish mapping interface is a testament to the possibilities inherent in open systems loosely joined by open protocols, even before Google published its Maps API!