The following two sections will discuss this two-step process.

Bandwidth policing places limits on the maximum rate for tunneled traffic; traffic that exceeds the configured rates is dropped by the concentrator. This policy type typically is used when you want to ensure that a particular L2L session or group of users (like those with broadband connections) don't hog all of the bandwidth on a particular interface on which their VPN session terminates.

To create a bandwidth policy, go to Configuration > Policy Management > Traffic Management > Bandwidth Polices. This screen lists your existing policies. To add a policy, click the Add button, taking you to the screen in Figure 10-1. 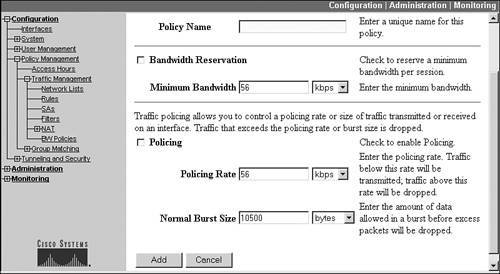 At the top of the screen you need to enter a name for your policy in the Policy Name text box. I typically use descriptive names. For example, if I'm creating a general bandwidth policy for tunneled traffic on the public interface, I would call the policy "General BW Public Policy" (or something like that). Likewise, if I were creating a bandwidth policy for an L2L session, I would use the L2L session name for the policy; if the L2L session was connecting my site to the Oviedo site, I would call the policy something like "Oviedo L2L BW policy." The actual policy name can be 32 characters in length.

Below this parameter are two sections for the two types of policies:

You'll notice that there is a check box to the left of each section name. This means you can configure bandwidth reservation and policing in the same policy or you could easily configure just one of the two, depending on the type of user or L2L traffic you are dealing with. The details of both are discussed in the following sections.

If your policy needs bandwidth reservation, click the check box to the left of Bandwidth Reservation. Below this is the Minimum Bandwidth parameter. This parameter allows you to specify a minimum amount of bandwidth available for each VPN session that uses the policy. For an L2L session, this policy would apply to all traffic traversing the associated tunnel. For a remote access group, this policy would apply to each individual user session associated with the group. As an example of using bandwidth reservation, if you set the minimum bandwidth value to 56 Kbps and this policy was applied to a remote access group, and 20 users from this group simultaneously accessed the concentrator, each user would be guaranteed 56 Kbps of bandwidth at a minimum, or 1,120 Kbps in total bandwidth. The default value for bandwidth reservation is 56 Kbps. You can specify a traffic rate from 8,000 bps up to 100 Mbps.

Take care when using bandwidth reservation. As you will see in the "Activating Bandwidth Policies" section, one of the things you specify for your concentrator's interface is its maximum supported link rate. For example, if your Internet connection was a T1, then even though your concentrator's public interface might support 100 Mbps, its true link rate really would be that of the external T1: 1,544 Kbps. Assume your default bandwidth reservation policy for the public interface was 56 Kbps. Given this policy, only 27 users would be able to connect to the concentrator given the guaranteed 56 Kbps of bandwidth reserved for each user and a total capacity of 1,544 Kbps. This is true even if the users are not using their reserved bandwidth! When the first user connects, she is reserved 56Kbps, but can use more bandwidth if needed. Once the second user connects, he also is reserved 56 Kbps. At this point, 112 Kbps of bandwidth is reserved for the two users, and the two users can use the remaining bandwidth of 1,432 Kbps (1,544 112). This process keeps occurring for each user who establishes a remote access connection. Once the 28th user attempts to establish a connection, the concentrator assumes that given a link capacity of 1,544, this additional user can't be supported because the concentrator already has reserved 1,544 kbps of bandwidth for the first 27 users. Therefore, I would use bandwidth reservation on a very limited basis, such as for an L2L session where you need to ensure that remote access users don't use up your available bandwidth and starve your L2L sessions.

Bandwidth policing is more suitable for remote access users when you want to limit the amount of bandwidth they can use. Any traffic sent above the policing rate automatically is dropped by the concentrator. When using bandwidth policing for remote access users, you are ensuring that one or more users don't use up bandwidth that might be required for certain L2L sessions or other remote access groups. If you're concerned that a group of users at least receives a minimal amount of bandwidth, but doesn't starve other VPN sessions, you can combine policing with reservation.

To create a bandwidth policing policy, click the check box to the left of Policing in Figure 10-1. Because data traffic is bursty in nature, policing involves the configuration of two parameters:

As an example, if you wanted to limit users to 128 Kbps of bandwidth, set the Policing Rate to 128 Kbps and the Normal Burst Size to 24 Kbps.

The following sections discuss how to associate a bandwidth policy to each of the above three items.

Per my explanation in the last section, you'll first need to create a general policy for the concentrator's interface for VPN traffic not associated with a specific bandwidth policy. Normally, this interface policy uses bandwidth policing, not reservation. Once you have created a policy for the interface, you'll need to enable bandwidth management and activate this general policy. Normally this is done on the concentrator's public interface, where most, if not all, of your VPN sessions are terminated. However, if you have a three-interface concentrator and are terminating sessions on the external and public interfaces and want to use bandwidth management on both, you'll need to create a general policy for both (if the policy requirements are different) and enable these on both interfaces. 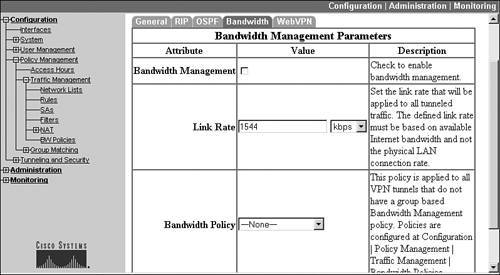 Below the Link Rate parameter is where you select the general bandwidth policy that should be applied to the interface. The Bandwidth Policy parameter is a drop-down selector that allows you to choose a policy for the interface. This policy is used for all VPN sessions terminated on this interface that are not associated with a specific bandwidth policy (one applied to a group or an L2L session). When you have finished selecting your policy, click the Apply button at the bottom to activate your bandwidth management changes.

One of the main concerns you'll have with remote access users, especially broadband users, is to ensure that their traffic doesn't consume the available bandwidth of the concentrator's effective bandwidth on its public interface. Remember that bandwidth management enforces policies in both directions on the interface, and most traffic is coming from the inside service or resource to the user. Therefore, most policies that you would create for remote access users would be bandwidth policing.

I already have discussed how to create bandwidth policies in the "Creating Bandwidth Policies" section. Once you have created a policy for a group of users, you can then apply it to the remote access group the users belong to. Do this by going to the Configuration > User Management > Groups screen. This was shown previously in Figure 7-2 in Chapter 7. To apply a bandwidth policy to a group, click the name of the group on this screen and then click the Bandwidth Assignment button (in version 3.6, this is the Assign Bandwidth Policies button).

You are taken to a screen where the concentrator's interfaces are listed as hyperlinks. Click the name of the interface where the remote access users for this group will terminate their VPN sessions (this is typically the public interface), which takes you to the screen shown in Figure 10-3. This screen allows you to choose the bandwidth policy that will be applied to this group. Choose the group's bandwidth policy with the Policy drop-down selectorthe drop-down selector lists the policies you have created previously. 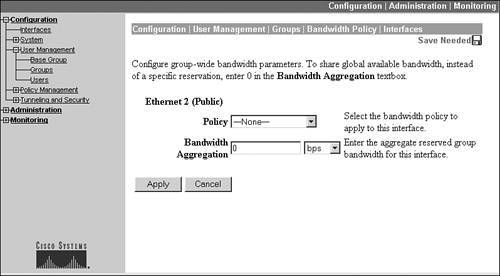 The second parameter you can configure on the screen in Figure 10-3 is Bandwidth Aggregation. I'll use an example that illustrates the usefulness of this parameter. Assume that you have a general bandwidth policy applied to the concentrator's public interface that has a reservation policy of 56 Kbps per VPN session and a reservation policy for a group, called Accounting, of 168 Kbps. The public interface has a link rate of 1,544 Kbps. A user establishes a VPN session to the concentrator and is associated with a group with no bandwidth management policy; therefore, the interface's policy is used and the user is reserved 56 Kbps, but has access to the remaining bandwidth on the interface (1,488 Kbps). Another user, from the Accounting group, then establishes a VPN connection to the concentrator and is reserved 168 Kbps of bandwidth. As more and more users of each type connect to the concentrator, they are reserved their assigned bandwidth until the concentrator reaches the rate limit of its interface; and then it drops any new connection attempts.

One of the problems in this scenario is that if enough users from groups other than Accounting connect to the concentrator, even a single user from the Accounting group might be rejected from connecting if the Accounting user's reserved rate value would cause the concentrator to exceed the rate limit of the interface. The function of the Bandwidth Aggregation parameter in Figure 10-3 is to reserve a specified amount of bandwidth for the group itself, ensuring that at least some users from the associated group can connect. Users using the general policy or from other groups cannot use this bandwidth; it's reserved for users of this group. For example, if the Bandwidth Aggregation parameter was set to 512 kbps for the Accounting group, at least three Accounting users would be guaranteed a connection to the concentrator, because this bandwidth would be reserved for the Accounting users. Then, in our example, users from any other group (including Accounting) would have access to the remaining 1,032 kbps of bandwidth.

Besides applying bandwidth policies to remote access groups, you can also apply them to L2L sessions. Once you have created your bandwidth policy for your L2L session, you can apply it by either going to the group screen or to the L2L screen. For the latter, go to the Configuration > Tunneling and Security > IPsec > LAN-to-LAN and click the Modify button. Then use the Bandwidth Policy drop-down selector to associate the policy to the L2L session.