Cisco VPN capabilities have their roots in Cisco IOS-based routers, where VPNs were first introduced in the Cisco router line. Cisco routers support many VPN solutions including IPsec, PPTP, L2TP, and WebVPN (in the newest IOS versions). Because of their flexibility, routers can be used in many different situations. This section will focus on how routers can be used with L2L and remote access VPNs in your network, including the router's special advantages over other Cisco VPN products. 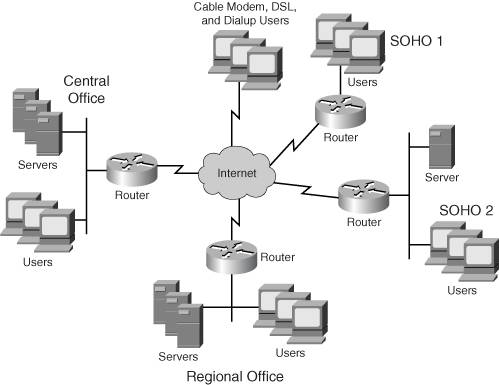 As I mentioned in Chapter 8, I prefer (and Cisco recommends) to use routers for L2L sessions. I'm constantly asked why routers are better for this role than the VPN 3000 concentrators and the PIX and ASA security appliances. There are four main features the Cisco IOS-based routing products have over Cisco 3000 concentrators and PIX/ASA security appliances when it comes to VPN implementations: data transport, routing scalability, media translation, and quality of service (QoS). The next four sections will discuss these features in more depth.

Two limitations of IPsec for VPNs are that IPsec doesn't support IP multicasting and it doesn't support non-IP protocols such as IPX or AppleTalk. With a VPN 3000 concentrator or PIX or ASA security appliance, there's nothing you can do about these problems; however, Cisco routers can easily get around these two problems by encapsulating multicast or non-IP protocols using a GRE tunnel, and have the GRE tunnel go across a unicast IPsec sessionin other words, a tunnel (GRE) within a tunnel (IPsec). Using this approach, you can send IP multicast and broadcast traffic, including routing protocol and non-IP protocols, across an IPsec tunnel. See Chapter 1, "Overview of VPNs," for more information on GRE.

When I need to interconnect a large number of large sites, where each site has many networks connected to it, routers perform this task better than the other two products. With Cisco routers, I can use a feature called Dynamic Multipoint VPNs (DMVPNs) which simplifies the interconnection/meshing process and the routing function of learning about the destinations at each end of the tunnel (with a minimal configuration).

One problem with VPN 3000 concentrators is that you either do this manually with network lists and RRI, or automatically, with Network Auto Discovery. The problem with the latter approach is that it only works with RIP, and it requires that the two endpoints be concentrators. Cisco routers, on the other hand, support many IP routing protocols, such as RIP, IGRP, OSPF, IS-IS, EIGRP, and BGP.

With PIX and ASA security appliances, routing protocols are not supported across VPN tunnels (at least not until version 7.0) and therefore the routing must be done manually, which doesn't scale well when connecting a large number of sites, with each site having a large number of networks. As an example, if you need to connect three sites together, where each site has 100 networks, on each site's PIX or ASA, you would need to configure 200 networks for the 100 networks at each remote site. As you add more sites and more networks, managing the routing process becomes unmanageable.

A third advantage of Cisco routers is that they support a wide variety of media types, such as Ethernet, ATM, ISDN, DSL, Frame Relay, point-to-point serial links, and many others. Cisco VPN 3000 concentrators and PIX and ASA security appliances support only Ethernet-based connections. Therefore, if you only need one Layer-3 device at a small site, it makes no sense to buy two products to handle multiple functions such as terminating VPNs and firewalling, in addition to connecting to an ISP with a non-Ethernet connection. Instead, you could use a router to handle all of these functions.

The fourth advantage that routers have over VPN 3000 concentrators and PIX and ASA security appliances is their support for sophisticated QoS features. For example, suppose you had implemented VoIP throughout your network in Figure 15-1. A Call Manager device is located at the Central Office and a hub-and-spoke design is used to interconnect the various users and sites (with the Central Office being the hub). Given this situation, you need to prioritize your VoIP traffic over your data traffic to ensure that phone communications receive the necessary bandwidth and minimal delay.

The problem of using a VPN 3000 concentrator for this process is that its bandwidth management features are applied to a VPN termination point, like a remote access user or an L2L session; it cannot prioritize the traffic that traverses the tunnel, like VoIP over data traffic. In 6.3 and earlier of the PIX operating system, there is no support for QoS (in Version 7, there is support for low-latency queuing (LLQ), which is used primarily for VoIP applications.

Cisco routers, when compared to the other Cisco VPN products, are feature-rich with QoS capabilities, and they do the following:

With the Cisco QoS features, you can classify your traffic manually or dynamically based on issues such as bandwidth, delay, jitter, and data loss requirements. The Cisco router QoS capabilities allow you to avoid congestion problems, or, in a worse case, at least deal with congestion problems so that they don't create additional problems for VoIP and mission-critical resources.

Cisco QoS features implement some or all of the following functions to handle your QoS needs:

WFQ is the default for WAN interfaces that are E1 or smaller. WRRQ is used, by default, on the egress interfaces of Catalyst Layer-3 switches. It uses a queuing policy similar to PQ, except that it guarantees that no queue will ever be starved. LLQ is ideal for networks that need to transport both voice and data. It combines PQ and CB-WFQ.

Of the two, WRED is the more sophisticated because it uses the markings in packets to determine what should be dropped, to avoid any congestion problems.

This chapter will not cover any IOS QoS mechanism in depth. For a quick overview of IOS QoS mechanisms, please read Chapter 9 of my book entitled CCNP BCMSN Exam Cram 2 (642-811), Second Edition by Que Publishing (ISBN: 0789729911).