Hashing functions are used to create a digital signature by taking a variable-length input, such as user data or a packet, along with a key and feeding it into a hashing function. The output is a fixed-length result. If the same input is fed into the hashing function, it will always result in the same output.

Hashing Message Authentication Codes (HMAC) functions are a subset of hashing functions. HMAC functions were developed specifically to deal with authentication issues with data and packets. HMACs use a shared secret symmetric key to create the fixed output, called a digital signature or fingerprint. Generic hashing functions have a drawback: If an eavesdropper can intercept the sent data, he can easily generate his own signature of the data and send this "doctored" information to you. HMAC overcomes this problem by using a shared secret key to create the digital signature; therefore, only the parties that know the key can create and verify the signature for sent data.

With HMAC functions, if the same data and same secret key are used to generate a signature, they will always generate the same signature; if you change the data or the key value, the resulting signature changes. 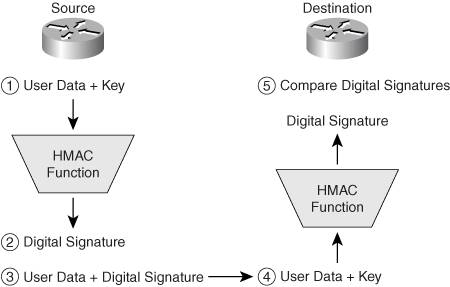 Many VPN implementations use HMAC functions to verify that packet contents haven't been tampered with, such as IPsec's Authentication Header (AH) protocol and the Encapsulation Security Payload (ESP) protocol. The following two sections will discuss two of the most popular HMAC functions: MD5 and SHA.

The Secure Hashing Algorithm (SHA) was developed by NIST and specified in the Secure Hash Standard (SHS FIPS 180). A revision was made to the original HMAC function, called SHA-1, in 1994. It is detailed in the ANSI X9.30 standard. Using SHA-1 in VPNs such as IPsec is described in RFC 2404. SHA-1 creates a 160-bit signature (20 bytes in length). SHA-1 is slower than MD5, but more secure; because its signature is larger, it is stronger against brute force attacks to break the function and discover the shared secret key.

In early 2005, certain groups of people have proven that it is possible to create the same signature with different inputs than the original inputs in MD5, creating what is called a collision. This can create security issues because it is now possible, in MD5, to create false signatures on a very small scale. Because of this, most vendors support the use of SHA. However, there are reports that the current version of SHA also suffers from this problem. There has not been that much concern about this problem with VPN implementations, but there has with other applications. Because of this possible security issue, work is being developed on SHA-256 and SHA-512, which have much longer signature lengths (256-bit and 512-bit) than MD5 and SHA, making it extremely unlikely, with current computing technology, that collisions can be created purposefully for signatures.

As a destination device, how can you verify that packets sent to you are coming from a trusted source which can be verified, versus packets being sent to you from an attacker? HMAC functions can be used for this verification process. We can use packet authentication, through HMAC functions such as MD5 and SHA, to verify that a packet is sent by a trusted source and that it wasn't tampered with while in transit.

As a simple example of using these functions for the verification process, I'll use authentication with a routing protocol. One concern for a router administrator is using a dynamic routing protocol and accepting routing updates from a valid source. You wouldn't want an attacker to corrupt your routing tables by sending your routers false routing information.

One question that I'm commonly asked about VPNs is "Why would you need to perform packet authentication if you're already using encryption?" For example, obviously the only way to decrypt data successfully is if the destination has the encryption key that was used for the initial encryption. Even though that is true, there are still two issues. First, after decrypting the information, you would need to verify that what was decrypted was actually the information sent and not spoofed traffic. Second, a hacker could take advantage of this process by spoofing packets to your device, causing it to waste CPU cycles to decrypt the traffic.

Hashing functions require very few CPU cycles to create and verify the digital signature (hashed output). So they are more efficient. Therefore the following steps typically occur in protecting information between a source and destination in a VPN implementation, as shown in Figure 2-3 and detailed in the following step sequence: 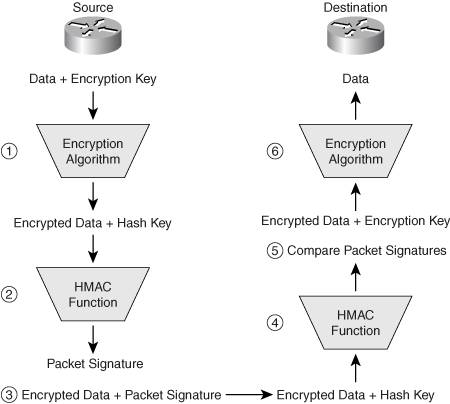 There are three main issues with the use of HMAC functions:

The following three sections will discuss each of these issues in more depth.

HMAC functions have more than one problem, including: both devices that share and protect data need the same key. Somehow the symmetric key must be shared for the HMAC function the two devices are using. Of course, if you send the shared key across a public network, the key is susceptible to an eavesdropping attack.

One option is to hard-code the key on both devices; however, this option does doesn't scale well in large networks where a security policy states that keys should be changed periodically. Another option is to use an already encrypted connection across which to share the key. This assumes, though, that an encrypted connection exists between the peers. The "Key Exchange" section later in this chapter will explore this issue in more depth.

One solution is to not include all fields in a packet when computing the digital signature with the HMAC function; for example, include only the user data, or certain fields of packet or segment headers that you know won't be changed by an intermediate device. Basically, you would have to exclude all mutable fields, or fields that had the possibility of being altered. These fields include the following in an IP packet: IP address fields, the time-to-live (TTL) field, the type of service (TOS) field, the TCP or UDP port number fields, and possibly other fields.

Even though HMAC functions commonly are used for authentication and integrity checking functions, one issue might arise with certain VPN implementations. I'll use IPsec as an example and one of its security protocols: AH (discussed in more depth in Chapter 3, "IPsec"). AH supports both the MD5 and SHA-1 HMAC functions.

Assume that AH needs to protect 200 bytes of data with SHA-1. SHA-1 creates a 160-bit signature, which is 20 bytes. The addition of the signature adds 10 percent overhead to the data transfer, assuming that the average packet size sent was 200 bytes. In addition, AH can use either MD5 or SHA-1, making the AH packet length variable, because MD5 adds 16 bytes for the signature and AH 20 bytes. IPsec's dilemma was to set the signature field to a fixed 12 bytes, meaning that AH and ESP include only the first 12 bytes no matter whether MD5 or SHA-1 is used.

This is a problem because if you use only part of the hashed output of the signature, there is more of a chance an attacker might find data that produces the same partial hash signature. For example, with MD5's signature being 16 bytes in length, it would take 2128 different guesses at messages before finding one that produced the same signature (a collision). If you decided to only use the first 8 bytes of the MD5 signature to reduce the size for efficiency, it might take an attacker 264 guesses; or assuming that the attacker had to go through only half the number of possibilities, then he would have to go through only 263 guesses to find the data that produced the same signature. Because IPsec has AH and ESP using 12 bytes for the signature, it might require the attacker to go through 296 possibilities to find the message.

Also, because IPsec isn't using all the bits of the signature, there is a chance, albeit a small chance, that the data sent might get corrupted. In addition, when the destination received the sent data, the destination might be able to duplicate the same signature and assume the corrupted data was valid. However, given that 12 bytes produces a result of 296 possibilities, it would be extremely rare to run into this situationyou would actually have a better chance of winning the state lottery than finding a corrupted packet that the destination found valid through the process of a truncated signature of 12 bytesbut winning the lottery would definitely be a lot more fun!

Just because a VPN implementation says it supports a particular security function, for example, AH and ESP supporting MD5 and SHA or 3DES using three separate keys, that doesn't mean that it implements these features the way they were intended. In AH's and ESP's case, they truncate the length of MD5 and SHA-1's signatures to a fixed length of 12 bytes, reducing the level of security natively provided by MD5 and SHA-1.