Requiring a Specific Version of a Gem

Your program depends on an interface or feature of a gem found only in particular versions of the library. If a user tries to run your program with the wrong version installed, you want to tell them which version you require, so they can upgrade.

The rubygems library defines a method, Kernel#require_gem, which is a kind of assertion method for gems. It will raise a Gem::LoadError if the given gem is not installed, or if no installed version of a gem meets your requirements.

The easiest solution is to allow any version of a gem; you don need to use require_gem at all:


This is equivalent to requiring a minimum version of 0.0.0:


If you can use just any version of a gem, its usually safe to require a minimum version, relying on future versions to be backwards-compatible:[2]

[2] The first require_gem command in this code snippet returns false not because the cmdparse gem isn there, but because weve already loaded the cmdparse library (in the very first code snippet of this recipe). The require method only returns true the first time it loads a library.

Figure 18-1. Anatomy of a version number 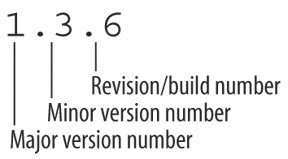 Some packages have only a major and minor version number (such as 2.0 or 1.6), and some have additional numbers after the revision number, but the three-number convention is the accepted standard for numbering Ruby gems.

Version numbers are not decimal numbers: version 1.10 is more recent than version 1.1, not the same. Version numbers should be represented as a string or an array of integers, not as a floating-point number or BigDecimal.

A version requirement can also use the special ~> comparison operator, which restricts certain parts of the version number while leaving the others alone. Youll usually use it to restrict the installed version of a gem to a particular minor version, but allowing any revision number. For instance, the version requirement ~> 2.0 will match any version with a major number of 2 and a minor number of 0: 2.0, 2.0.1, 2. 0.2, and 2.0.20 will all be accepted. ~> 2 will match any version whose major number is 2; 2.0, 2.1, and 2.10 will all be accepted.

A library is supposed to increment its major or minor version whenever the published API changes, so ~> is designed to let you require a particular version of a librarys API. This is slightly more restrictive than requiring a minimum version, and is useful if the API changes drastically between versions, or if you anticipate incompatible changes in the future.

Since a single Ruby installation can have multiple versions of a single gem installed at once, theres no technical reason (other than disk space) why you can make your users install the exact same versions of the gems you used to develop your program:


However, its usually not necessary, and such draconian specificity imposes burdens on the programmers as well as the users. Its usually better to use >= or ~>.

If a particular version of a library has an awful bug in it, you can refuse to use it with code like this:


You can combine comparison operators by making multiple calls to require_gem. For instance, you can simulate ~> with two calls: