By abstracting the abstract data type itself, we achieve what is called a MetaObject. A MetaObject is an object that describes the structure of another object.[2]

[2] Meta, the latin root meaning about, is used for its literal definition here.

A class that has a MetaObject supports reflection. This is a feature found in many object-oriented languages. It does not exist in C++, but Qt's MetaObject compiler (moc) generates the code to support this for desired classes.

As long as certain conditions apply,[3] each class derived from QObject will have a QMetaObject generated for it by moc, as shown in Figure 15.2. QObject has a member function that returns a pointer to the object's QMetaObject.

[3] Each class must be defined in a header file, listed in the project file's HEADERS, and must include the Q_OBJECT macro in its class definition. 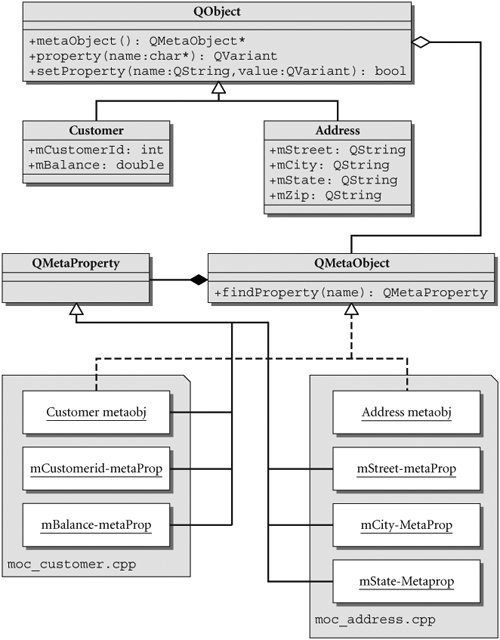 A QMetaObject can be used to invoke functions such as:

The signal and slot mechanism also relies on the QMetaObject.

By using the QMetaObject and QMetaProperty, it is possible to write code that is generic enough to handle all self-describing classes.