Both kinds of containers can grow at runtime by allocating additional heap memory as needed. This is always done in an exception-safe way, so you don't need to worry about possible memory leaks.

In the case of pointer containers to heap objects, however, one must decide which class is responsible for managing the heap objects. UML diagrams can distinguish between managed and unmanaged containers by using composite (filled diamond) and aggregate (empty diamond) connectors, as shown in Figure 10.2.

In general, we can say that a managed container is a composite, because the container manages its pointed-to objects. In other words, when a composite is destroyed, it destroys (cleans up) its entire self (because the smaller objects are part of its composition).

When one object embeds another as a sub-object, it is also considered a composition.

In Figure 10.2, there are two kinds of Customer containers, CustomerList and CustDb. CustDb and CustomerList both reuse template containers. CustomerList objects are aggregatestemporary structures to hold the results of a query, or a user selection. CustDb, on the other hand, is a singleton composite that manages all of the Customer objects that exist.

Typically, a managed container deletes any heap objects it "owns" when the container itself is destroyed. With a Qt container of pointers, one can use qDeleteAll(container), an algorithm that calls delete on each element in the container.

Copying a managed container can be defined in a number of ways:

When a container only provides an indexing or reference navigation mechanism to its objects we call it an aggregate container.

This exercise involves designing some data types to represent a deck and a hand of cards. The following UML diagram suggests one way of representing them. 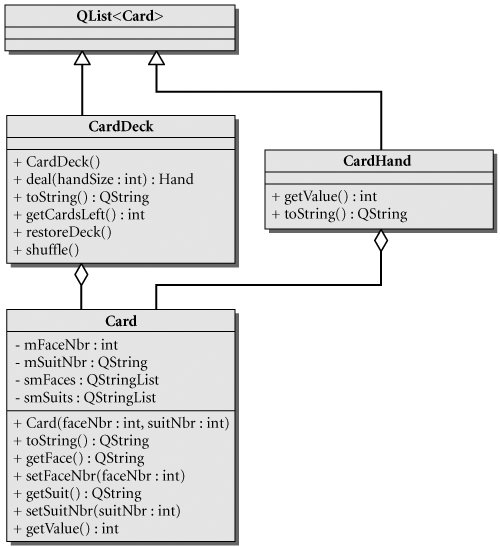 Here are some hints: