The QMainWindow correctly creates the slidable QSplitters between the central widget and the QDockWidgets. The two principal QMainWindow functions for managing the dock window regions are

DockWindows are very important in integrated development environments, because different tools or views are needed in different situations. Each view is a widget, and they can all be "plugged" into the main window quite easily with the docking mechanism as shown in Figure 11.8. 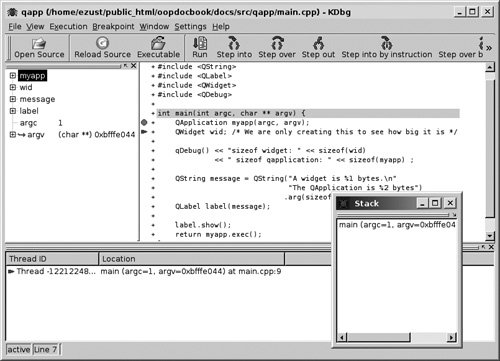 Like most KDE applications, kdbg, the stand-alone KDE debugger, makes use of DockWindows. kdbg has a source code window (central widget) and dockable views for things such as:

These widgets do not all need to be visible at the same time, so there is a View menu that lets you select or de-select all of the different views. QMainWindow::createPopupMenu() returns this menu, permitting you to add it to toolbars or other pull-down menus.