A widget can be popped up on the screen, like a dialog, or it can be made a part of a larger window. Whenever we wish to arrange smaller widgets inside larger ones, we use layouts. A layout is an object that belongs to exactly one widget. Its sole responsibility is to organize the space occupied by its owner's child widgets.

Although each widget has a setGeometry() function that allows you to set its size and position, absolute sizing and positioning are rarely used in a windowing application because they impose an undesirable rigidity on the design. Proportional resizing, splitters, scrollbars when needed, and flexible arrangement of visual space are all achieved quite naturally through the use of layouts.

The process of specifying the way that your widgets will be arranged on the screen consists of dividing the screen into regions, each controlled by a QLayout. Layouts can arrange their widgets

Layouts are not widgets, and they have no visual representation. Qt supplies an abstract base class named QLayout plus several concrete QLayout subclasses: QBoxLayout (particularized to QHBoxLayout and QVBoxLayout), QGridLayout, and QStackedLayout. Each of the layout types has an appropriate set of functions to control the spacing, sizing, alignment, and access to its widgets.

For its geometry management to work, each QLayout object must have a parent that is either a QWidget or another QLayout. The parent of a QLayout can be specified when the layout is constructed by passing the constructor a pointer to the parent widget or layout. It is also possible to construct a QLayout without specifying its parent, in which case you can call QWidget::addLayout() at some later time.

Layouts can have child layouts. One layout can be added as a sub-layout to another by calling addLayout(). The exact signature depends on the kind of layout used. If the parent of a layout is a widget, that widget cannot be the parent of any other layout. 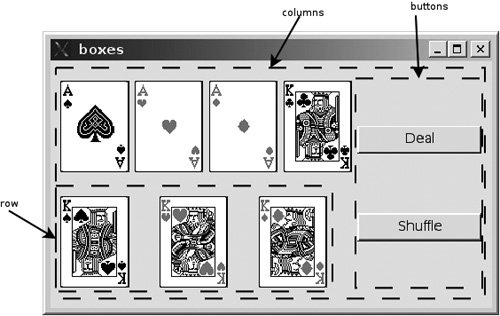 CardTable is implemented in Example 11.11 by making use of the fact that a QLabel can hold an image. This implementation demonstrates some simple but useful layout techniques.

The simple piece of client code shown in Example 11.12 suffices to put the window on the screen.

To get finer control over the layout of widgets, we can use the API of the QLayout class. Box layouts, for example, offer the following functions:

Revisiting Example 11.11, we will make the layout behave a little better during resizing. Figure 11.6 shows the results of adding some stretch and some spacers to this application. 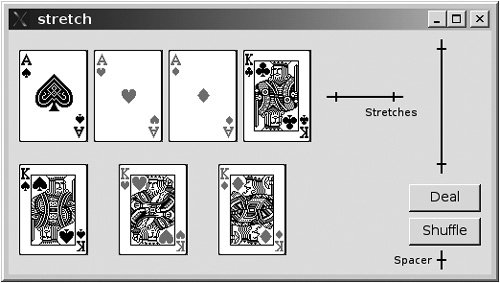 If you build and run this application using the code from Example 11.13 instead of Example 11.11, you can resize the main window and observe that the buttons no longer grow, and are pushed off to the corner. The horizontal spacing between the cards does not grow, but the vertical spacing does.

Figure 11.7 shows the basic layout for our next example, which demonstrates what happens when a widget is added to more than one layout. 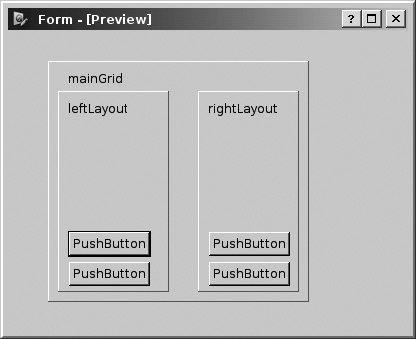 This application moves QLabels from one layout to the other in response to the button press. In Example 11.14 we derive from QApplication a class that defines the GUI.

The constructor starts by creating the layouts and the various widgets, as we see in Example 11.15.

After creation of the various layouts and widgets, signals must be connected to slots, as we see in Example 11.16.

Because a widget cannot exist in more than one layout at any given time, it disappears from the first layout and shows up in the new one. Each widget retains its parent after the layout change. The code for the movement slots is shown in Example 11.17. 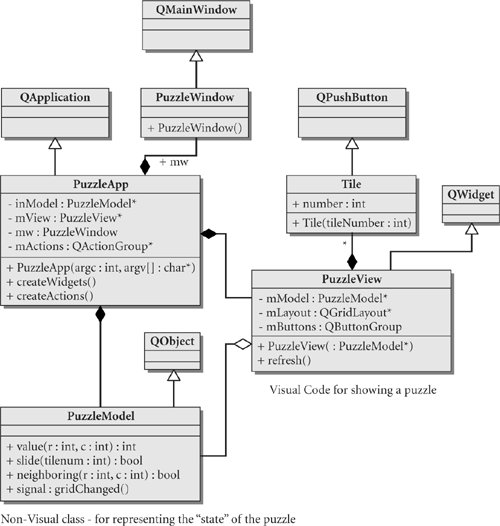