Multiple inheritance with QObject is discussed further in Qt Quarterly.[3]

Figure 23.4 shows a UML diagram where multiple inheritance is being used incorrectly, for both interface and implementation. To make things even more complicated, we are inheriting from the same base class twice. 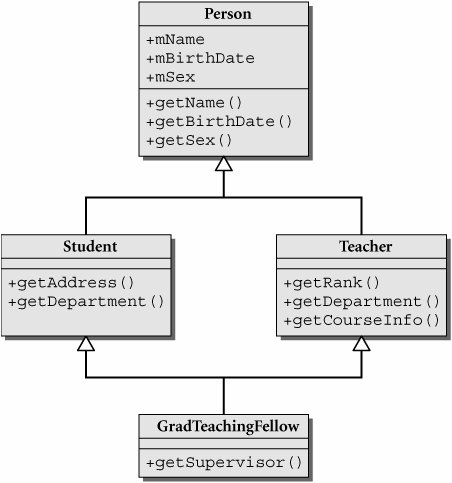 Here, the class GradTeachingFellow is derived from two classes: Student and Teacher.


Name conflicts and design problems can arise from the improper use of multiple inheritance. In the above example, geTDepartment() function exists in both Student and Teacher. The student could be studying in one department and teaching in another, for example.

Inheritance conflicts like these should be avoided because they lead to much design confusion later. However, in this case they can also be resolved with the aid of scope resolution.

In Figure 23.4, we inherited more than once from the same base class. There is another problem with that model: redundancy. When we create instances of this multiply inherited class, they might look like Figure 23.5. 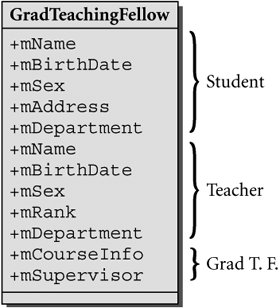 Person has attributes that we wish to inherit only once. It makes no sense for a GradTeachingFellow to have two birthdates and two names. virtual inheritance allows us to avoid the redundancy.

The strange problems that can arise when multiple inheritance is used in controversial ways, especially with the added complexities of virtual versus nonvirtual inheritance/functions, seem to have prompted the designers of Java to exclude multiple inheritance from their language. Instead, Java allows the programmer to define an interface, which consists only of abstract (pure virtual) functions. A Java class can then use the implements clause to implement as many interfaces as it needs.

Add the keyword virtual in the classHead as shown in Example 23.8, leaving all the other details of the class definitions the same. 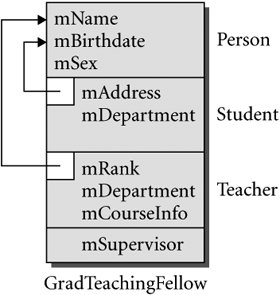 Each instance of a class that virtually inherits from another has a pointer (or a variable offset) to its virtual base class subobject. The virtual base class pointer is invisible to the programmer and, in general, not necessary to change.

With multiple inheritance, each virtual base class pointer points to the same object, effectively allowing the base class object to be shared among all of the derived-class "parts."