Inheritance is a way of organizing classes that is supported by all object-oriented languages. It allows different classes to share code in many different ways.

To employ inheritance, we place the common features of similar classes together in a base class and then derive other classes from it. Each derived class inherits all the members of the base class and can override or extend each base class function as needed. Inheritance from a common base class significantly simplifes the derived classes and, with the use of certain design patterns, allows us to eliminate redundant code.

Refactoring is a process of improving the design of software, without changing its underlying behavior. One step of refactoring involves replacing similar code with calls to library functions or base class methods.

We will demonstrate inheritance with a simple example. The base class Student is supposed to contain the attributes that are common to all students. We kept the list of attributes short for this example, but you can easily imagine other attributes that might be appropriate. 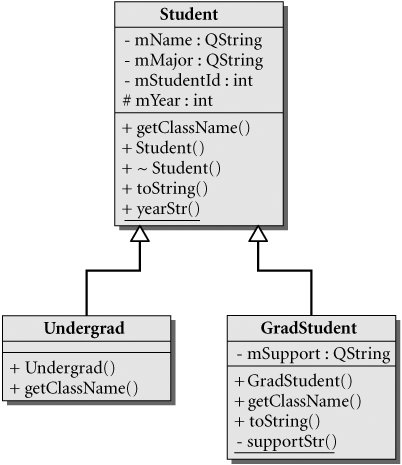 The pound sign (#) that precedes Student::m_Year indicates that m_Year is a protected member of that class. Recall that protected members of a class are accessible to the member functions of derived classes. The open arrowhead (pointing at the base class) is used to indicate class inheritance. This arrow is also called generalization because it points from the more specific (derived) class to the more general (base) class. The derived classes are also called subclasses of the base class.

Example 6.1 shows the definitions of the three classes.

The classHead of each derived class specifies the base class from which it is derived and the kind of derivation that is being used. In this case we are using public derivation.[1]

[1] We discuss the three kinds of derivationpublic, protected, and privatein Section 23.4.

Notice that each of the three classes has a function named getClassName(), and two of them have a function named toString(). Even though Undergrad does not contain a toString() declaration in its definition, it inherits one from the base class.

The student functions are defined in Example 6.2.

Undergrad is not very different from Student, except for one function: getClassName().

Member Initialization for Base Classes

Because each Undergrad is a Student, whenever an Undergrad object is created, a Student object must also be created. In fact, one Student constructor is always called to initialize the Student part of any derived class. In the member initializers of a constructor, you can think of the base class name as an implicit member of the derived class.

GradStudent has all the features of Student plus some added attributes that need to be properly handled.

It is worth noting here that, since most of the data members of Student are private, we need a base class function (e.g., toString()) in order to access the base class data members. A GradStudent object cannot directly access the private members of Student even though it contains those members. This arrangement definitely takes some getting used to!

To build this application we use qmake and make as follows:

[2] It would be nice if we saw [GradStudent] here.

Calling student->toString() from the function graduate() invokes Student::toString() regardless of what kind of object student points to. If the object is, in fact, a GradStudent, then there should be a mention of the fellowship in the graduation message. In addition, we should be seeing "[GradStudent]" in the toString() messages, and we are not.

It would be more appropriate to use run-time binding for indirect function calls to determine which toString() is appropriate for each object.

Because of its C roots, C++ has a compiler that attempts to bind function invocations at compile time, for performance reasons. With inheritance and base class pointers, the compiler can have no way of knowing what type of object it is operating on. In the absence of run-time checking, an inappropriate function can be called. C++ requires the use of a special keyword to enable run-time binding on function calls via pointers and references. The keyword is virtual, and it enables polymorphism, which is explained in the next section.