The Trace Analysis tool is a postprocessing tool that allows analyzing of XML trace files via a web GUI. The tool is available from the Cisco CallManager Serviceability Trace menu and provides trace details to help narrow your investigation of system problems.

When you are using the Trace Analysis tool, it is possible to specify what kind of information you need when analyzing the Cisco CallManager trace files. When troubleshooting, this makes it easier to go through the trace files and get the necessary information.

In the Trace Analysis window, choose what kind of information to analyze and from which trace file by following these steps:

From the selections that you made for trace analysis, Cisco CallManager creates a web page giving all the desired data. Figure 32-10 shows an example output. 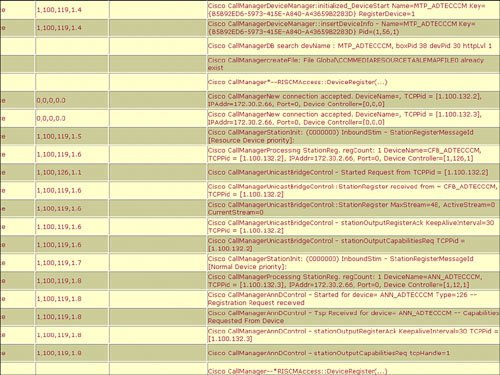 You can directly open trace files from the folders where they are stored (subdirectories under C:Program FilesCiscoTrace). You can use text editors (for XML and .txt files) or XML viewers or editors to view XML files. Trace files in .txt format cannot be analyzed by using the Trace Analysis tool. They can be analyzed by the Q.931 Translator tool; however, this tool interprets only Q.931 messages. To examine other messages from stored .txt trace files, you can use a text editor, as shown in Figure 32-11. Cisco TAC also provides other in-depth trace analysis tools such as Translator X, Triple Combo, and the Voice Log Translator (VLT). 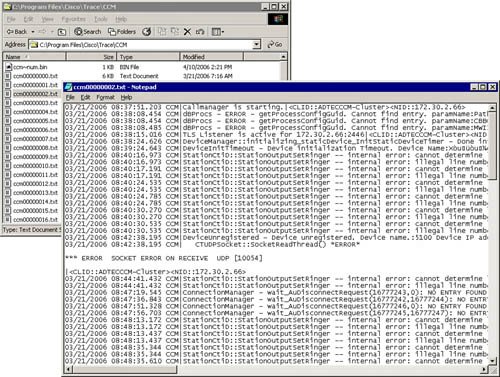