The following sections discuss the basic operation of call routing and call queuing as they relate to Cisco CallManager Attendant Console.

Figure 18-3 shows the interaction of the Cisco CallManager Attendant Console components in a basic call-routing example when a call is made to a number that is configured as a pilot point and associated with a hunt group. In this example, 4000 is a support number associated with a support hotline. 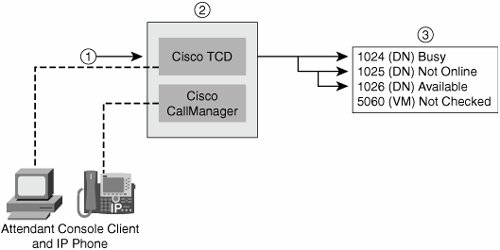 The process numbered in Figure 18-3 is as follows:

You can configure a pilot point to support call queuing so that when a call comes to a pilot point and all hunt groups members are busy, Cisco CallManager Attendant Console sends calls to a queue. While in the queue, callers hear MoH if you have chosen an audio source from the Network Hold Audio Source and the User Hold MoH Audio Source drop-down lists in the Device Pool window. The attendants cannot view the queued calls, with the exception of Broadcast groups (covered in the "Attendant Console GUI: Broadcast Calls" section later in this chapter). When a hunt group member becomes available, Cisco TCD redirects the call to that hunt group member. This sequence of events is reflected in Figure 18-4.