When a Windows PC has Cisco VT Advantage installed, it should be connected to the secondary Ethernet port (that is, PC port) of a Cisco IP Phone 7940G, 7960G, or 7970G (or later) model. In most configurations, the PC will be in a different VLAN than the Cisco IP Phone (located in the voice or auxiliary VLAN). In such configurations, all IP-based communication between Cisco VT Advantage and the Cisco IP Phone has to be routed between the VLANs, and only Cisco Discovery Protocol is exchanged directly. The following list explains the call process shown in Figure 29-1: 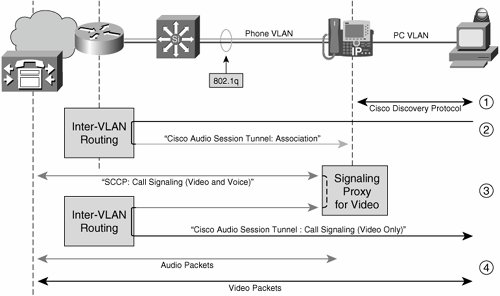 For privacy, the participants can switch to a mode called receive-only mode to prevent the camera from sending a picture to the other end of the call. Table 29-3 shows various scenarios of the calling or the called party activating or disabling receive-only mode.

When Cisco VT Advantage is not running on your PC or on the PC of the remote peer, the call functions as a regular telephone call without video.