One of the most important steps in securing an IP telephony server is installing all the applicable product or component security updates and then making sure that they are kept up to date. Cisco provides three types of updates for the Cisco IP Telephony Operating System:

An IP telephony server must be used for IP telephony purposes only. The server should not be used as a common file server that stores user data or has user applications, such as Microsoft Office products, installed on it. File-share access has to be limited to the absolute minimum needed (for instance, to access log files and generate reports). Strict file access control has to be deployed, and auditing of network file access should be enabled. This practice also eliminates the need to add user accounts to the server; only administrator and auditor accounts should exist. If network file access is not needed at all, it should be disabled to enhance the security of the server.

Do not install any other application on the servers unless it is approved software, such as Cisco Security Agent or antivirus products. A hardened IP telephony server has to be stripped down to run only the services and applications that are needed for its operation.

As shown in Figure 20-2, the optional security script and some additional information are available in the C:utilsSecurityTemplates folder. 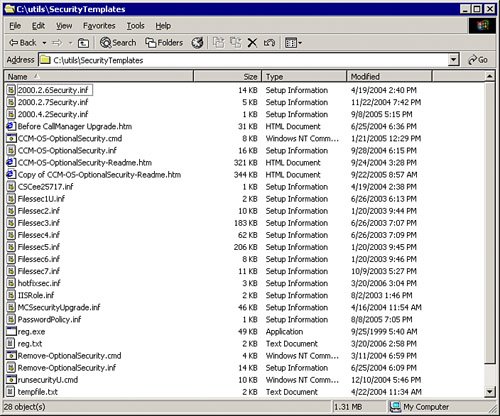 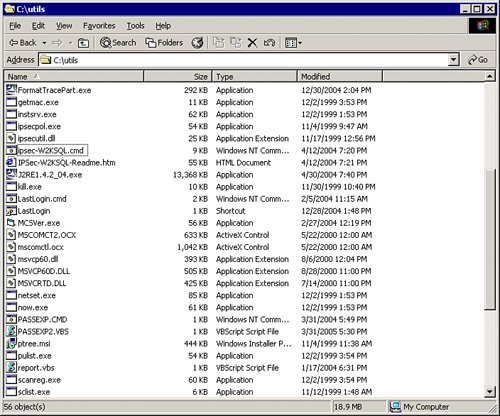 The name of the IPSec-W2kSQL file has nothing to do with the IPsec virtual private network (VPN) umbrella standard.

To secure the access to file shares, limit access to the absolute minimum number of users who need it, as shown in Figure 20-4. Check the share permissions on all shared folders, for example, the CDR and TFTPPath folders. Avoid assigning share permissions for the Everyone group. You can find detailed information on how to secure file shares in the CCM-OS-OptionalSecurity-Readme guide, located in the folder C:UtilsSecurityTemplates. 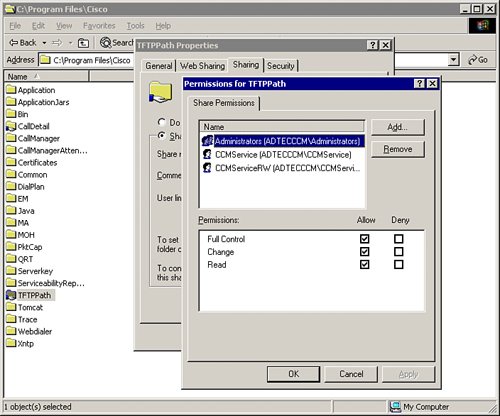