Using video endpoints in the Cisco CallManager system is, from the perspective of a user, as easy as placing a telephone call. Video terminals can be either H.323- or SCCP-controlled and are able to communicate with each other regardless of the protocol controlling the device. All video devices use the same dial plan as all other devices in the Cisco CallManager system. For Cisco CallManager, video devices are treated like voice devices, with the same configuration options. For the Cisco VT Camera, the same DN as the associated IP Phone is used. There is no additional number to remember to be able to reach someone over the video system. The video signaling is transparent to the user, and the devices negotiate their video capabilities, such as codec, format, and bit rate used for the video call, with no additional user action.

For videoconferences in the Cisco CallManager system, extra hardware is required. The device that mixes the video streams is an MCU.

In the example shown in Figure 28-2, the video-enabled endpoints report their video and audio capabilities to Cisco CallManager. Cisco CallManager now treats the endpoints simply as video phone devices. When a call is placed or received between two video-enabled devices, Cisco CallManager signals for both audio and video streams. First the audio capabilities, such as audio codec information and audio bit rate, are signaled and negotiated, and then the audio stream is set up. After the audio stream is set up, the video capabilities, such as video codec information and video channel bit rate, are negotiated, and the devices exchange their video streams separately from the audio. In this example, the video call has four RTP streamstwo unidirectional RTP streams for voice and two unidirectional RTP streams for video transmission. 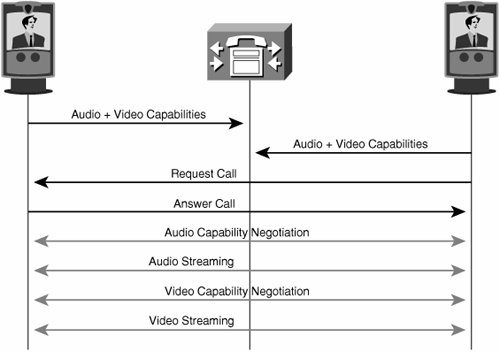 Cisco CallManager supports several standard video codecs and a Cisco proprietary video codec. H.263 is a video codec specified by the International Telecommunication Union Telecommunication Standardization Sector (ITU-T) as a low-bit-rate encoding solution for videoconferencing. It was first designed to be used in H.324-based systems (PSTN and other circuit-switched network video environments) but has since found use in these other solutions as well:

The next enhanced codec specified by the ITU-T after H.263 is the H.264 standard. Because H.264 provides a significant improvement in capability beyond H.263, the H.263 standard is now considered primarily a legacy design (although this is a recent development). Most new videoconferencing products include H.261, H.263, and H.264 capabilities.

The video codecs supported by Cisco CallManager Release 4.1 include H.261, H.263, and H.264. These codecs exhibit the parameters and typical values listed in Table 28-1.

The Cisco Wideband codec is a proprietary codec that is a fixed-bit-rate codec and runs on a PC that is linked to a phone. It enables the PC to associate with a call that the phone receives and can only be used by the Cisco VT Camera.