An MTP is an entity that accepts two full-duplex G.711 streams. It bridges the media streams together and allows them to be set up and torn down independently. Simply put, the MTP allows a call to be held (maintained) when a user places it on hold due to one of the services mentioned previously. The streaming data received from the input stream on one connection is passed to the output stream on the other connection, and vice versa. In addition, the MTP transcodes G.711 a-law to G.711 mu-law, and vice versa, and adjusts packet sizes as required by the two connections.

When needed, an MTP is allocated and connected into a call on behalf of an H.323 endpoint. After being inserted, the media streams are connected between the MTP and the H.323 device, and these connections are present for the duration of the call. The media streams connected to the other side of the MTP can be connected and disconnected as needed to implement features such as hold, transfer, and so forth.

By default, any Cisco CallManager software-based MTP resources are automatically added to the cluster when you have activated the Voice Media Streaming Application on a server. If you do not want a CallManager server to participate in MTP processing (which saves resources), delete the server from under the MTP Configuration window. Hardware-based MTP resources (known as Cisco IOS Enhanced Software Media Termination Points) must manually be added to the cluster. 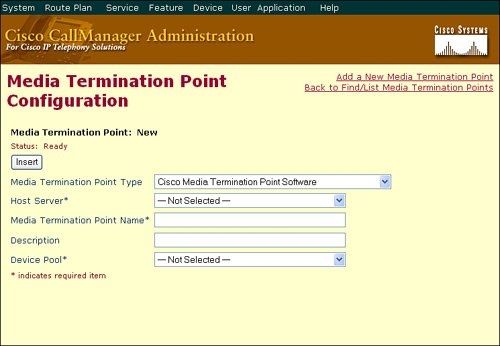 From here, you can choose to add a software- or hardware-based conference bridge to the CallManager cluster configuration. Table 15-4 describes the configuration options available from this window.