Unlike classic enterprise PKI deployments, the PKI topology in Cisco IP telephony is not a single PKI system. Instead of having a single Certificate Authority (CA) that issues all certificates, there are several instances issuing certificates: 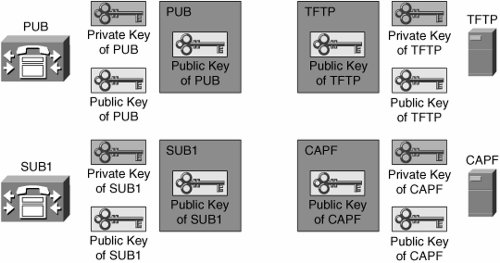 Currently, the Cisco 7911, 7941, 7961, 7970, and 7971 IP Phones have a certificate installed by Cisco in nonvolatile memory. This allows the IP phone to be capable of communicating securely with the CallManager out of the box. Cisco highly recommends that you replace these MICs with your own certificate as soon as possible. Figure 26-4 illustrates the keys used when an IP phone comes with an MIC preinstalled.

LSCs are certificates that you install to the IP phone. These can be installed from the CAPF CallManager function or from another CA. When deploying the LSCs to the IP phones, you have a major choice to make:

Of course, the factor that this decision hinges on is risk. By automatically deploying LSCs to the IP phones, you assume that all the phones that are currently plugged into the network are "friendly." The CallManager will automatically deploy LSCs to all phones. If a hacker has a phone plugged into the network, it will also get an LSC and become a trusted device. The alternate, manual method creates a huge amount of administrative overhead because you must visit each device and manually enter a sequence of digits provided by the CAPF. However, by following this method, you ensure that each IP phone be physically verified before it is considered a trusted device.

As shown in Figure 26-5, the CAPF can either generate LSCs itself, or it can act as a proxy between the IP phone and some other CA. 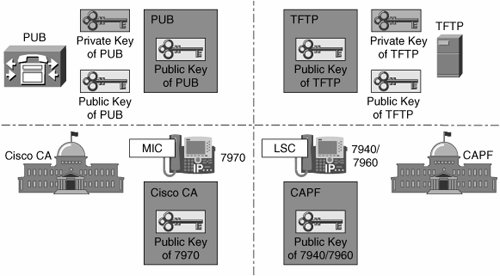 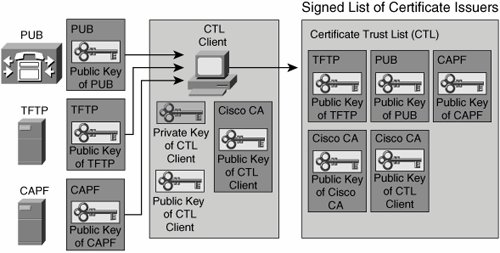 The CTL usually includes these certificates:

As shown in Figure 26-8, When an IP phone boots, the CTL is downloaded from the TFTP server to the IP phone. It contains all certificates of the entities that issued self-signed certificates. By having this list, the IP phone knows which PKI roots to trust and can trust all certificates that have been issued by any PKI root contained in the CTL.

The CTL file needs to be updated after configuration changes, such as changing or adding IP telephony servers or security tokens to the system.

The CTL also acts as an authorization list because it specifies which certificates belong to which IP telephony function. A TFTP server, for instance, is not allowed to sign a CTL, only IP phone configuration files. The CAPF, as another example, is allowed to sign the LSCs of other IP phones only but not the CTL or any TFTP files.

CTL Verification on the IP Phone

Every time that an IP phone receives a new CTL, the new CTL is verified. It is accepted by the IP phone only if it was signed by the Cisco CTL client using one of the administrator tokens. The phone can verify the signature using the public key (the certificate) of the Cisco CTL client (in fact, the certificate of the appropriate administrator token), which must be included in the currently installed ("old") CTL.

For the first download of a CTL to an IP phone, there is an issue: How does an IP phone know which administrator tokens are trusted without already having a CTL? This problem occurs only at initial deployment, when the phone does not yet have a local CTL. In this case, any administrator token could pretend to be a valid token for the IP telephony system in question. An attacker could either replace the CTL file on the TFTP server with a falsified file or change the CTL file in the path between the IP phone and the TFTP server.

The problem can be solved by downloading the initial CTL over a trusted network to ensure that no falsified initial CTL is loaded to the phone. When the phone has a valid CTL, it will trust new CTLs only if they are signed using a security token that is already known to the IP phone. If the CTL file in the IP phone is erased, the same problem occurs. Again, you must ensure that the next CTL download is done over a trusted network path because the IP phone will blindly accept any CTL.

After the IP phone is deployed, it is usually difficult to trust the network path between the phone and Cisco CallManager. Therefore, a user should not be able to erase the initially installed CTL. There are two ways to remove a CTL from an IP phone: a factory reset or the IP phone Settings menu. A factory reset is not simple, but using the Settings menu is rather easy. To prevent users from using the Settings menu to remove the CTL, you should disable settings access at the phone. When using authentication strings as the authentication method during CAPF phone certificate operations, you have to enable settings access during the enrollment. After successful enrollment, you should then disable settings access again.