Call Admission Control Within a Cluster

Why do you need to configure call admission control for video calls? The answer to this question is quite simple. If you do not control the number of video and voice calls over your WAN links in a centralized deployment (shown in Figure 28-5), periodically you will see decreased video and voice throughout the whole system. With call admission control, you control the number of calls on the WAN link and ensure that all calls, video and audio-only, are processed throughout the network with acceptable quality. 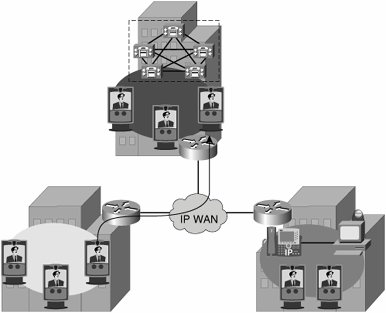 Calls between devices at the same location do not need call admission control because the assumption is that these devices reside on the same LAN that has "unlimited" available bandwidth. However, for calls between devices at different locations, the assumption is that there is an IP WAN link in between that has limited available bandwidth.

When you are configuring a region, you set two fields in Cisco CallManager Administration: the Audio Codec and the Video Call Bandwidth fields, as shown in Figure 28-6. Note that the audio setting specifies a codec type, whereas the video setting specifies the bandwidth that you want to allow. However, even though the notation is different, the Audio Codec and Video Call Bandwidth fields actually perform similar functions. The Audio Codec value defines the maximum bit rate allowed for audio-only calls and for the audio channel in video calls. 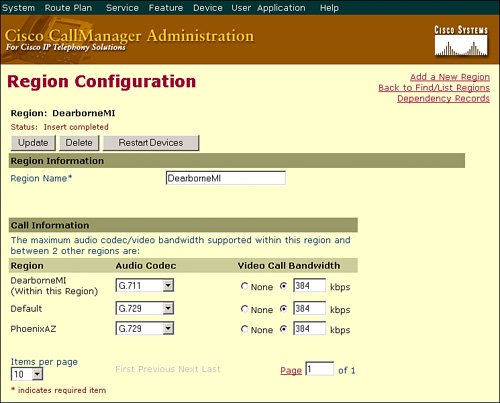 When configuring locations, you also set two fields in Cisco CallManager Administration: the Audio Bandwidth and the Video Bandwidth values, shown in Figure 28-7. Unlike regions, however, audio bandwidth for locations applies only to audio-only calls, whereas video bandwidth again applies to the video call (that is, audio and video channels). 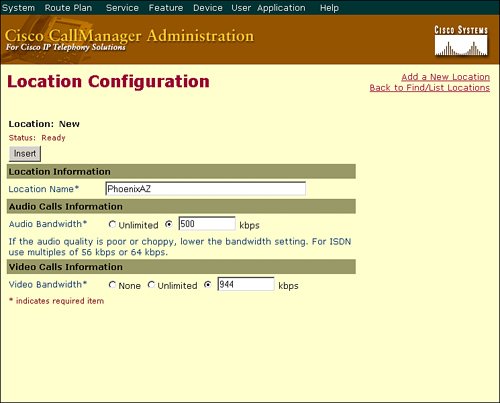 The audio and video bandwidth are kept separate because if both types of calls shared a single allocation of bandwidth, it is very likely that audio calls would take all of the available bandwidth and leave no room for any video calls, or vice versa.

Both the Audio Bandwidth and the Video Bandwidth fields offer three options: None, Unlimited, or a field that accepts numeric values. However, the values entered in these fields use two different calculation models:

The value None in the Video Bandwidth field indicates that video calls are not allowed between this location and other locations. Video calls can, however, be placed within this location.

Figure 28-8 illustrates an example of audio and video bandwidth requirements for a company with a three-site network. The San Francisco location has a 1.544-Mbps T1 circuit connecting it to the San Jose main campus. The system administrator wants to allow four G.729 voice calls and one 384-kbps video call to or from that location. 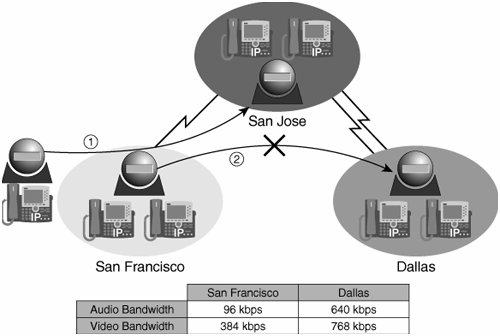 The Dallas location has two 1.544-Mbps T1 circuits connecting it to the San Jose main campus, and the administrator wants to allow eight G.711 voice calls and two 384-kbps video calls to or from that location.

For this example, the administrator might set the San Francisco and Dallas locations to the values in Table 28-5.

If the call fails because of insufficient location bandwidth, it will not be retried with lower-bit-rate codecs. In this scenario, with no further configuration of the Cisco CallManager, the call (both audio and video portions) will be rejected.

The Retry Video Call as Audio setting appears as a check box in the IP Phone configuration in Cisco CallManager Administration, as shown in Figure 28-9. 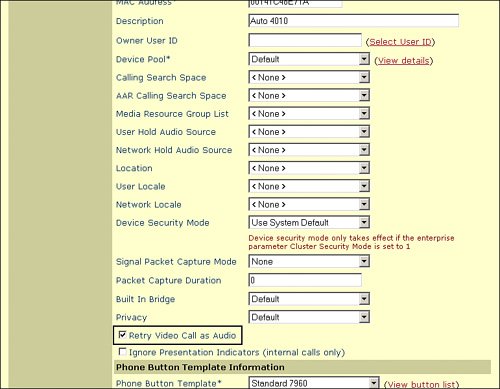 This setting is enabled by default on all device types and applies to these scenarios only:

The Retry Video Call as Audio option takes effect only on the terminating (called) device, allowing flexibility for the calling device to have different options (retry or AAR) for different destinations.

The called device determines the result. In other words, when one device calls another and any of the discussed insufficient bandwidth conditions applies, Cisco CallManager looks at the destination device to see whether the Retry Video Call as Audio option is enabled.