In the preceding section, we showed how to promote software reusability by separating a class definition from the client code (e.g., function main) that uses the class. We now introduce another fundamental principle of good software engineeringseparating interface from implementation.

Interface of a Class

Interfaces define and standardize the ways in which things such as people and systems interact with one another. For example, a radio's controls serve as an interface between the radio's users and its internal components. The controls allow users to perform a limited set of operations (such as changing the station, adjusting the volume, and choosing between AM and FM stations). Various radios may implement these operations differentlysome provide push buttons, some provide dials and some support voice commands. The interface specifies what operations a radio permits users to perform but does not specify how the operations are implemented inside the radio.

Similarly, the interface of a class describes what services a class's clients can use and how to request those services, but not how the class carries out the services. A class's interface consists of the class's public member functions (also known as the class's public services). For example, class GradeBook's interface (Fig. 3.9) contains a constructor and member functions setCourseName, getCourseName and displayMessage. GradeBook's clients (e.g., main in Fig. 3.10) use these functions to request the class's services. As you will soon see, you can specify a class's interface by writing a class definition that lists only the member function names, return types and parameter types.

Separating the Interface from the Implementation

The program of Figs. 3.113.13 separates class GradeBook's interface from its implementation by splitting the class definition of Fig. 3.9 into two filesthe header file GradeBook.h (Fig. 3.11) in which class GradeBook is defined, and the source-code file GradeBook.cpp (Fig. 3.12) in which GradeBook's member functions are defined. By convention, member-function definitions are placed in a source-code file of the same base name (e.g., GradeBook) as the class's header file but with a .cpp filename extension. The source-code file fig03_13.cpp (Fig. 3.13) defines function main (the client code). The code and output of Fig. 3.13 are identical to that of Fig. 3.10. Figure 3.14 shows how this three-file program is compiled from the perspectives of the GradeBook class programmer and the client-code programmerwe will explain this figure in detail.

Header file GradeBook.h (Fig. 3.11) contains another version of GradeBook's class definition (lines 918). This version is similar to the one in Fig. 3.9, but the function definitions in Fig. 3.9 are replaced here with function prototypes (lines 1215) that describe the class's public interface without revealing the class's member function implementations. A function prototype is a declaration of a function that tells the compiler the function's name, its return type and the types of its parameters. Note that the header file still specifies the class's private data member (line 17) as well. Again, the compiler must know the data members of the class to determine how much memory to reserve for each object of the class. Including the header file GradeBook.h in the client code (line 8 of Fig. 3.13) provides the compiler with the information it needs to ensure that the client code calls the member functions of class GradeBook correctly.

(This item is displayed on page 100 in the print version)

Figure 3.13 performs the same GradeBook object manipulations as Fig. 3.10. Separating GradeBook's interface from the implementation of its member functions does not affect the way that this client code uses the class. It affects only how the program is compiled and linked, which we discuss in detail shortly.

Figure 3.13. GradeBook class demonstration after separating its interface from its implementation.

As in Fig. 3.10, line 8 of Fig. 3.13 includes the GradeBook.h header file so that the compiler can ensure that GradeBook objects are created and manipulated correctly in the client code. Before executing this program, the source-code files in Fig. 3.12 and Fig. 3.13 must both be compiled, then linked togetherthat is, the member-function calls in the client code need to be tied to the implementations of the class's member functionsa job performed by the linker.

The Compilation and Linking Process

Figure 3.14. Compilation and linking process that produces an executable application.

(This item is displayed on page 104 in the print version) 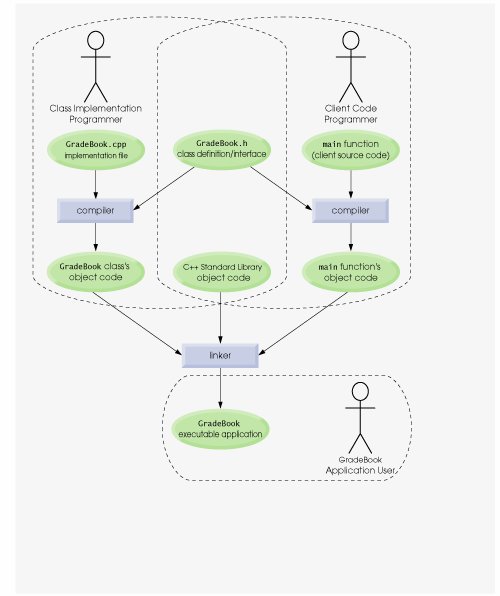 To create the executable GradeBook application to be used by instructors, the last step is to link

The linker's output is the executable GradeBook application that instructors can use to manage their students' grades.

For further information on compiling multiple-source-file programs, see your compiler's documentation or study the Dive-Into™ publications that we provide for various C++ compilers at www.deitel.com/books/cpphtp5.