To understand how C++ performs function calls, we first need to consider a data structure (i.e., collection of related data items) known as a stack. Think of a stack as analogous to a pile of dishes. When a dish is placed on the pile, it is normally placed at the top (referred to as pushing the dish onto the stack). Similarly, when a dish is removed from the pile, it is normally removed from the top (referred to as popping the dish off the stack). Stacks are known as last-in, first-out (LIFO) data structuresthe last item pushed (inserted) on the stack is the first item popped (removed) from the stack.

One of the most important mechanisms for computer science students to understand is the function call stack (sometimes referred to as the program execution stack). This data structureworking "behind the scenes"supports the function call/return mechanism. It also supports the creation, maintenance and destruction of each called function's automatic variables. We explained the last-in, first-out (LIFO) behavior of stacks with our dish-stacking example. As we'll see in Figs. 6.146.16, this LIFO behavior is exactly what a function does when returning to the function that called it.

So, as we have seen, the call stack and activation records support the function call/return mechanism and the creation and destruction of automatic variables. Now let's consider how the call stack supports the operation of a square function called by main (lines 1117 of Fig. 6.13). First the operating system calls mainthis pushes an activation record onto the stack (shown in Fig. 6.14). The activation record tells main how to return to the operating system (i.e., transfer to return address R1) and contains the space for main's automatic variable (i.e., a, which is initialized to 10).

(This item is displayed on page 270 in the print version) 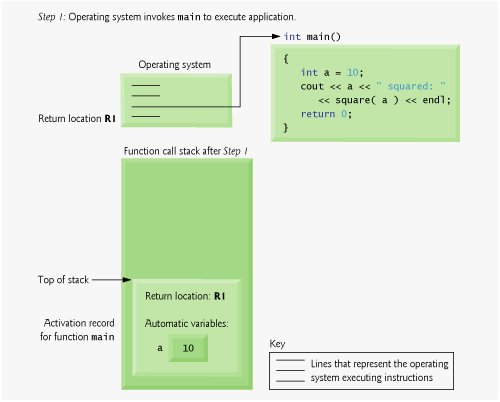 Function mainbefore returning to the operating systemnow calls function square in line 15 of Fig. 6.13. This causes a stack frame for square (lines 2023) to be pushed onto the function call stack (Fig. 6.15). This stack frame contains the return address that square needs to return to main (i.e., R2) and the memory for square's automatic variable (i.e., x). 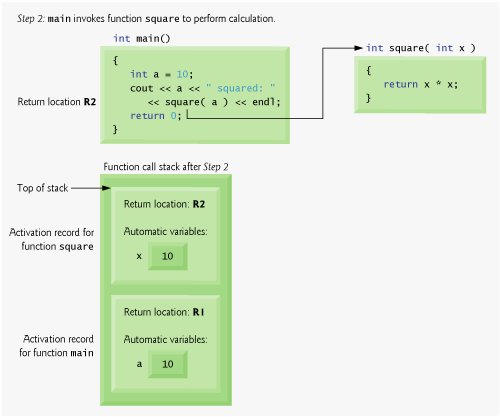 After square calculates the square of its argument, it needs to return to mainand no longer needs the memory for its automatic variable x. So the stack is poppedgiving square the return location in main (i.e., R2) and losing square's automatic variable. Figure 6.16 shows the function call stack after square's activation record has been popped.

(This item is displayed on page 272 in the print version) 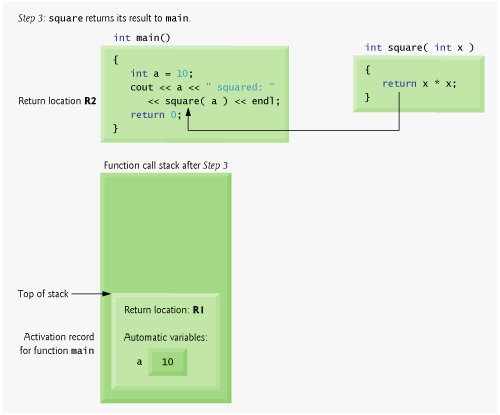 Function main now displays the result of calling square (line 15), then executes the return statement (line 16). This causes the activation record for main to be popped from the stack. This gives main the address it needs to return to the operating system (i.e., R1 in Fig. 6.14) and causes the memory for main's automatic variable (i.e., a) to become unavailable.

You have now seen how valuable the notion of the stack data structure is in implementing a key mechanism that supports program execution. Data structures have many important applications in computer science. We discuss stacks, queues, lists, trees and other data structures in Chapter 21, Data Structures, and Chapter 23, Standard Template Library (STL).