Base Classes and Derived Classes

Let us develop a simple inheritance hierarchy with five levels (represented by the UML class diagram in Fig. 12.2). A university community has thousands of members. 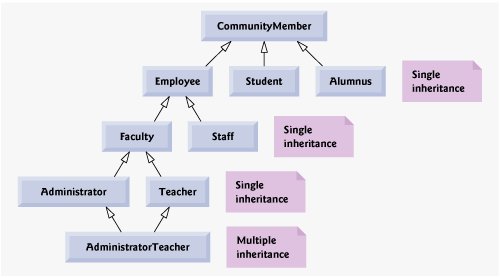 These members consist of employees, students and alumni. Employees are either faculty members or staff members. Faculty members are either administrators (such as deans and department chairpersons) or teachers. Some administrators, however, also teach classes. Note that we have used multiple inheritance to form class AdministratorTeacher. Also note that this inheritance hierarchy could contain many other classes. For example, students can be graduate or undergraduate students. Undergraduate students can be freshmen, sophomores, juniors and seniors.

Each arrow in the hierarchy (Fig. 12.2) represents an is-a relationship. For example, as we follow the arrows in this class hierarchy, we can state "an Employee is a CommunityMember" and "a Teacher is a Faculty member." CommunityMember is the direct base class of Employee, Student and Alumnus. In addition, CommunityMember is an indirect base class of all the other classes in the diagram. Starting from the bottom of the diagram, the reader can follow the arrows and apply the is-a relationship to the topmost base class. For example, an AdministratorTeacher is an Administrator, is a Faculty member, is an Employee and is a CommunityMember.

It is possible to treat base-class objects and derived-class objects similarly; their commonalities are expressed in the members of the base class. Objects of all classes derived from a common base class can be treated as objects of that base class (i.e., such objects have an is-a relationship with the base class). In Chapter 13, Object-Oriented Programming: Polymorphism, we consider many examples that take advantage of this relationship.