Figure 5.2. Counter-controlled repetition with the for statement.

(This item is displayed on page 189 in the print version)

Notice that Fig. 5.2 uses the loop-continuation condition counter <= 10. If the programmer incorrectly wrote counter < 10, then the loop would execute only 9 times. This is a common off-by-one error.

The general form of the for statement is

There is an exception to this rule, which we will discuss in Section 5.7.

The initialization, loop-continuation condition and increment expressions of a for statement can contain arithmetic expressions. For example, if x = 2 and y = 10, and x and y are not modified in the loop body, the for header

The "increment" of a for statement can be negative, in which case it is really a decrement and the loop actually counts downward (as shown in Section 5.4).

If the loop-continuation condition is initially false, the body of the for statement is not performed. Instead, execution proceeds with the statement following the for.

The for statement's UML activity diagram is similar to that of the while statement (Fig. 4.6). Figure 5.4 shows the activity diagram of the for statement in Fig. 5.2. The diagram makes it clear that initialization occurs once before the loop-continuation test is evaluated the first time, and that incrementing occurs each time through the loop after the body statement executes. Note that (besides an initial state, transition arrows, a merge, a final state and several notes) the diagram contains only action states and a decision. Imagine, again, that the programmer has a bin of empty for statement UML activity diagramsas many as the programmer might need to stack and nest with the activity diagrams of other control statements to form a structured implementation of an algorithm. The programmer fills in the action states and decision symbols with action expressions and guard conditions appropriate to the algorithm.

Figure 5.4. UML activity diagram for the for statement in Fig. 5.2.

(This item is displayed on page 192 in the print version) 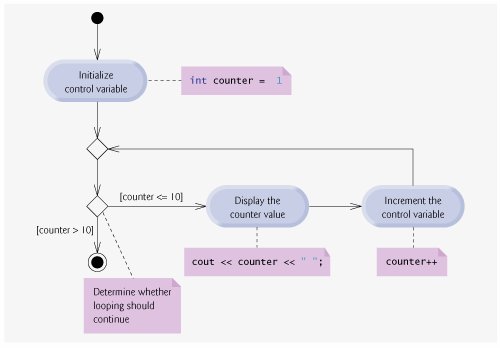