The Fibonacci series can be defined recursively as follows:

The program of Fig. 6.30 calculates the nth Fibonacci number recursively by using function fibonacci. Notice that Fibonacci numbers also tend to become large quickly, although slower than factorials do. Therefore, we chose the data type unsigned long for the parameter type and the return type in function fibonacci. Figure 6.30 shows the execution of the program, which displays the Fibonacci values for several numbers.

(This item is displayed on page 293 in the print version)

The application begins with a for statement that calculates and displays the Fibonacci values for the integers 010 and is followed by three calls to calculate the Fibonacci values of the integers 20, 30 and 35 (lines 1820). The calls to fibonacci (lines 15, 18, 19 and 20) from main are not recursive calls, but the calls from line 30 of fibonacci are recursive. Each time the program invokes fibonacci (lines 2531), the function immediately tests the base case to determine whether number is equal to 0 or 1 (line 27). If this is true, line 28 returns number. Interestingly, if number is greater than 1, the recursion step (line 30) generates two recursive calls, each for a slightly smaller problem than the original call to fibonacci. Figure 6.31 shows how function fibonacci would evaluate fibonacci( 3 ).

(This item is displayed on page 294 in the print version) 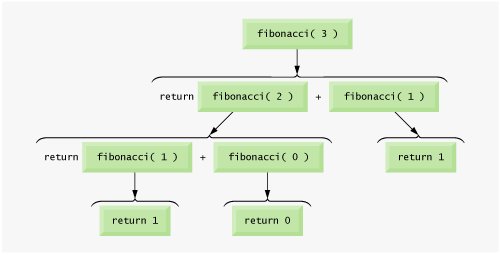 Most programmers simply assume that the operands are evaluated left to right. The C++ language does not specify the order in which the operands of most operators (including +) are to be evaluated. Therefore, the programmer must make no assumption about the order in which these calls execute. The calls could in fact execute fibonacci( 2 ) first, then fibonacci( 1 ), or they could execute in the reverse order: fibonacci( 1 ), then fibonacci( 2 ). In this program and in most others, it turns out that the final result would be the same. However, in some programs the evaluation of an operand can have side effects (changes to data values) that could affect the final result of the expression.