Most programs perform arithmetic calculations. Figure 2.9 summarizes the C++ arithmetic operators. Note the use of various special symbols not used in algebra. The asterisk (*) indicates multiplication and the percent sign (%) is the modulus operator that will be discussed shortly. The arithmetic operators in Fig. 2.9 are all binary operators, i.e., operators that take two operands. For example, the expression number1 + number2 contains the binary operator + and the two operands number1 and number2.

Arithmetic expressions in C++ must be entered into the computer in straight-line form. Thus, expressions such as "a divided by b" must be written as a / b, so that all constants, variables and operators appear in a straight line. The algebraic notation

is generally not acceptable to compilers, although some special-purpose software packages do exist that support more natural notation for complex mathematical expressions.

Parentheses are used in C++ expressions in the same manner as in algebraic expressions. For example, to multiply a times the quantity b + c we write a * (b + c).

C++ applies the operators in arithmetic expressions in a precise sequence determined by the following rules of operator precedence, which are generally the same as those followed in algebra:

The set of rules of operator precedence defines the order in which C++ applies operators. When we say that certain operators are applied from left to right, we are referring to the associativity of the operators. For example, in the expression

the addition operators (+) associate from left to right, so a + b is calculated first, then c is added to that sum to determine the value of the whole expression. We will see that some operators associate from right to left. Figure 2.10 summarizes these rules of operator precedence. This table will be expanded as additional C++ operators are introduced. A complete precedence chart is included in Appendix A.

Now consider several expressions in light of the rules of operator precedence. Each example lists an algebraic expression and its C++ equivalent. The following is an example of an arithmetic mean (average) of five terms:

The circled numbers under the statement indicate the order in which C++ applies the operators. The multiplication, modulus and division are evaluated first in left-to-right order (i.e., they associate from left to right) because they have higher precedence than addition and subtraction. The addition and subtraction are applied next. These are also applied left to right. Then the assignment operator is applied.

Evaluation of a Second-Degree Polynomial

The circled numbers under the statement indicate the order in which C++ applies the operators. There is no arithmetic operator for exponentiation in C++, so we have represented x2 as x * x. We will soon discuss the standard library function pow ("power") that performs exponentiation. Because of some subtle issues related to the data types required by pow, we defer a detailed explanation of pow until Chapter 6.

Suppose variables a, b, c and x in the preceding second-degree polynomial are initialized as follows: a = 2, b = 3, c = 7 and x = 5. Figure 2.11 illustrates the order in which the operators are applied.

Figure 2.11. Order in which a second-degree polynomial is evaluated. 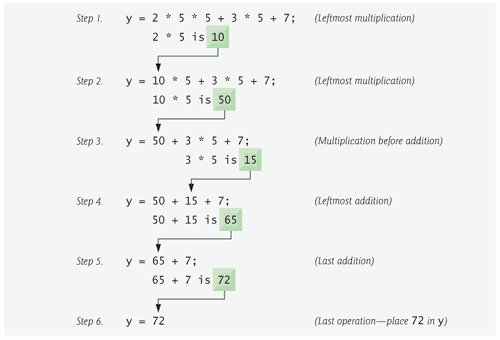 As in algebra, it is acceptable to place unnecessary parentheses in an expression to make the expression clearer. These are called redundant parentheses. For example, the preceding assignment statement could be parenthesized as follows: