Here $x, $y, and $z are all variablestemporary names to which values are then assigned (the $ in PHP indicates that these are variable names, and FileMaker 8, as you'll soon see, uses a similar convention for variable names). In later expressions, the variable names stand in for the values stored in them. So you'd expect that when the preceding program is run, the variable $z will end up storing a value of 16.

Often, as you build up a program or routine, you'll find yourself wanting to rely on named, temporary storage elements like these. In previous versions of FileMaker, the only place to cache such data has been within FileMaker's database structures, by putting the data into one or another kind of field.

Consider the simplistic example of a script that beeps 10 times in succession. Previously, you might have defined a field with global storage to act as a counter, and written the script like this:

This has always worked fine, but it has some drawbacks:

Global fields are still useful for many things in FileMaker 8, as you'll see, but they're not ideally suited to the kind of temporary named storage we need for something like a loop counter. This is where FileMaker 8's variables come to the forefront. FileMaker 8 script variables are defined within scripts, so they don't appear in the list of defined fields. And script variables can be truly temporary, coming into existence within a specific script and disappearing when the script completes.

A local variable is one that exists and has meaning only within a single script: exactly what you'd want for the loop counting example shown previously. If you were to rewrite the looping script using FileMaker 8 script variables, it might look like this:

Figure 15.5. The capability to set variables is a powerful new feature in FileMaker 8. 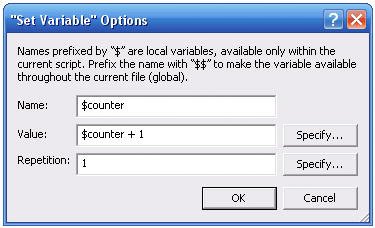 You'll notice that the Set Variable script step allows you to set the variable's value dynamically, using the Specify option. This means that a variable can be used to hold the results of any expression you can define using FileMaker's Calculation dialog. You could store the current username, the current date, or the results of an expression such as $counter + 1. You'll note also, by the way, that variables can be referenced from within such calculations just by using the variable name. For example, the following are perfectly valid calculation expressions:

You'll often hear computer-science types talking about the scope of a variable. It's a concept worth mastering. Scope can be defined as "that portion of a program for which a variable is defined or has meaning." Variables in FileMaker have one of two kinds of scope: either local scope or global scope.

So far, the variables we've examined have local scope. It's most common to refer to them as local variables. A local variable exists and has meaning only within the context of a single script. Consider the example of the $counter variable discussed previously. This variable exists only within the script in which it's defined and manipulated. After the script completes, the $counter variable in effect disappears. Likewise, if you called a subscript from within that script, the subscript would not have access to the value of $counter contained in the parent script.

So, to summarize what has been said about local variables in FileMaker 8:

Global variables also have scope only within a single file. There is no way to "reach across" to pull a global variable's data from one file into another. (Such a thing is, by contrast, possible with globally stored fields.) Global variables from other files cannot be accessed via relationships, because they don't appear in the field list.

So what good are global variables? When does it make sense to use them? We recommend that, by and large, you use global variables for user session data: data specific to one user that is intended to persist for just that user session. Examples include things like the name of the currently logged-in user, or user preferences such as a user's chosen default layout, or any other user-specific data you might be storing, such as a user's department or sales region.

We can't stress too strongly that this is not a good use for global variables! FileMaker 8 provides a set of what we call script (input/output) capabilities that let you pass data into scripts, and now, in FileMaker 8, return results from scripts. If you simply need to move data from one script to another, script parameters and script results (discussed in the preceding section of this chapter) are the best way to accomplish that task. Using global storage, whether global variables or globally stored fields, for general data transfer between scripts will make your programs more fragile and less maintainable. Global storage, by definition, can be accessed from anywhere, so you can never quite be sure that you know where your data is coming from; it might have been modified by scripts other than those with which you're trying to communicate, perhaps even by accident.

In the dialog box example discussed previously, we chose to return the user's choice as a script result, rather than tossing it into a global variable. Using script results, we were able to avoid creating any temporary storage along the way.

Other Ways to Work with Variables

Variables in FileMaker 8 can be used in quite complex ways. When you're first starting out with variables, we recommend you try to stick to the following precepts until you feel you've mastered the basics:

Now that we've said all of that, if you have mastered the basic concepts of variables, there are some advanced points to be made about them. If you feel you're ready, read on!

This one-liner may appear puzzling at first. It simply takes whatever script parameter was passed in, uses Evaluate on it, and returns the result.

Now suppose that this script, living in file A, is called from file B with a parameter of "$$currentUserName" (quotes included!). The Evaluate function will evaluate the string "$$currentUserName", so if a global variable of that name exists in file A, Evaluate will return the value of that variable. This value in turn gets passed out of the script as a script result, and is returned to the calling function in file B.

The principal drawback to this technique is that it's scripted, so it doesn't give a means to access variables in other files in such a way that they could be used in calculation expressions. It's a highly specialized technique, but might come in handy from time to time.

Accessing Variables from Within a Let Statement

If our editors had offered us a way to put a big yellow flag over an entire section, to signal "Caution! Slow Down! Dangerous Curves Ahead!" we would probably have applied it to this section. You may work with variables for a while before you need to delve into these techniques, but because the capability does exist in FileMaker 8, we discuss it here for completeness.

In this example, we are only reading the value of $$currentUserName. But it's also possible to set the value of a variable from within the variables block of a Let statement, like this:

This operation will actually set the value of $$currentUserName, and because this is a global variable, the value of the variable will persist even beyond the bounds of the Let statement!

The same considerations apply to local variables (those denoted with a single $); they can be read from within a Let statement, and can be set or reset within the variable block of a Let statement.

The capability of reading and writing script variables from within a Let statement is intriguing, but we would argue that this technique is best used with caution, and only when you're certain that there's no better or equally practical way to accomplish your goals. There are actually several scenarios here, and each is slightly different:

The story is different, though, for Let statements within calculations that are defined on the fly within scripts, such as those you might enter in the Specify box of many script steps. These are transient, script-only formulas that it may make sense to bind closely to the script by referencing script variables.

There's another nice feature of variables in FileMaker 8 that's very much worth mentioning. Certain script steps, such as Export Records, as well as the new Save Records as Excel/PDF script step, allow you to specify the location of an output file by typing in a file reference. In FileMaker 8, that file reference may be taken from a variable, rather than being hard-coded.

If the usefulness of that isn't obvious, let it sink in for a moment. In the past, it hasn't been possible to create names for exported files on the fly: You either had to let the user enter a filename, or had to hard-code a single specific filename into the script step. If you wanted to name exported or saved files dynamically (say you wanted to include the current date in the filename), you were out of luck, unless you chose to use a third-party plug-in.

To save files to a dynamically specified file path, you'll need to create that file path in your script and put it into a variable. That variable can then be used in specifying a file path, as the following script example illustrates:

This script example uses no fewer than three new FileMaker 8 features: script variables, the capability to use script variables for dynamic file paths, and one of FileMaker 8's several new Get() functions, Get(FileMakerPath).Get(FileMakerPath) will return the path to the FileMaker application directory. This function is part of a family of new path functions in FileMaker 8 that also includes Get(DesktopPath), Get(DocumentPath), Get(PreferencesPath), and Get(SystemDrive). By using this suite of new functions, along with the new dynamic file path capability, you should now be able to save files with custom filenames to a wide variety of locations on a user's disk.

One final note on variables in FileMaker 8. We've made the point a few times that variables are beneficial in that they don't add clutter to the database schema: They don't appear in Define Database dialog, nor in the field lists that go along with operations such as Sort or Import Records. There's a disadvantage to this as well: There's currently no way to see a list of all the variables that are currently active in a FileMaker solution.

It is possible to view the values of individual variables in the FileMaker Pro Advanced Data Viewer, but you must enter the variable names one at a time, as with any other expression.