In this section, we present the popular game Tic-Tac-Toe implemented by using client/server techniques with stream sockets. The program consists of a TicTacToeServer application (Fig. 24.13Fig. 24.14) that allows two TicTacToeClient applications (Fig. 24.15Fig. 24.16) to connect to the server and play Tic-Tac-Toe. Sample outputs are shown in Fig. 24.17.

(This item is displayed on page 1146 in the print version)

(This item is displayed on page 1153 in the print version) 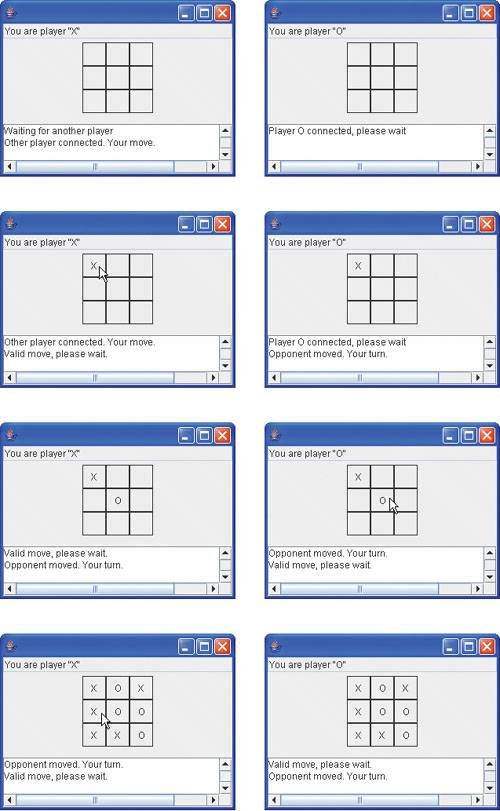 As the TicTacToeServer receives each client connection, it creates an instance of inner-class Player (lines 182301 of Fig. 24.13) to process the client in a separate thread. These threads enable the clients to play the game independently. The first client to connect to the server is player X and the second is player O. Player X makes the first move. The server maintains the information about the board so it can determine whether a player's move is valid or invalid.

We begin with a discussion of the server side of the Tic-Tac-Toe game. When the TicTacToeServer application executes, the main method (lines 712 of Fig. 24.14) creates a TicTacToeServer object called application. The constructor (lines 3469 of Fig. 24.13) attempts to set up a ServerSocket. If successful, the program displays the server window, then main invokes the TicTacToeServer method execute (lines 72100). Method execute loops twice, blocking at line 79 each time while waiting for a client connection. When a client connects, line 79 creates a new Player object to manage the connection as a separate thread, and line 80 executes the Player in the runGame thread pool.

When the TicTacToeServer creates a Player, the Player constructor (lines 192208) receives the Socket object representing the connection to the client and gets the associated input and output streams. Line 201 creates a Formatter (see Chapter 28) by wrapping it around the output stream of the socket. The Player's run method (lines 219297) controls the information that is sent to and received from the client. First, it passes to the client the character that the client will place on the board when a move is made (line 225). Line 226 calls Formatter method flush to force this output to the client. Line 241 suspends player X's thread as it starts executing, because player X can move only after player O connects.

After player O connects, the game can be played, and the run method begins executing its while statement (lines 264283). Each iteration of this loop reads an integer (line 269) representing the location where the client wants to place a mark, and line 272 invokes the TicTacToeServer method validateAndMove (declared at lines 118163) to check the move. If the move is valid, line 275 sends a message to the client to this effect. If not, line 280 sends a message indicating that the move was invalid. The program maintains board locations as numbers from 0 to 8 (0 through 2 for the first row, 3 through 5 for the second row and 6 through 8 for the third row).

Method validateAndMove (lines 118163 in class TicTacToeServer) allows only one player at a time to move, thereby preventing them from modifying the state information of the game simultaneously. If the Player attempting to validate a move is not the current player (i.e., the one allowed to make a move), it is placed in a wait state until its turn to move. If the position for the move being validated is already occupied on the board, validMove returns false. Otherwise, the server places a mark for the player in its local representation of the board (line 142), notifies the other Player object (line 146) that a move has been made (so that the client can be sent a message), invokes method signal (line 152) so that the waiting Player (if there is one) can validate a move and returns true (line 159) to indicate that the move is valid.