In this chapter, we overview several of Java's capabilities for drawing two-dimensional shapes, controlling colors and controlling fonts. One of Java's initial appeals was its support for graphics that enabled programmers to visually enhance their applications. Java now contains many more sophisticated drawing capabilities as part of the Java 2D™ API. This chapter begins with an introduction to many of Java's original drawing capabilities. Next we present several of the more powerful Java 2D capabilities, such as controlling the style of lines used to draw shapes and the way shapes are filled with color and patterns. [Note: Several concepts covered in this chapter have already been covered in the optional GUI and Graphics Case Study of Chapters 310. So, some material will be repetitive if you read the case study. You do not need to read the case study to understand this chapter.]

Figure 12.1. Classes and interfaces used in this chapter from Java's original graphics capabilities and from the Java 2D API. [Note: Class Object appears here because it is the superclass of the Java class hierarchy.]

(This item is displayed on page 597 in the print version) 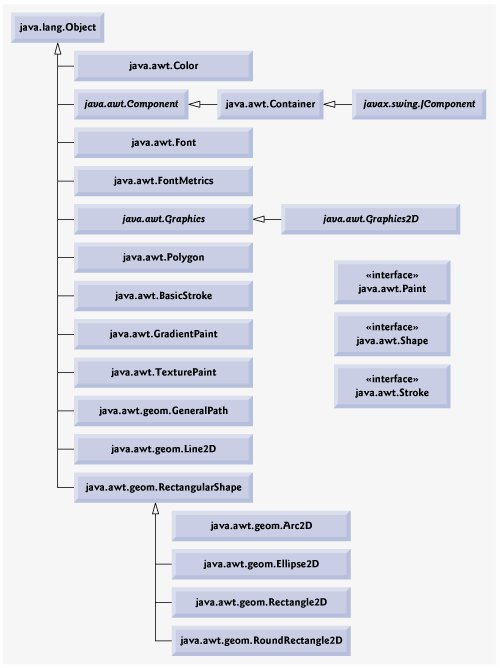 Text and shapes are displayed on the screen by specifying coordinates. The coordinates are used to indicate where graphics should be displayed on a screen. Coordinate units are measured in pixels. A pixel is a display monitor's smallest unit of resolution.