Now let's build an applet of our own. We begin with a simple applet (Fig. 20.6) that draws "Welcome to Java Programming!" on the applet. Figure 20.7 shows this applet executing in two applet containersthe appletviewer and the Microsoft Internet Explorer Web browser. At the end of this section, you will learn how to execute the applet in a Web browser.

Figure 20.6. Applet that draws a string.

(This item is displayed on page 965 in the print version)

(This item is displayed on page 965 in the print version) 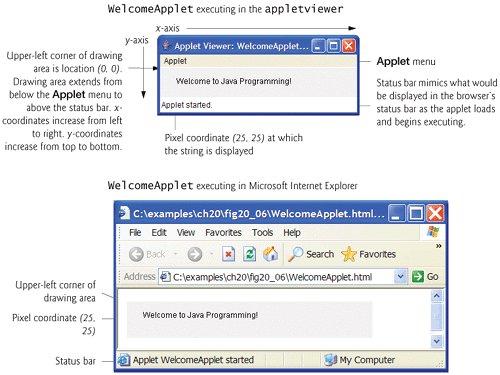 Line 3 imports class Graphics to enable the applet to draw graphics, such as lines, rectangles, ovals and strings of characters. Class JApplet (imported at line 4) from package javax.swing is used to create applets. As with applications, every Java applet contains at least one public class declaration. An applet container can create only objects of classes that are public and extend JApplet (or the Applet class from early versions of Java). For this reason, class WelcomeApplet (lines 617) extends JApplet.

An applet container expects every Java applet to have methods named init, start, paint, stop and destroy, each of which is declared in class JApplet. Each new applet class you create inherits default implementations of these methods from class JApplet. These methods can be overridden (redefined) to perform tasks that are specific to your applet. Section 20.4 discusses each of these methods in more detail.

When an applet container loads class WelcomeApplet, the container creates an object of type WelcomeApplet, then calls three of the applet's methods. In sequence, these three methods are init, start and paint. If you do not declare these methods in your applet, the applet container calls the inherited versions. The superclass methods init and start have empty bodies, so they do not perform any tasks. The superclass method paint does not draw anything on the applet.

You might wonder why it is necessary to inherit methods init, start and paint if their default implementations do not perform tasks. Some applets do not use all three of these methods. However, the applet container does not know that. Thus, it expects every applet to have these methods, so that it can provide a consistent start-up sequence for each applet. This is similar to applications' always starting execution with main. Inheriting the "default" versions of these methods guarantees that the applet container can execute each applet uniformly. Also, inheriting default implementations of these methods allows the programmer to concentrate on defining only the methods required for a particular applet.

To enable our applet to draw, class WelcomeApplet overrides method paint (lines 916) by placing statements in the body of paint that draw a message on the screen. Method paint receives a parameter of type Graphics (called g by convention), which is used to draw graphics on the applet. You do not call method paint explicitly in an applet. Rather, the applet container calls paint to tell the applet when to draw, and the applet container is responsible for passing a Graphics object as an argument.

Line 12 calls the superclass version of method paint that was inherited from JApplet. This statement should be the first statement in every applet's paint method. Omitting it can cause subtle drawing errors in applets that combine drawing and GUI components.

20.3.1. Executing an Applet in the appletviewer

Recall that applets are embedded in Web pages for execution in an applet container (appletviewer or a browser). Before you can execute the applet, you must create an HTML (HyperText Markup Language) document that specifies which applet to execute in the applet container. Typically, an HTML document ends with an ".html" or ".htm" file-name extension. Figure 20.8 shows a simple HTML documentWelcomeApplet.htmlthat loads the applet defined in Fig. 20.6 into an applet container. [Note: If you are interested in learning more about HTML, the CD that accompanies this book contains three chapters from our book Internet and World Wide Web How to Program, Third Edition that introduce the current version of HTML (known as XHTML) and the Web page formatting capability known as Cascading Style Sheets (CSS).]

The applet element has several attributes. The first attribute in line 2, code = "WelcomeApplet.class", indicates that the file WelcomeApplet.class contains the compiled applet class. The second and third attributes in line 2 indicate the width (300) and the height (45) of the applet in pixels. The tag (line 3) terminates the applet element that began at line 2. The tag (line 4) terminates the HTML document.

The appletviewer understands only the and HTML tags and ignores all other tags in the document. The appletviewer is an ideal place to test an applet and ensure that it executes properly. Once the applet's execution is verified, you can add its HTML tags to a Web page that others can view in their Web browsers.

To execute WelcomeApplet in the appletviewer, open a command window, change to the directory containing your applet and HTML document, then type

The sample program executions in Fig. 20.6 demonstrate WelcomeApplet executing in the appletviewer and in Microsoft Internet Explorer Web browser. To execute an applet in Internet Explorer, perform the following steps:

[Note: The steps for executing applets in other Web browsers are similar.]

If your applet executes in the appletviewer, but does not execute in your Web browser, Java may not be installed and configured for your browser. In this case, visit the Web site java.com and click the Get It Now button to install Java for your browser. In Internet Explorer, if this does not fix the problem, you might need to manually configure Internet Explorer to use J2SE 5.0. To do so, click the Tools menu and select Internet Options..., then click the Advanced tab in the window that appears. Locate the option "Use JRE v1.5.0 for(requires restart)" and ensure that it is checked, then click OK. Close all your browser windows before attempting to execute another applet in the browser.