First Program in Java: Printing a Line of Text

First Program in Java Printing a Line of Text

Every time you use a computer, you execute various applications that perform tasks for you. For example, your e-mail application helps you send and receive e-mail, and your Web browser lets you view Web pages from Web sites around the world. Computer programmers create such applications by writing computer programs.

A Java application is a computer program that executes when you use the java command to launch the Java Virtual Machine (JVM). Let us consider a simple application that displays a line of text. (Later in this section we will discuss how to compile and run an application.) The program and its output are shown in Fig. 2.1. The output appears in the light blue box at the end of the program. The program illustrates several important Java language features. Java uses notations that may look strange to nonprogrammers. In addition, for your convenience, each program we present in this book includes line numbers, which are not part of actual Java programs. We will soon see that line 9 does the real work of the programnamely, displaying the phrase Welcome to Java Programming! on the screen. We now consider each line of the program in order.

(This item is displayed on page 37 in the print version)

begins with //, indicating that the remainder of the line is a comment. Programmers insert comments to document programs and improve their readability. This helps other people to read and understand programs. The Java compiler ignores comments, so they do not cause the computer to perform any action when the program is run. We begin every program with a comment indicating the figure number and file name.

A comment that begins with // is called an end-of-line (or single-line) comment, because the comment terminates at the end of the line on which it appears. A // comment also can begin in the middle of a line and continue until the end of that line (as in lines 11 and 13).

is an end-of-line comment that describes the purpose of the program.

begins a class declaration for class Welcome1. Every program in Java consists of at least one class declaration that is defined by youthe programmer. These are known as programmer-defined classes or user-defined classes. The class keyword introduces a class declaration in Java and is immediately followed by the class name (Welcome1). Keywords (sometimes called reserved words) are reserved for use by Java (we discuss the various keywords throughout the text) and are always spelled with all lowercase letters. The complete list of Java keywords is shown in Appendix C.

By convention, all class names in Java begin with a capital letter and capitalize the first letter of each word they include (e.g., SampleClassName). A Java class name is an identifiera series of characters consisting of letters, digits, underscores (_) and dollar signs ($) that does not begin with a digit and does not contain spaces. Some valid identifiers are Welcome1, $value, _value, m_inputField1 and button7. The name 7button is not a valid identifier because it begins with a digit, and the name input field is not a valid identifier because it contains a space. Normally, an identifier that does not begin with a capital letter is not the name of a Java class. Java is case sensitivethat is, uppercase and lowercase letters are distinct, so a1 and A1 are different (but both valid) identifiers.

In Chapters 27, every class we define begins with the public keyword. For now, we will simply require this keyword. When you save your public class declaration in a file, the file name must be the class name followed by the ".java" file-name extension. For our application, the file name is Welcome1.java. You will learn more about public and non-public classes in Chapter 8.

is an end-of-line comment indicating the purpose of lines 711 of the program. Line 7

is the starting point of every Java application. The parentheses after the identifier main indicate that it is a program building block called a method. Java class declarations normally contain one or more methods. For a Java application, exactly one of the methods must be called main and must be defined as shown on line 7; otherwise, the JVM will not execute the application. Methods are able to perform tasks and return information when they complete their tasks. Keyword void indicates that this method will perform a task but will not return any information when it completes its task. Later, we will see that many methods return information when they complete their task. You will learn more about methods in Chapters 3 and 6. For now, simply mimic main's first line in your Java applications. In Line 7, the String args[] in parentheses is a required part of the method main's declaration. We discuss this in Chapter 7, Arrays.

The entire line 9, including System.out.println, the argument "Welcome to Java Programming!" in the parentheses and the semicolon (;), is called a statement. Each statement ends with a semicolon. When the statement on line 9 of our program executes, it displays the message Welcome to Java Programming! in the command window. As we will see in subsequent programs, a method is typically composed of one or more statements that perform the method's task.

specifies the closing right brace (}) of method main, and line 13

specifies the closing right brace (}) of class Welcome1. Each comment indicates the method or class that the right brace terminates.

We are now ready to compile and execute our program. For this purpose, we assume you are using the Sun Microsystems' J2SE Development Kit. On the Downloads page at our Web site (www.deitel.com), we provide Deitel® Dive Into™ Series publications to help you begin using several popular Java development tools.

To prepare to compile the program, open a command window and change to the directory where the program is stored. Most operating systems use the command cd to change directories. For example,

changes to the fig02_01 directory on Windows. The command

changes to the fig02_01 directory on UNIX/Linux/Max OS X.

To compile the program, type

If the program contains no syntax errors, the preceding command creates a new file called Welcome1.class (known as the class file for Welcome1) containing the Java bytecodes that represent our application. When we use the java command to execute the application, these bytecodes will be executed by the JVM.

Figure 2.2 shows the program of Fig. 2.1 executing in a Microsoft® Windows® XP Command Prompt window. To execute the program, type java Welcome1. This launches the JVM, which loads the ".class" file for class Welcome1. Note that the ".class" filename extension is omitted from the preceding command; otherwise, the JVM will not execute the program. The JVM calls method main. Next, the statement at line 9 of main displays "Welcome to Java Programming!" [Note: Many environments show command prompts with black backgrounds and white text. We adjusted these settings in our environment to make our screen captures more readable.] 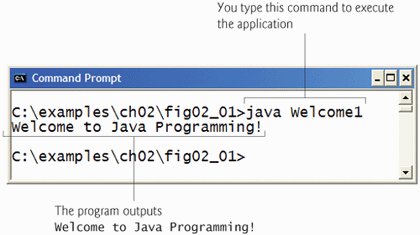