Abstract superclass Employee declares the "interface" to the hierarchythat is, the set of methods that a program can invoke on all Employee objects. We use the term "interface" here in a general sense to refer to the various ways programs can communicate with objects of any Employee subclass. Be careful not to confuse the general notion of an "interface" to something with the formal notion of a Java interface, the subject of Section 10.7. Each employee, regardless of the way his or her earnings are calculated, has a first name, a last name and a social security number, so private instance variables firstName, lastName and socialSecurityNumber appear in abstract superclass Employee.

The following sections implement the Employee class hierarchy. The first four sections each implement one of the concrete classes. The last section implements a test program that builds objects of all these classes and processes those objects polymorphically.

Class Employee (Fig. 10.4) provides methods earnings and toString, in addition to the get and set methods that manipulate Employee's instance variables. An earnings method certainly applies generically to all employees. But each earnings calculation depends on the employee's class. So we declare earnings as abstract in superclass Employee because a default implementation does not make sense for that methodthere is not enough information to determine what amount earnings should return. Each subclass overrides earnings with an appropriate implementation. To calculate an employee's earnings, the program assigns a reference to the employee's object to a superclass Employee variable, then invokes the earnings method on that variable. We maintain an array of Employee variables, each of which holds a reference to an Employee object (of course, there cannot be Employee objects because Employee is an abstract classbecause of inheritance, however, all objects of all subclasses of Employee may nevertheless be thought of as Employee objects). The program iterates through the array and calls method earnings for each Employee object. Java processes these method calls polymorphically. Including earnings as an abstract method in Employee forces every direct subclass of Employee to override earnings in order to become a concrete class. This enables the designer of the class hierarchy to demand that each subclass provide an appropriate pay calculation.

The diagram in Fig. 10.3 shows each of the five classes in the hierarchy down the left side and methods earnings and toString across the top. For each class, the diagram shows the desired results of each method. [Note: We do not list superclass Employee's get and set methods because they are not overridden in any of the subclasseseach of these methods is inherited and used "as is" by each of the subclasses.] 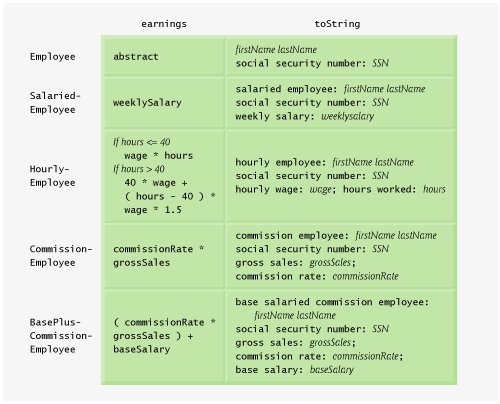 Why did we decide to declare earnings as an abstract method? It simply does not make sense to provide an implementation of this method in class Employee. We cannot calculate the earnings for a general Employeewe first must know the specific Employee type to determine the appropriate earnings calculation. By declaring this method abstract, we indicate that each concrete subclass must provide an appropriate earnings implementation and that a program will be able to use superclass Employee variables to invoke method earnings polymorphically for any type of Employee.

Class HourlyEmployee (Fig. 10.6) also extends class Employee (line 4). The class includes a constructor (lines 1016) that takes as arguments a first name, a last name, a social security number, an hourly wage and the number of hours worked. Lines 1922 and 3135 declare set methods that assign new values to instance variables wage and hours, respectively. Method setWage (lines 1922) ensures that wage is non-negative, and method setHours (lines 3135) ensures that hours is between 0 and 168 (the total number of hours in a week). Class HourlyEmployee also includes get methods (lines 2528 and 3841) to return the values of wage and hours, respectively; a method earnings (lines 4450) to calculate an HourlyEmployee's earnings; and a method toString (lines 5358), which returns the employee's type, namely, "hourly employee:" and employee-specific information. Note that the HourlyEmployee constructor, like the SalariedEmployee constructor, passes the first name, last name and social security number to the superclass Employee constructor (line 13) to initialize the private instance variables. In addition, method toString calls superclass method toString (line 56) to obtain the Employee-specific information (i.e., first name, last name and social security number)this is another nice example of code reuse.

(This item is displayed on page 477 in the print version)

To test our Employee hierarchy, the application in Fig. 10.9 creates an object of each of the four concrete classes SalariedEmployee, HourlyEmployee, CommissionEmployee and BasePlusCommissionEmployee. The program manipulates these objects, first via variables of each object's own type, then polymorphically, using an array of Employee variables. While processing the objects polymorphically, the program increases the base salary of each BasePlusCommissionEmployee by 10% (this, of course, requires determining the object's type at execution time). Finally, the program polymorphically determines and outputs the type of each object in the Employee array. Lines 918 create objects of each of the four concrete Employee subclasses. Lines 2230 output the string representation and earnings of each of these objects. Note that each object's toString method is called implicitly by printf when the object is output as a String with the %s format specifier.

Lines 4465 iterate through array employees and invoke methods toString and earnings with Employee variable currentEmployee, which is assigned the reference to a different Employee in the array during each iteration. The output illustrates that the appropriate methods for each class are indeed invoked. All calls to method toString and earnings are resolved at execution time, based on the type of the object to which currentEmployee refers. This process is known as dynamic binding or late binding. For example, line 46 implicitly invokes method toString of the object to which currentEmployee refers. As a result of dynamic binding, Java decides which class's toString method to call at execution time rather than at compile time. Please note that only the methods of class Employee can be called via an Employee variable (and Employee, of course, includes the methods of class Object). (Section 9.7 discusses the set of methods that all classes inherit from class Object.) A superclass reference can be used to invoke only methods of the superclass.

Lines 6364 invoke method earnings on currentEmployee, which calls the appropriate subclass object's earnings method polymorphically. Note that obtaining the earnings of the SalariedEmployee, HourlyEmployee and CommissionEmployee polymorphically in lines 6364 produces the same result as obtaining these employees' earnings individually in lines 2227. However, the earnings amount obtained for the BasePlusCommissionEmployee in lines 6364 is higher than that obtained in lines 2830, due to the 10% increase in its base salary.

Similarly, if lines 56, 57 and 60 used superclass variable currentEmployee, rather than subclass variable employee, to invoke subclass-only methods getBaseSalary and setBaseSalary, we would receive a "cannot find symbol" compilation error on each of these lines. Attempting to invoke subclass-only methods on a superclass reference is not allowed. While lines 56, 57 and 60 execute only if instanceof in line 49 returns true to indicate that currentEmployee has been assigned a reference to a BasePlusCommissionEmployee object, we cannot attempt to invoke subclass BasePlusCommissionEmployee methods getBaseSalary and setBaseSalary on superclass Employee reference currentEmployee. The compiler would generate errors on lines 56, 57 and 60, because getBaseSalary and setBaseSalary are not superclass methods and cannot be invoked on a superclass variable. Although the actual method that is called depends on the object's type at execution time, a variable can be used to invoke only those methods that are members of that variable's type, which the compiler verifies. Using a superclass Employee variable, we can invoke only methods found in class Employeeearnings, toString and Employee's get and set methods.

10.5.7. Summary of the Allowed Assignments Between Superclass and Subclass Variables