Figure 13.3 shows a small portion of the inheritance hierarchy for class Throwable (a subclass of Object), which is the superclass of class Exception. Only Throwable objects can be used with the exception-handling mechanism. Class Throwable has two subclasses: Exception and Error. Class Exception and its subclassesfor instance, RuntimeException (package java.lang) and IOException (package java.io)represent exceptional situations that can occur in a Java program and that can be caught by the application. Class Error and its subclasses (e.g., OutOfMemoryError) represent abnormal situations that could happen in the JVM. Errors happen infrequently and should not be caught by applicationsit is usually not possible for applications to recover from Errors. [Note: The Java exception hierarchy is enormous, containing hundreds of classes. Information about Java's exception classes can be found throughout the Java API. The documentation for class Throwable can be found at java.sun.com/j2se/5.0/docs/api/java/lang/Throwable.html. From there, you can look at this class's subclasses to get more information about Java's Exceptions and Errors.]

(This item is displayed on page 649 in the print version) 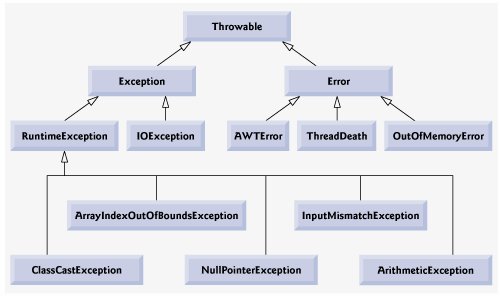 Various exception classes can be derived from a common superclass. If a catch handler is written to catch exception objects of a superclass type, it can also catch all objects of that class's subclasses. This enables a catch block to handle related errors with a concise notation and allows for polymorphic processing of related exceptions. One could certainly catch each subclass type individually if those exceptions required different processing. Of course, catching related exceptions in one catch block makes sense only if the handling behavior is the same for all subclasses.