A linked list is a linear collection (i.e., a sequence) of self-referential-class objects, called nodes, connected by reference linkshence, the term "linked" list. Typically, a program accesses a linked list via a reference to the first node in the list. The program accesses each subsequent node via the link reference stored in the previous node. By convention, the link reference in the last node is set to null to mark the end of the list. Data is stored in a linked list dynamicallythe program creates each node as necessary. A node can contain data of any type, including references to objects of other classes. Stacks and queues are also linear data structures and, as we will see, are constrained versions of linked lists. Trees are non-linear data structures.

Lists of data can be stored in arrays, but linked lists provide several advantages. A linked list is appropriate when the number of data elements to be represented in the data structure is unpredictable. Linked lists are dynamic, so the length of a list can increase or decrease as necessary. The size of a "conventional" Java array, however, cannot be altered, because the array size is fixed at the time the program creates the array. "Conventional" arrays can become full. Linked lists become full only when the system has insufficient memory to satisfy dynamic storage allocation requests. Package java.util contains class LinkedList for implementing and manipulating linked lists that grow and shrink during program execution. We discuss class LinkedList in Chapter 19.

Linked lists can be maintained in sorted order simply by inserting each new element at the proper point in the list. (It does, of course, take time to locate the proper insertion point.) Existing list elements do not need to be moved.

The program of Fig. 17.3Fig. 17.5 uses an object of our List class to manipulate a list of miscellaneous objects. The program consists of four classesListNode (Fig. 17.3, lines 637), List (Fig. 17.3, lines 40147), EmptyListException (Fig. 17.4) and ListTest (Fig. 17.5). The List, ListNode and EmptyListException classes are placed in package com.deitel.jhtp6.ch17, so they can be reused throughout this chapter. Encapsulated in each List object is a linked list of ListNode objects. [Note: Many of the classes in this chapter are declared in the package com.deitel.jhtp6.ch17. Each such class should be compiled with the -d command-line option to javac. When compiling the classes that are not in this package and when running the programs, be sure to use the - classpath option to javac and java, respectively.]

(This item is displayed on page 826 in the print version)

Class ListNode (Fig. 17.3, lines 637) declares package-access fields data and nextNode. The data field is an Object reference, so it can refer to any object. ListNode member nextNode stores a reference to the next ListNode object in the linked list (or null if the node is the last one in the list).

Lines 4243 of class List (Fig. 17.3, lines 40147) declare references to the first and last ListNodes in a List (firstNode and lastNode, respectively). The constructors (lines 4750 and 5357) initialize both references to null. The most important methods of class List are insertAtFront (lines 6066), insertAtBack (lines 6975), removeFromFront (lines 7892) and removeFromBack (lines 95118). Method isEmpty (lines 121124) is a predicate method that determines whether the list is empty (i.e., the reference to the first node of the list is null). Predicate methods typically test a condition and do not modify the object on which they are called. If the list is empty, method isEmpty returns TRue; otherwise, it returns false. Method print (lines 127146) displays the list's contents. A detailed discussion of List's methods follows Fig. 17.5.

Method main of class ListTest (Fig. 17.5) inserts objects at the beginning of the list using method insertAtFront, inserts objects at the end of the list using method insertAtBack, deletes objects from the front of the list using method removeFromFront and deletes objects from the end of the list using method removeFromBack. After each insert and remove operation, ListTest calls List method print to display the current list contents. If an attempt is made to remove an item from an empty list, an EmptyListException (Fig. 17.4) is thrown, so the method calls to removeFromFront and removeFromBack are placed in a try block that is followed by an appropriate exception handler. Notice in lines 13, 15, 17 and 19 that the applications passes literal primitive int values to methods insertAtFront and insertAtBack, even though each of these methods was declared with a parameter of type Object (Fig. 17.3, lines 60 and 69). In this case, the JVM autoboxes each literal value in an Integer object and that object is actually inserted into the list. This, of course, is allowed because Object is an indirect superclass of Integer.

Now we discuss each method of class List (Fig. 17.3) in detail and provide diagrams showing the reference manipulations performed by methods insertAtFront, insertAtBack, removeFromFront and removeFromBack. Method insertAtFront (lines 6066 of Fig. 17.3) places a new node at the front of the list. The steps are:

(This item is displayed on page 829 in the print version) 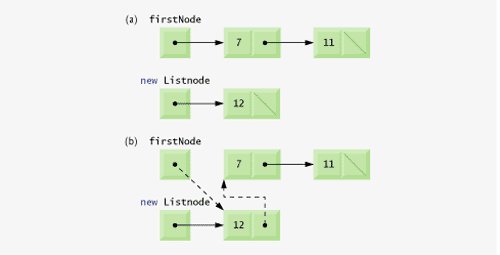 In Fig. 17.7, part (a) shows a list and a new node during the insertAtBack operation and before the program links the new node into the list. The dotted arrows in part (b) illustrate Step 3 of method insertAtBack, which adds the new node to the end of a list that is not empty. 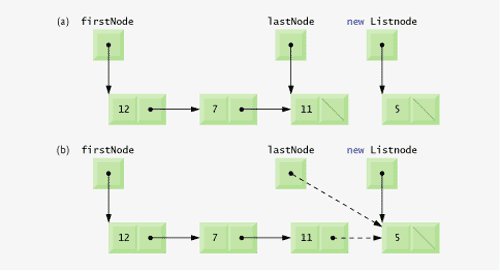 In Fig. 17.8, part (a) illustrates the list before the removal operation. The dashed lines and arrows in part (b) show the reference manipulations. 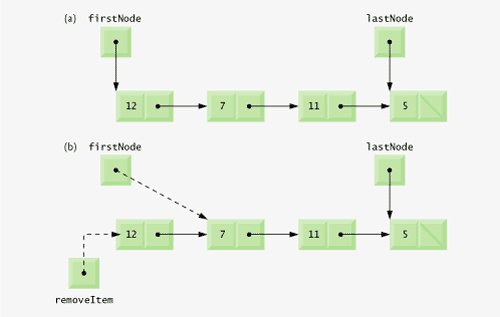 Method removeFromBack (lines 95118 of Fig. 17.3) removes the last node of a list and returns a reference to the removed data. The method throws an EmptyListException (lines 9798) if the list is empty when the program calls this method. The steps are:

In Fig. 17.9, part (a) illustrates the list before the removal operation. The dashed lines and arrows in part (b) show the reference manipulations. 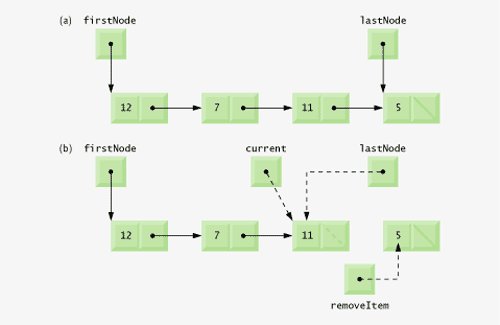 Method print (lines 127146) first determines whether the list is empty (lines 129133). If so, print displays a message indicating that the list is empty and returns control to the calling method. Otherwise, print outputs the list's data. Line 136 creates ListNode current and initializes it with firstNode. While current is not null, there are more items in the list. Therefore, line 141 outputs a string representation of current.data. Line 142 moves to the next node in the list by assigning the value of reference current.nextNode to current. This printing algorithm is identical for linked lists, stacks and queues.