Sample Applets Provided with the JDK

Let's consider several demonstration applets provided with the JDK. Each sample applet comes with its source code. Some programmers find it interesting to read this source code to learn new and exciting Java features.

The demonstration programs provided with the JDK are located in a directory called demo. For Windows, the default location of the JDK 5.0's demo directory is

On UNIX/Linux/Mac OS X, the default location is the directory in which you install the JDK followed by jdk1.5.0/demofor example,

For other platforms, there will be a similar directory (or folder) structure. This chapter assumes that the JDK is installed in C:Program FilesJavajdk1.5.0demo on Windows or in your home directory in ~/jdk1.5.0 on UNIX/Linux/Max OS X. You may need to update the locations specified here to reflect your chosen installation directory and disk drive, or a different version of the JDK.

If you are using a Java development tool that does not come with the Sun Java demos, you can download the JDK (with the demos) from the Sun Microsystems Java Web site

The TicTacToe demonstration applet allows you to play Tic-Tac-Toe against the computer. To execute this applet, open a command window and change directories to the JDK's demo directory.

Change directories to the applets directory and list its contents to see the directory names for the demonstration applets. Figure 20.1 provides a brief description of each sample applet. If your browser supports J2SE 5.0, you can test these applets by opening the site java.sun.com/j2se/5.0/docs/relnotes/demos.html in your browser and clicking the link to each applet. We will demonstrate three of these applets by using the appletviewer command in a command window.

Change directories to subdirectory TicTacToe, where you will find the HTML document example1.html that is used to execute the applet. In the command window, type the command

(This item is displayed on page 962 in the print version)

Figure 20.3. Applet menu in the appletviewer. 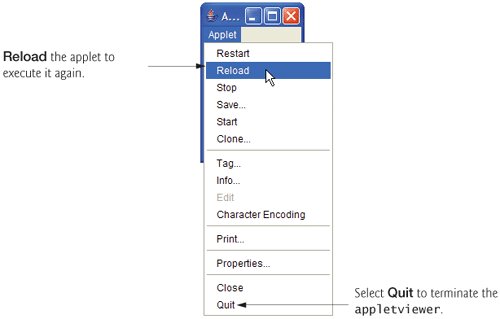 and press Enter. The appletviewer loads example1.html, determines from the document which applet to load and executes the applet. Figure 20.4 shows a screen capture after some lines and points have been drawn.

(This item is displayed on page 963 in the print version) 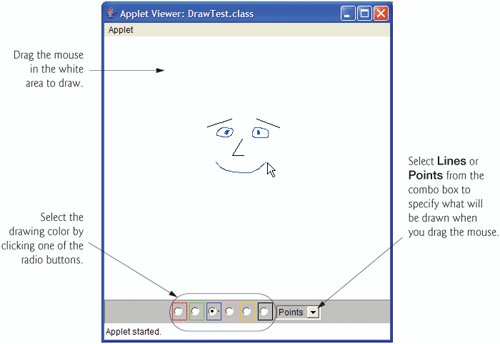 Select a color by clicking one of the radio buttons at the bottom of the applet. You can select from red, green, blue, pink, orange and black. Change the shape to draw from Lines to Points by selecting Points from the combo box. To start a new drawing, select Reload from the appletviewer's Applet menu.

The Java2D applet demonstrates many features of the Java 2D API (which we introduced in Chapter 12). Change directories to the jfc directory in the JDK's demo directory, then change to the Java2D directory. In the command window, type the command

and press Enter. The appletviewer loads Java2Demo.html, determines from the document which applet to load and executes the applet. Figure 20.5 shows a screen capture of one of this applet's many demonstrations of Java's two-dimensional graphics capabilities.

(This item is displayed on page 964 in the print version) 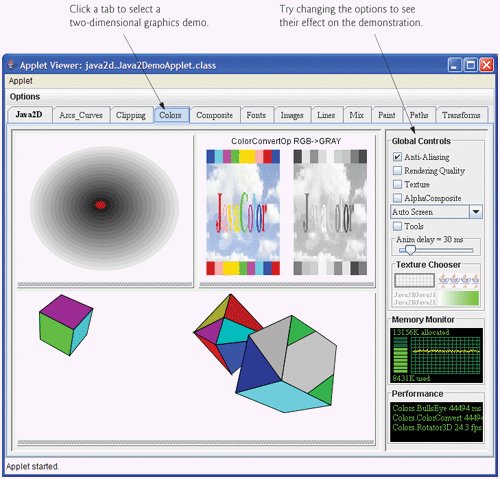 At the top of the applet are tabs that look like file folders in a filing cabinet. This demo provides 12 tabs with Java 2D API features demonstrated on each tab. To change to a different part of the demo, simply click a different tab. Also, try changing the options in the upper-right corner of the applet. Some of these affect the speed with which the applet draws the graphics. For example, click the checkbox to the left of the word Anti-Aliasing to turn off anti-aliasing (a graphics technique for producing smoother on-screen graphics in which the edges of the graphic are blurred). When this feature is turned off, the animation speed increases for the animated shapes at the bottom of the demo (Fig. 20.5). This performance increase occurs because shapes that are not anti-aliased are less complex to draw.