We discussed the if single-selection statement and the if...else double-selectionstatement in Chapter 4. Java provides the switch multiple-selection statement to perform different actions based on the possible values of an integer variable or expression. Each action. is associated with the value of a constant integral expression (i.e., a constant value of type byte, short, int or char, but not long) that the variable or expression on which the switch is based may assume.

Figure 5.9 contains an enhanced version of the GradeBook class introduced in Chapter 3 and further developed in Chapter 4. The version of the class we now present not only calculates the average of a set of numeric grades entered by the user, but uses a switch statement to determine whether each grade is the equivalent of an A, B, C, D or F and to increment the appropriate grade counter. The class also displays a summary of the number of students who received each grade. Please refer to Fig. 5.10 for sample input and output of the GradeBook-Test application that uses class GradeBook to process a set of grades.

Figure 5.10. GradeBookTest creates a GradeBook object and invokes its methods.

(This item is displayed on page 198 in the print version)

On UNIX/Linux/Mac OS X systems, end-of-file is entered by typing the sequence

on a line by itself. This notation means to simultaneously press both the ctrl key and the d key. On Windows systems, end-of-file can be entered by typing

[Note: On some systems, you must press Enter after typing the end-of-file key sequence. Also, Windows typically displays the characters ^Z on the screen when the end-of-file indicator is typed, as is shown in the output of Fig. 5.9]

The while statement (lines 5765) obtains the user input. The condition at line 57 calls Scanner method hasNext to determine whether there is more data to input. This method returns the boolean value TRue if there is more data; otherwise, it returns false. The returned value is then used as the condition in the while statement. As long as the end-of-file indicator has not been typed, method hasNext will return TRue.

Line 59 inputs a grade value from the user. Line 60 uses the += operator to add grade to total. Line 61 increments gradeCounter. The class's displayGradeReport method uses these variables to compute the average of the grades. Line 64 calls the class's incrementLetterGradeCounter method (declared in lines 6995) to increment the appropriate letter-grade counter based on the numeric grade entered.

When the flow of control reaches the switch, the program evaluates the expression in the parentheses (grade / 10) following keyword switch. This is called the controlling expression of the switch. The program compares the value of the controlling expression (which must evaluate to an integral value of type byte, char, short or int) with each case label. The controlling expression in line 72 performs integer division, which truncates the fractional part of the result. Thus, when we divide any value for 0100 by 10, the result is always a value from 0 to 10.We use several of these values in our case labels. For example, if the user enters the integer 85, the controlling expression evaluates to the int value 8. The switch compares 8 with each case. If a match occurs (case 8: at line 79), the program executes the statements for that case. For the integer 8, line 80 increments bCount, because a grade in the 80s is a B. The break statement (line 81) causes program control to proceed with the first statement after the switchin this program, we reach the end of method incrementLetterGradeCounter's body, so control returns to line 65 in method inputGrades (the first line after the call to incrementLetterGradeCounter). This line marks the end of the body of the while loop that inputs grades (lines 5765), so control flows to the while's condition (line 57) to determine whether the loop should continue executing.

The cases in our switch explicitly test for the values 10, 9, 8, 7 and 6. Note the cases at lines 7475 that test for the values 9 and 10 (both of which represent the grade A). Listing cases consecutively in this manner with no statements between them enables the cases to perform the same set of statementswhen the controlling expression evaluates to 9 or 10, the statements in lines 7677 will execute. The switch statement does not provide a mechanism for testing ranges of values, so every value that must be tested should be listed in a separate case label. Note that each case can have multiple statements. The switch statement differs from other control statements in that it does not require braces around multiple statements in each case.

Class GradeBookTest (Fig. 5.10) creates a GradeBook object (lines 1011). Line 13 invokes the object's displayMessage method to output a welcome message to the user. Line 14 invokes the object's inputGrades method to read a set of grades from the user and keep track of the sum of all the grades entered and the number of grades. Recall that method inputGrades also calls method incrementLetterGradeCounter to keep track of the number of students who received each letter grade. Line 15 invokes method displayGradeReport of class GradeBook, which outputs a report based on the grades entered (as in the input/output window in Fig. 5.10). Line 103 of class GradeBook (Fig. 5.9) determines whether the user entered at least one gradethis helps us avoid dividing by zero. If so, line 106 calculates the average of the grades. Lines 109118 then output the total of all the grades, the class average and the number of students who received each letter grade. If no grades were entered, line 121 outputs an appropriate message. The output in Fig. 5.10 shows a sample grade report based on 10 grades.

Note that class GradeBookTest (Fig. 5.10) does not directly call GradeBook method incrementLetterGradeCounter (lines 6995 of Fig. 5.9). This method is used exclusively by method inputGrades of class GradeBook to update the appropriate letter-grade counter as each new grade is entered by the user. Method incrementLetterGradeCounter exists solely to support the operations of class GradeBook's other methods and thus could be declared private. Recall from Chapter 3 that methods declared with access modifier private can be called only by other methods of the class in which the private methods are declared. Such methods are commonly referred to as utility methods or helper methods because they can be called only by other methods of that class and are used to support the operation of those methods. 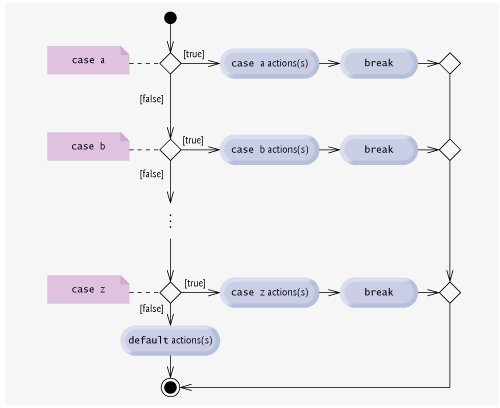 The break statement is not required for the switch's last case (or the default case, when it appears last), because execution continues with the next statement after the switch.

The expression in each case also can be a constant variablea variable that contains a value which does not change for the entire program. Such a variable is declared with keyword final (discussed in Chapter 6, Methods: A Deeper Look). J2SE 5.0 has a new feature called enumerations, which we also present in Chapter 6. Enumeration constants can also be used in case labels. In Chapter 10, Object-Oriented Programming: Polymorphism, we present a more elegant way to implement switch logicwe use a technique called polymorphism to create programs that are often clearer, easier to maintain and easier to extend than programs using switch logic.