[Note: These constants (MAX_PRIORITY, MIN_PRIORITY and NORM_PRIORITY) are declared in the Thread class. It is recommended that you do not explicitly create and use Thread objects to implement concurrency, but rather use the Runnable interface (which is described in Section 23.4). The THRead class does contain some static methods that are useful, as you will see later in this chapter.]

The job of an operating system's thread scheduler is to determine which thread runs next. One simple implementation of the thread scheduler keeps the highest-priority thread running at all times and, if there is more than one highest-priority thread, ensures that all such threads execute for a quantum each in round-robin fashion. Figure 23.3 illustrates a multi-level priority queue for threads. In the figure, assuming a single-processor computer, threads A and B each execute for a quantum in round-robin fashion until both threads complete execution. This means that A gets a quantum of time to run. Then B gets a quantum. Then A gets another quantum. Then B gets another quantum. This continues until one thread completes. The processor then devotes all its power to the thread that remains (unless another thread of that priority becomes ready). Next, thread C runs to completion (assuming that no higher-priority threads arrive). Threads D, E and F each execute for a quantum in round-robin fashion until they all complete execution (again assuming that no higher-priority threads arrive). This process continues until all threads run to completion.

(This item is displayed on page 1058 in the print version) 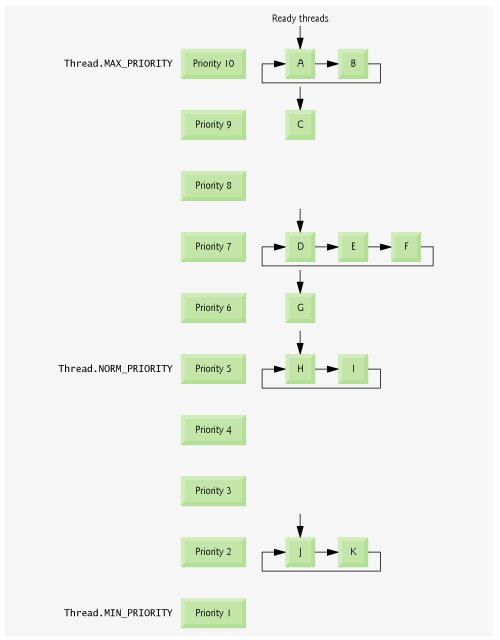 J2SE 5.0 provides higher-level concurrency utilities to hide some complexity and make multithreaded programs less error prone (though they are still certainly complex). Thread priorities are still used behind the scenes to interact with the operating system, but most programmers who use J2SE 5.0 multithreading will not be concerned with setting and adjusting thread priorities. You can learn more about priorities and threading at java.sun.com/j2se/5.0/docs/api/java/lang/Thread.html.