As the depth and breadth of business intelligence (BI) platforms like Crystal Enterprise grow within organizations today, one of the key challenges is the interoperability of the core BI platform with the rest of the surrounding infrastructure. There are many services that the BI platform might need to work with such as ETL tools, databases/data warehouses, Web servers, portal servers, and security and directory servers. One of the ways that Crystal Enterprise can work with these external technologies is through Program Objects.

A Program Object is a small program or link to a program published as a standard object to Crystal Enterprise. It has its own name, location in the folder structure, security permission, and all the other attributes youd expect from a standard Crystal Enterprise object. From a programmatic perspective, it is represented by an InfoObject. Generally Program Objects are only scheduled, not viewed on-demand. They are processed by the Program Job Server instead of the Report Job Server. Figure 36.4 shows creating a Program Object from the Crystal Management Console. 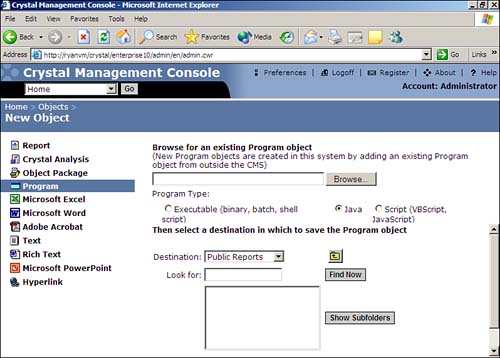 There are three types of programs that can be run via a Program Object: an executable, a script file, or a Java program. When creating a Program Object, you simply point to the location of the file. When creating the scheduled job, you can specify arguments to the program. The types of executable files supported are .exe, .bat, and .sh. The types of script files supported are .vbs and .js. The more interesting type of Program Object is a Java program. To write a Java program that can be scheduled within Crystal Enterprise, you must implement the IProgramBase interface found in the com.crystaldecisions.sdk.plugin. desktop.program package. This interface only has a single method called run. It receives as arguments to the method: a valid IEnterpriseSession, a valid IInfoStore, and a String array consisting of the programs arguments as defined at schedule time. This is useful because you can use these objects to gain access to Crystal Enterprise without having to pass in credentials. Listing 36.1 provides an example Java Program Object that when scheduled, accepts a username as an argument and deletes all object instances that are owned by that user (in other words, all the objects that the user scheduled).


Because a Java Program Object needs to implement an interface defined in the Crystal Enterprise Java libraries, you need to include those libraries in the classpath when compiling the program. The specific files you need to reference are

These and the rest of the Crystal Enterprise Java libraries can be found in the following directory:

Figure 36.5 shows the output of scheduling the DeleteInstances Java Program Object and passing in Administrator as the username to delete instances for.

Figure 36.5. The output of the DeleteInstances scheduled job.

There are many uses for Java Program Objects. Because the implementation for the program is defined by the developer the only limits are the creativity in which it is used. Some typical examples of Program Objects are