Figure 30.1. Here a report is shown being editing in the Visual Basic report designer. 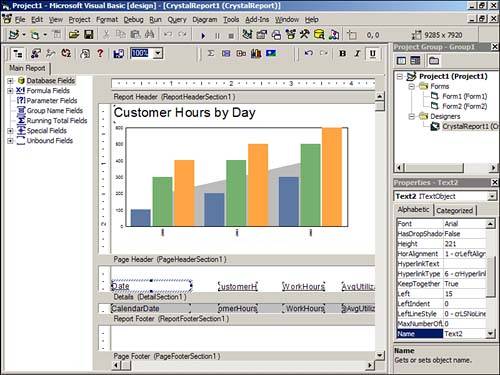 To add a new report to a project, select Add Crystal Reports 10 from the Project menu inside Visual Basic.

The Visual Basic report designer supports almost all the features of the Crystal Reports designer and can be used to create everything from simple tabular reports to highly formatted, professional reports. However, even though the capabilities of these two editions are similar, there are some differences in the way the designer works. This is not meant to be inconsistent, but rather to adapt some of the Crystal Reports tasks to tasks with which Visual Basic developers are familiar. Ideally, the experience of designing a report with the Visual Basic report designer should be like designing a Visual Basic form. The following sections cover these differences.

Several user interface components work differently in the Visual Basic report designer. One of the first things you might notice is that the section names are shown above each section on a section band as opposed to being on the left side of the window. However, the same options are available when right-clicking on the section band. This tends to be more convenient anyway.

The Field Explorer resides to the left of the report page. Although it cannot be docked, it can be shown or hidden by clicking the Toggle Field View button on the designer toolbar. Other Explorer windows found in the standalone designer such as the Report Explorer and Repository Explorer are not available in the Visual Basic report designer.

Reports that contain objects linked to the Crystal Repository are fully supported; however, no new repository objects can be added to the report without using the standalone designer.

The menus that you would normally find in the standalone Crystal Reports designer can be found by right-clicking on an empty spot on the designer surface. The pop-up menu provides the same functionality.

To change the formatting and settings for report objects in the standalone designer, users are familiar with right-clicking on a report object and selecting Format Field from the pop-up menu. This opens the Format Editor, which gives access to changing the font, color, style, and other formatting options. In the Visual Basic report designer this scenario is still available; however, there is an additional way to apply most of these formatting options: the Property Browser.

The Property Browser is a window that lives inside of the Visual Basic development environment. It should be very familiar to Visual Basic developers as a way to change the appearance and behavior of a selected object on a form or design surface. In the context of the report designer, the Property Browser is another way to change the settings (properties) for report objects. In general, any setting that is available in the Format Editor dialog is available from the property browser when that object is selected. To see which properties are available for a given object, click on it, and check out the Property Browser window shown in Figure 30.2.

Figure 30.2. Changing a report objects settings via the Property Browser is shown here. 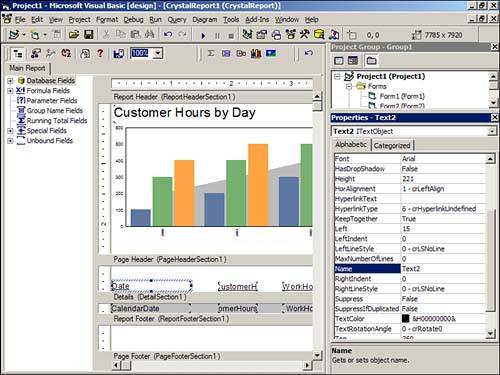 One property to pay attention to is the Name property. This becomes relevant in the next section when you learn how to use the Report Engine Object Model to manipulate the report on the fly at runtime. This is the way to reference that object in code. Also of note is that the properties shown in the Property Browser map to the same properties that are available programmatically via the object model. If you see a property there, this means it is also available to be changed dynamically at runtime.

The Field Explorer in the Visual Basic report designer has an extra type field not found in the standalone report designer. These are called unbound fields. There is one type of unbound field for each data type. These fields are used to build dynamic reports. Because they do not have a predefined database field mapped to them, they provide a way to change the locations of fields on the report by using some application logic. The reason they each have their own data type is so that type-specific formatting can be applied such as the year format for a date object, or the thousands separator for a numeric object. Unbound fields are revisited later in this chapter.