Figure 3.48 illustrates the data waveforms produces by a sophisticated and highly adaptable equalization scheme first introduced for 5 Gb/s point-to-point pcb applications by Accelerant Networks. This system uses PAM-4 data coding, meaning that at each transition the transmitter sends one of four discrete levels. In that way it communicates two bits of information to the receiver on each transition.

Figure 3.48. At startup (without equalization) the received data eye is closed. After automatic convergence the transmitter pre-distorts (equalizes) the transmitted PAM-4 signal so that the received signal is easily recovered. Figure courtesy of Accelerant Networks, manufacturer of digital adaptive transceivers for communication at 5 Gb/s and beyond . 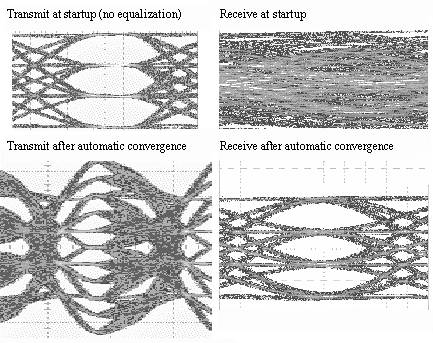 Because the amount of information conveyed per transition is twice that in ordinary binary signaling, PAM-4 coding reduces the number of transitions required by a factor of approximately two, thus halving the bandwidth of the data stream. [35] The reduction in bandwidth allows a system using the Accelerant transceiver to accommodate stubs, connector artifacts, layout imperfections, and other packaging flaws physically twice as large as would be permitted in a binary system operating at the same overall bit rate.

In addition to the use of PAM-4, the Accelerant transceiver incorporates an adaptive transmit-based equalizer. The equalizer is automatically tuned based on measurements taken at each receiver, which are communicated back to that receiver's local transmitter using a hidden control channel superimposed on the reverse data channel. This scheme assumes the user has implemented a symmetrical duplex link with one differential pair running in each direction.

During start-up, a reliable low-frequency code initiates the equalization sequence. After start-up, a continuous flow of control information passes between the transceivers, keeping both ends of the link properly adapted to changes in the transmission properties of the channel. This allows the system to respond to changes in temperature (see Section 5.1.3.5, "Variations in Dielectric Properties with Temperature").

This code successfully operates on ordinary FR-4 differential pairs at distances up to 30 inches or more, traversing multiple connectors.

The top-left portion of Figure 3.48 shows a PAM-4 transmit signal with no pre-distortion (no equalization). On the top right the received signal after an aggregate 30 inches of FR-4 trace, composed of two paddle cards, two connectors, and a backplane, is barely perceptible as a mushy, closed eye.

The bottom-left portion of the figure shows the same PAM-4 transmit signal, but with pre-distortion (equalization) after the link has converged . On the bottom right the received signal after the same 30 inches of FR-4 trace is easily recovered. Adaptive equalization works wonders.

Appendix B. Calculation of Loss Slope