There are three types of dashes and they all serve different functions.

The hyphen is the shortest dash. It is meant only for hyphenating words or creating line breaks, but is commonly misused by people who don't know about en dashes and em dashes. (See Chapter 11: "Don't Fear the Hyphen" for information on discretionary hyphens.)

The en dash is used with a range of numbers. The rule of thumb is that if, when speaking the words, you would say "to" then use an en dash. There is no space around the dash. En dashes are also used for compound adjectives. You would also use an en dash when you have a compound adjective, one part of which consists of two words or a hyphenated word.

Figure 6.7. The en dash, approximately the width of the captial N, used to indicate passage of time or for compound adjectives.

The em dash is used to separate a parenthetical break in the sentence.

In the days of the typewriter an em dash was conveyed with double hyphens and many people have yet to unlearn this habit. Fortunately, when you place a text file in InDesign double hyphens are automatically converted to em dashes, but you're still likely to encounter all manner of other approximations of an em dash. One of your first tasks is to fix such problems using Find/Change.

Em dashes should not touch the characters that precede or follow them. Optionally you can put a thin space (Cmd+Shift+M Ctrl+Shift+M) around em dashes. A regular word space is too wide and in justified type will grow and shrink to achieve justification.Thin spaces are of a fixed width.

Figure 6.8. The em dash, the Big Kahuna of the dash world. 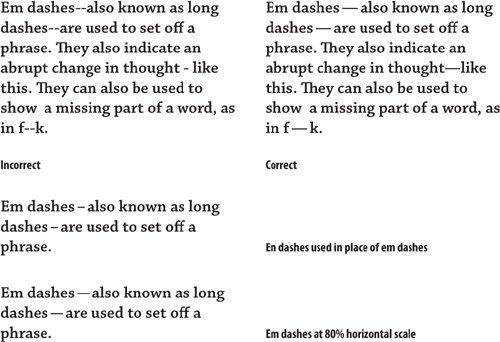 If you find an em dash too wide and feel that it creates an unsightly hole in the text, opting instead to use an en dash or an em dash with a reduced horizontal width (80 percent works well) are good alternatives. This is another job for Find/ Change (See Chapter 17).