There is no single recognized standard for classifying typefaces; rather there are several overlapping standards. For our purposes I'm going to use a simplified version of Adobe's type classification, showing three examples of each category.

Named after the first Roman typefaces that appeared in Venice around 1470, Venetian typefaces were initially designed to imitate the handwriting of Italian Renaissance scholars. Distinguishing features:

Garalde typefaces include some of the most popular roman styles in use today. Distinguishing features:

Script typefaces mimic handwriting by joining letters with connecting lines. For this reason, scripts require extra attention to the kerning of their letters. Also, you never want to set a script typeface in all caps.

Representing a move away from letter shapes based on handwriting, transitional types were the first typefaces to be drawn as shapes in their own right. They represent a transition between Garalde and Modern (Didone) typefaces, and contain aspects of both. Distinguishing features:

Named after Firmin Didot and Giambattista Bodoni, Didone typefaces were a response to improvements in late 18th Century paper production, composition, printing and binding, which made it possible to develop typefaces with strong vertical emphasis and fine hairlines. Distinguishing features:

With the Industrial Revolution came the increased use of posters, billboards, and other forms of advertising, and the need for bolder, more in-your-face typefaces. Slab serif typefaces were originally called "Egyptians," reflecting the public's enthusiasm for the archeological discoveries of the time. Distinguishing features:

The first sans serif typeface was issued in 1816, but it wasn't until the 1920s, with the influence of the Bauhaus and de Stijl art movements, that sans serifs became popular. Within the broad category of sans serif, there are four sub categories: Grotesque, Neo-Grotesque, Geometric, and Humanist.

The following classes of type all play a supporting role:

While typefaces in this group incorporate elements from many styles, they are most effective when used in large sizes for display purposes, such as headlines and titles.

In addition to using the Type Tool to select a range of text, you can also use the Selection Tool to select a text frame (or frames) and apply the same formatting options to the whole frame, including any overset text.

These typefaces are sometimes referred to as Old English or Gothic. They were used for text in Germany until World War II, but are now primarily used as display type.

Ornamental typefaces contain decorative ornaments or symbols and can be used to embellish or decorate documents. Some OpenType fonts include ornaments as part of their extended character set. 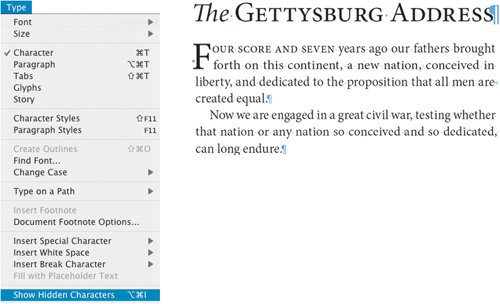 Work with your Hidden Characters visible. This is a good way to troubleshoot potential composition problems because you can see any forced line breaks, tabs, and multiple spaces that may have crept into your text. You can toggle this view option on and off by choosing Type > Show Hidden Characters or by pressing Cmd+Option+i (Ctrl+Alt+i).